What would iOS 7 been like if Steve Jobs was still around?

You are using an out of date browser. It may not display this or other websites correctly.
You should upgrade or use an alternative browser.
2

Just curious to know what the community thinks what iOS 7 would've shaped up to be like had Steve Jobs not passed away.

Do you think it would look better or worse than what they presented at WWDC. I always kind of thought Steve was pro Scott Forstall. I think if Steve was still alive today, then iOS 7 would've changed much if at all. I think he was a fan of skeumorphism design.

But who knows, that's just what I think. However, I for one welcome this new design and think it's a big step forward into the modern age. Although iOS 6 and prior were great in its days, I think its been long overdue that we needed a fresh new look. Kind of like how OS X transitioned from 10.0 to 10.8, each big release, the looks got more refined, more modern, more clean. Which I didn't see coming while Steve was around.

With all due respect I do miss Jobs and he is one hell of a CEO who stands out from the rest because he's a truly passionate about Apple and a very creative and likes to think differently.

I think it would be similar. However some of the Fisher Price icons, especially Safari, settings, game center wouldn't have made it. It would also probably have better original/unique features - something to wow users.
2

I think had Steve been around, that we would've have more skeumorphism apps, and the overall look and feel of iOS would be the same as it was from the original iOS on the first iPhone in 2007.

Steve+Scott vs Craig+Ives. I choose the latter, and think they are more open about change while the former were kind of stuck in the 80's.

It would have expressed something for people to love while adding new features. There would have been some kind of a magic moment or a 'how cool is that' ? This iOS feels like they're admitting they had to play catch up and just copied instead of really innovating on iOS and by doing so really kind of put android and iOS on the same page. I don't think Jobs would want anyone to ever associate an android device and it's flat design with thin fonts with an iOS device. Side by side jellybean and iOS 7 look way too similar. IMO iOS7 looks worse with the crazy colors and IMO again, sub standard icons.

Want to play around with getting rid of textures? Sure, everyone is acting like every single piece of iOS before 7 was full of textures everywhere, there was a lot of nice design aside from that everywhere you looked. Want to add a quick access card for commonly used device settings and app? Neat, maybe make it more clear next time though.

Jobs always seemed big on simple, big on selling an awesome idea or feature and making it seem like magic. iOS 7 doesn't do that, it seems like it adds a lot of things to tap on, it adds design for design sake, it looks like Android, it doesn't stand out anymore, it doesn't refine and improve on what already works and what kind of already defined iOS.

I don't know why they didn't just modernize the iOS theme as we knew it in 6, while adding new features. He probably would have made people so tense and simultaneously inspired that something great would have came out of it.

Aside from that, I think he'd be embarrassed to send this out, even as a beta.
M

No way Jobs would have ever signed off on this. I bet he probably shot down the first version Ive pitched back in 2005 in favor of the version that made it to production. Now that he is gone, this is what we get.
S

The look of iOS was getting a bit dated for me by iteration 5. Although I still love the simplicity I have felt for a couple of years now that something more radical (a la 7) was required.

I'm not sure how things would be were Steve still alive. No doubt Scott Forstall would still be it at the helm of iOS impeding its evolution. I'm sure Steve would have realised it was in need of some bigger change at some point in the future even if this wasn't this.

Not nearly as good as it is now. Steve would have held it back. Time to embrace the new Apple.

Doesn't matter really. Steve is dead (rest in piece). All that matters is here, now and the future.
W

I just can't believe the direction it's headed now with Job's gone. iOS 7 is just a frankenstein mess. The forstall UI components were never designed to work with flat style designs and mr. Ive's has no choice but to hack it in.

It may look "flat" and clean, but it's atop the same exact core components. It just looks bad in some places and worse in others. 6+ years of ground up work from Forstall out the window and hacked up by some british knight.

Job's would probably flip his desk over if this iOS 7 beta was introduced to the world in this state.

This will be the iPhone's undoing. OS X on the other hand is awesome. I can't wait to use 10.9.
R

Job's would probably flip his desk over if this iOS 7 beta was introduced to the world in this state.
Click to expand...


God that would be beautiful to hear.

Anti-Lucifer said:
Job's would probably flip his desk over if this iOS 7 beta was introduced to the world in this state.
Click to expand...

Amen. Its a disaster.

I don't think he would have allowed any of it. His obsession with perfection wouldn't allow a lot of design elements with iOS 7.
D

Don't know but I do think that Johnny did a great job with the new OS.

Jobs and Forstall were close, so of course iOS wouldn't have gone in this direction. Forstall would still be in charge of iOS and Ive on hardware. They'd probably have added something new but I imagine iOS would still have kept the same design.
E

I have to chuckle at those of you who think the iOS 7 color scheme is somehow un-Steve.

Are you guys forgetting that one of Steve and Jony's most successful collaborations that brought Apple back from the dead was this?

efice32 said:
I have to chuckle at those of you who think the iOS 7 color scheme is somehow un-Steve.

Are you guys forgetting that one of Steve and Jony's most successful collaborations that brought Apple back from the dead was this?

Yup. Also the fact that the Isaacson biography quoted Jobs as saying he'd basically structured Apple to ensure that no-one could tell Ive what to do. Jobs and Ive were a lot closer than Jobs and Forstall. 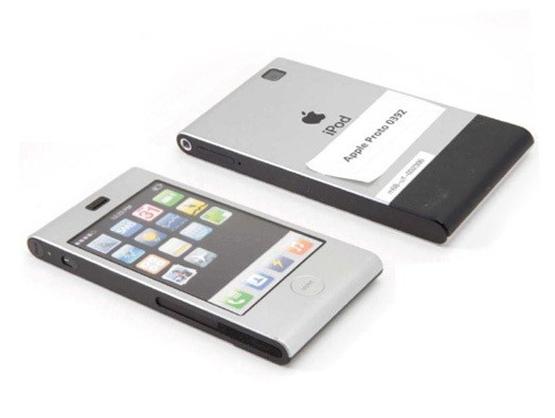 This is an iPod/iPhone prototype from 2005, which Jony Ive worked on (obviously).

Look at the dots for signal strength and some of the icons. Ive's idea for "iPhone OS" had been blocked by the Jobs/Forstall combo for some time now it seems. It's worth remembering though, the words of Laurene ... "Everyone is Steve's life is replaceable. Except Jony".
E

I'm so disappointed with iOS7. Jobs would be too.

It wouldn't look like Microdroid and have stupid looking useless 3D browsers that's for sure.
R

212rikanmofo said:
Steve+Scott vs Craig+Ives. I choose the latter, and think they are more open about change while the former were kind of stuck in the 80's.
Click to expand...

Steve Jobs created the 80's. The Apple II in every classroom was the basis for so much techno geekiness that prevailed in fashion and music throughout the decade.

He definitely defined the 00's with the iPod/iPhone AND the pervasive Apple laptop/Starbucks hipster.

And even (but to a lesser extent) some of the 90's with his involvement with Pixar.

Steve Jobs was a major component of American style and culture for three decades. What other tech company/CEO can be even remotely credited with having any style whatsoever?!?

There is no way Steve would have allowed iOS 7 to look the way it does. If he wanted to change the look of the UI, it would look similar to the latest FlatIcons update. That's how you do flat without taking away the beauty of iOS.
You must log in or register to reply here.
Share:
Facebook Twitter Reddit Email Share Link
Register on MacRumors! This sidebar will go away, and you'll see fewer ads.
Sign Up
Top Bottom