Which Bluetooth Keyboard do you use?

Is anyone using a Bluetooth Keyboard for the iPad? If so, which keyboard? How well does it work?

I'm thinking of getting one, but the one with the best reviews on Amazon (iGo Stowaway) apparently doesn't work with Palm or Blackberry so I don't know if that one would work for iPad either.
E

I have the Dell-branded version of the iGo Stowaway; I believe they are identical except for the branding. It works with my iPad.

2007 Apple BT keyboard -- works a treat! I use it mainly when I am planning to type lengthy emails and such. A lot of the time I just use the iPad's own keyboard, though. It is very quick and easy to turn the BT keyboard on or off when wanting to switch back-and forth between keyboards.
U

I have both the 'white full size' and the 'iPad mini size' Apple BT keyboards..

...both paired...I have used the iPad mini BT one extensively and have no complaints...

Just got this off ebay and it works very well.

Setting up you have to hold down the Ctrl, Fn, Fn (both blue and green) to make it active. Then you enter the numbers from the iPad.

It's very small and light. Has a case and there are some more popping up on ebay.

I won't be trying to type much on the iPad anymore. Much faster on a keyboard and this little guy is absolutely perfect. Light touch and easy to take. It's very light and portable as it folds up. Has a nice leather case.

Romanesq said:
Just got this off ebay and it works very well.

Setting up you have to hold down the Ctrl, Fn, Fn (both blue and green) to make it active. Then you enter the numbers from the iPad.

It's very small and light. Has a case and there are some more popping up on ebay.

I won't be trying to type much on the iPad anymore. Much faster on a keyboard and this little guy is absolutely perfect. Light touch and easy to take. It's very light and portable as it folds up. Has a nice leather case.

Can you take the dock/stand off of it? Or does it fold up or something.
P

dc46dc said:
Can you take the dock/stand off of it? Or does it fold up or something.
Click to expand...

I just received an iGo Stowaway Ultra-Slim that I got from eBay. The stand is designed to come off. To remove it, open the keyboard, lay it flat and twist the stand horizontally to the right or left. It will snap off and become free standing. You can leave it behind if you don't think you'll use it since it doesn't form part of the closure mechanism for the keyboard.

Yup, I removed it and it's really nice and works great. It's small light and folds up and well you can't beat it IMHO.

I use the Apple Bluetooth keyboard, along with a separate dock/easel/stand. I find that the ability to choose the distance between the keyboard and the iPad, in addition to having to carry far slimmer products, is greatly beneficial.

Yup, I removed it and it's really nice and works great. It's small light and folds up and well you can't beat it IMHO.
M

I'm using the apple BT and loving it. Although I have to admit I dont really use it that much unless writing long notes in class.
N

I bought the Apple bluetooth keyboard early after the iPad. True, it is a great keyboard, as I knew from using it with my iMac. But it is quite large for a little bag that I like to carry my iPad in. Apart from the weight, if I carry devices of that size I might as well take the MacBook. So I looked for alternatives.

First I tried the Freedom Pro. I never expected the function keys to work and of course they didn't. But the things that annoyed me the most were some of the small keys and the overall poor quality. The space bar(s) was tiny and I kept missing it. Likewise for the backspace and Control keys. The feeling when typing it was that the whole thing was fragile and the key depression depth was not great either.

But today I received in the mail a used Think Outside Stowaway ultra-thin Bluetooth keyboard. I wish I hadn't been so stingy now, as I will probably sell the Freedom Pro at a loss. Most readers will know that for some reason Think Outside have discontinued their range of portable keyboards. Sure, there are heaps of alt keys designed for use on Symbian or Windows machines that don't work on the iPad, but they are not separate keys as they are on the Freedom Pro, and they don't exist on the Apple BT anyway. I also don't mind pressing a Fn key every time I want to key a number because I don't do it often. The feel of the keys is superb, as is the spacing - I can touch-type now with many fewer mistakes than with the Freedom Pro.

The Stowaway also makes the Freedom Pro look like a brick, it is that small and light. I detached the phone/pda stand and I have put that in a drawer. Although it does dupport the mass of the iPad, it is clearly not designed to gold such a large device and I was worried it could go flying with a knock form someone walking past, and in any case I don't want to get my iPad all scratched by keeping it out of a case, even if I do carry it in a bag (I use the STM Scout).

There are still some on ebay - new or used - so I would snap one up. I do hope that ThinkOutside resumes manufacture of these, and updates them to incorporate a few short cuts that work on iPad.
C

I have the apple bluetooth, but it is too big to carry around. I have had a freedom, it broke, the batteries leaked and fried it. I've had another Bluetooth keyboard but the layout is too awkward to use. I found my dads six(or more) years old igo stowaway. The igo blows everything else away! It connects to the iPad after opening the keyboard, waking the iPad automatically after three seconds or so, and types like a real keyboard. The design is amazing, extremely well engineered and durable. The other two foldable keyboards I have are flimsy compared to the igo. The igo is the only way to go, amazing keyboard that performs like a full size and folds into something that can be carried in a shirt pocket. I cannot find the stand that comes with my igo, but I have seen a pic online where the stand is able to hold sn iPad.

I too don't get why Think stopped making the igo, it is a design\engineering masterpiece. Do not waste money with other keyboards besides the apple bluetooth. Pick one up as soon as soon as you can, what a gem it is.
N

For me, it was between the Apple BT keyboard and a folding version. I chose the Apple BT keyboard because it was functionally the best keyboard. I am familiar and comfortable with the typing as I have a MacBook and the transition to the BT keyboard was very easy. I figured I could use it with my MacBook as well, though I do prefer the size of my wired keyboard as it has the number pad. I thought the folding keyboard would suit traveling but it sunk in that if I felt I needed a keyboard with me *that* often then perhaps I just would need a laptop. I have the keyboard for use at work or home but not on the go, hence, no need for a folding keyboard.

I have noticed that the range on the Apple BT keyboard is surprisingly impressive. It has a nice price point too.
N

I'm using the ultra slim igo stowaway. Originally I got it a few years ago for another device (forgot whice one, ha!), and haven't used it for quite a while, and perhaps forgotten about it. I just got my iPad a few weeks ago, and was thinking whether I wanted to use a keyboard for those longer documents.

After reading this thread, it reminded me about the igo that I already had. So I tried it out, and it worked with my iPad! Now when I go to Amazon, I noticed this keyboard has been discontinued, which is a shame. It's a very nice keyboard, and great for traveling. I saw on Amazon that some 3rd-parties are still selling this keyboard, but for close to $200! Then I checked my order history to see how much I paid for mine, $30!
P

I got lucky and bought 2 more iGo ultra-slim keyboards from eBay for £30 each, one for myself and one for my Father. I then sold my original one, which wasn't in such good condition. Here are a couple of photos I used for the sale on another forum so you can see what the keyboard is like. 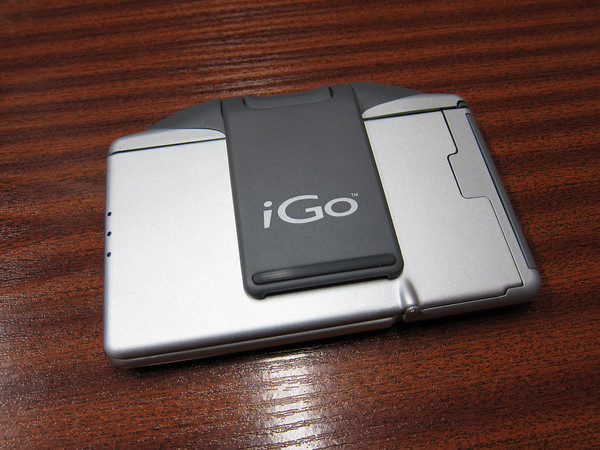 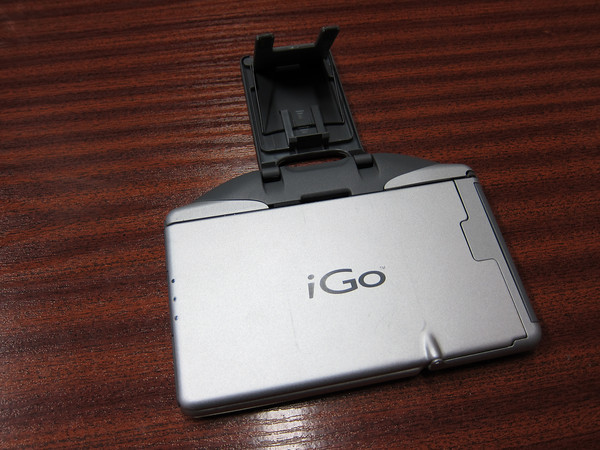 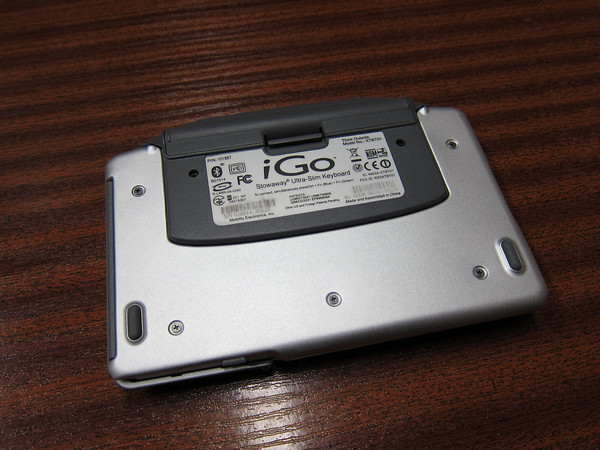 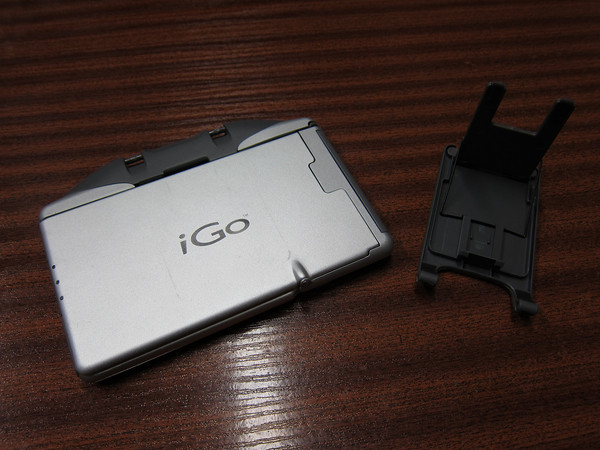 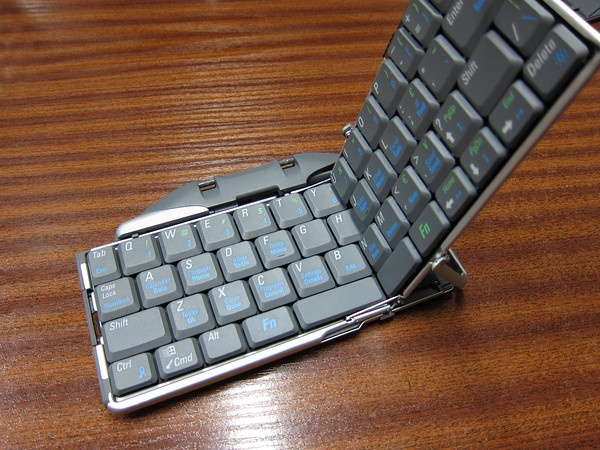 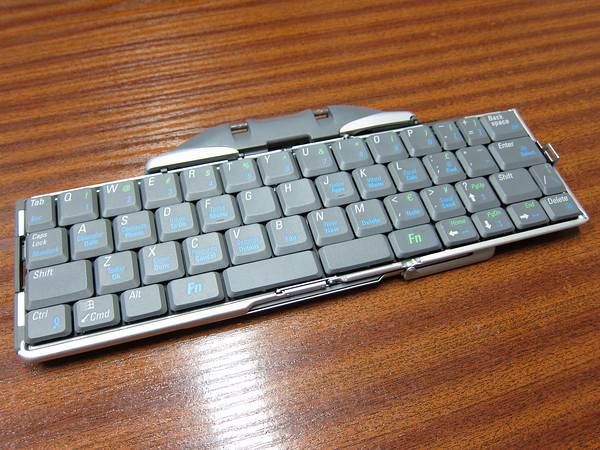 Quite an impressive design, so well thought out and built. I am still so impressed when I flip it open and type on it. Does the stand hold the iPad at all like I have seen in a picture? I cannot find my stand.

I've been using the Apple Keyboard for a few weeks now and love it!

The igo is nice. I use to use it with my WM phone when typing in word...still have it

I have the igo and apple bt one,

Apples bt one is excellent, range is awesome.
N

Does anyone know a place to purchase a iGo Stowaway or equivalent? As others have mentioned, it looks like it has been discontinued and only available for $150+ on eBay, etc.

Apple Bluetooth keyboard here...with a GREAT sleeve/case off of Ebay which keeps it protected in my bag.

Plus either (depending on my mood), the iPad in a Belkin Flipblade or in a carbon fiber case that looks/functions exactly like the Yoobao Magic.
N