It doesn't matter which it is - QS, MDD, G5, 08mb - he owns them all & the price of admission is attention. Lots of attention - about 10 to 15 minutes before any work can be done via mouse & keyboard. Photographic evidence - notice the wrist lock/lay on keyboard combo move, one of his go-tos if he doesn't opt for the key-board lounge chair strategy instead. 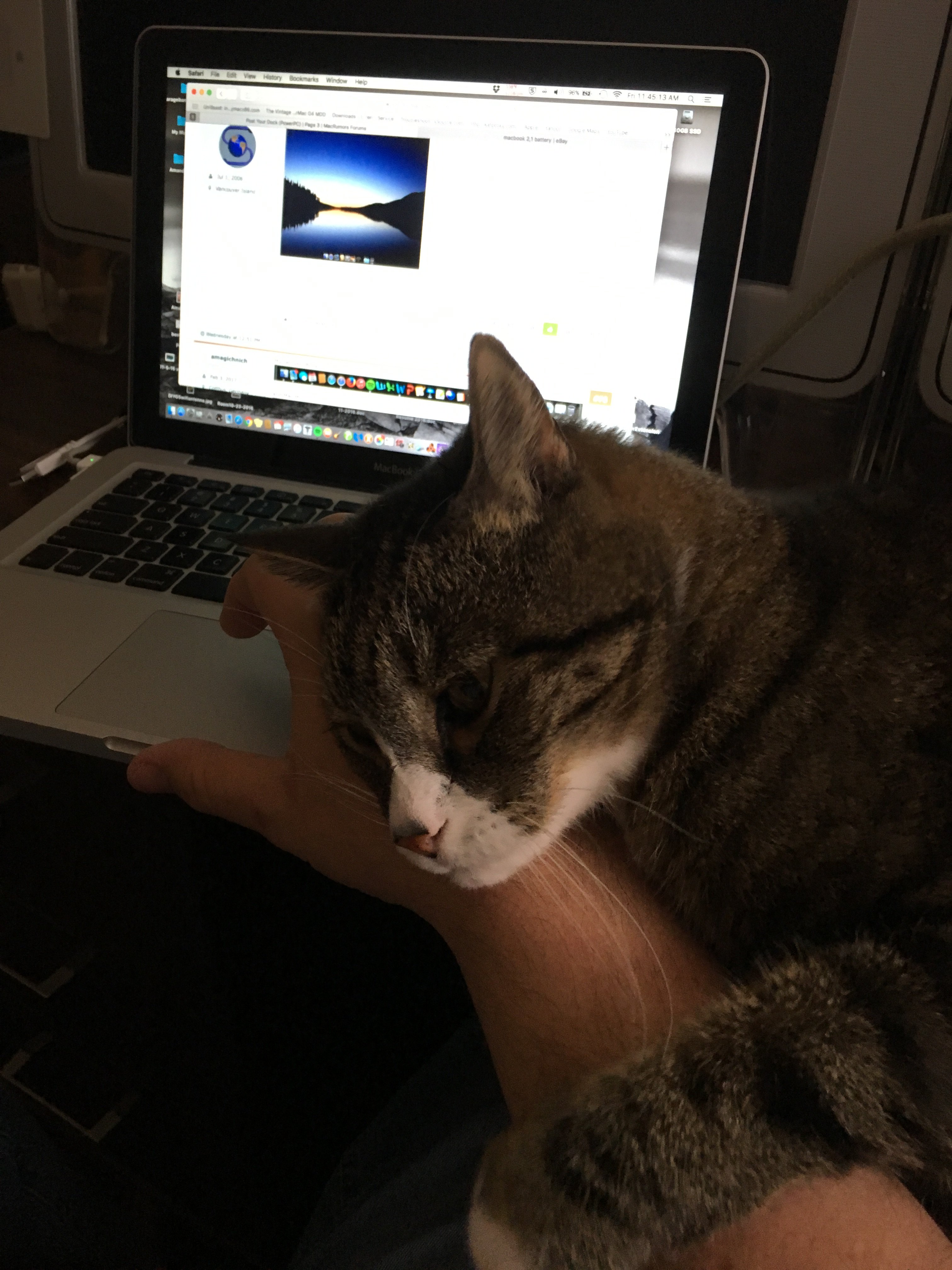 He could care less about my w10 gaming box oddly enough - weirdo.
Reactions: MysticCow, beanboy89, MagicBoy and 3 others

I used to have the same problem with Treacle (the family cat). Get a ThinkPad out and he'd ignore me!
Reactions: 1042686

This is Kenny. I call him "little duder" most often," K-dawg", and "butthead" when he's being ... well a butthead. My next cat I think I will call him Macintosh.
Reactions: MagicBoy

He would like the smelly PB or early white iBook keyboards for sure ...
A taste of human.
Lovely cat!

That's soo cute! If I have a cat that's cute but annoys me, I'll call him "Sawtooth". I love my Sawtooth but it's such a pain that it pisses me off everytime

I love cats. We've had cats since 1983 when my dad was forced to accept the passle of 13 cats attached to the rural home we were renting in nowhereville. Up until then, his 'allergies' always prevented us from having a cat.

That said, I have never had a cat remotely interested in any of my devices, keyboards or electronics. Possibly that is because, except for couches, chairs and beds our cats have always been trained not to jump up on things (it's a no-no for cats to be on the kitchen counter or any table).

The current cat is an orange/white tabby who ended up with us out of the blue. We got a knock on the door and two kids asked if we wanted a cat. My wife misinterpreted my look and said 'yes'. So, now we have another cat.

Which is fine. Turns out the kids were moving and mom was taking them door to door to see if anyone would take the cat (because he wasn't going with the family). They had tried to dump him in a park but he followed them home, which pissed off the mom.

So, a good thing for him. We spay/neuter all our cats so I didn't take their word for it when they said he'd been fixed. Their lie cost me $45. Oh well.

This cat's always got to be in the middle of things. He parks himself in a central location between everyone in the house, even if we are in opposite rooms. It's taken him a few years to get the fact that no one is going to kick him. I guess that was a thing in his former household. You don't want to pet him too much because of that as he turns it into biting you.

Here he is two years ago. Only difference now is he's probably a little bigger. His name is JJ. Not the name we chose, but the name those kids gave him. 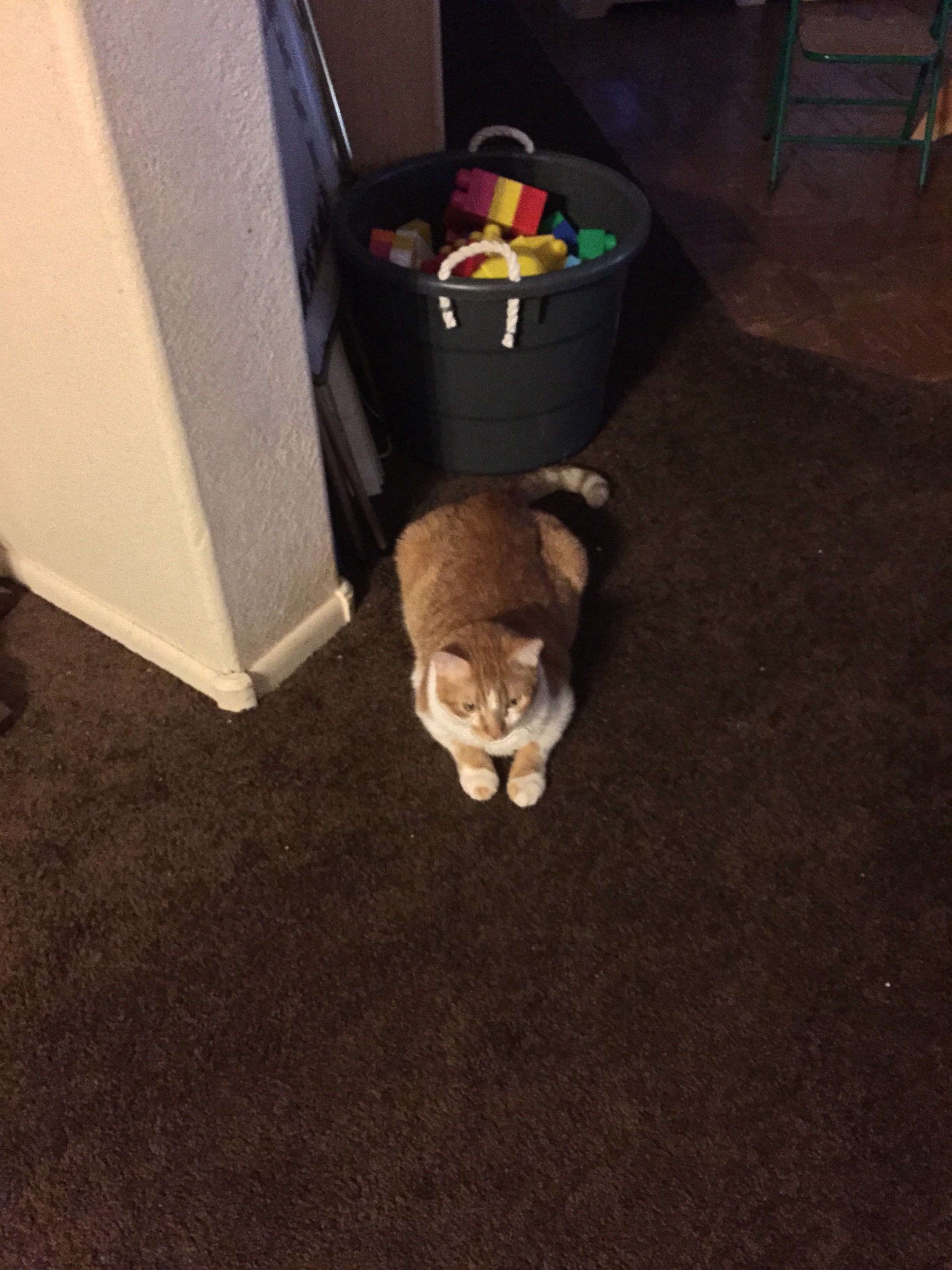 Kenny was a scrappy stray rescue. He wandered into my garden when he was a little kitten (around 2005 iirc) while I was weeding. I only noticed when he took a humongous poop that stunk up the garden. He was tiny too - how something so small could make such a huge stink, I have no idea lol. Anyhow, he's been with me ever since. My other cats at the time were all older females that took him in. I have another cat suki (another rescue & the last of those old females) but she is now really old and has bad arthritis & moderate heart failure so getting up on tall stuff is almost impossible unless I put her there. She sleeps most of the day except for an hour or so of social time, eating and then back to her overstuffed cat bed - but I guarantee you come 530AM, she is at my bedroom door making all sorts of ungodly noise because she wants to eat - every-single-day-for-the-past-14-years lol. Truthfully, the both do. It's a 530am tag team event lol. I dont know her age but when I got her years back, the vet estimated her to be around 3-6. Anyhow, Kenny on the other hand is a butthead and gets up on stuff all the time. Mind you he's not supposed to but he does anyways. He's big and stupid and friendly as all get out, so you can't really get mad at a cat like that. They both are heavily socialized with people and have great demeanor, are super friendly etc.
Last edited: Feb 24, 2017
Reactions: eyoungren and Zobrien 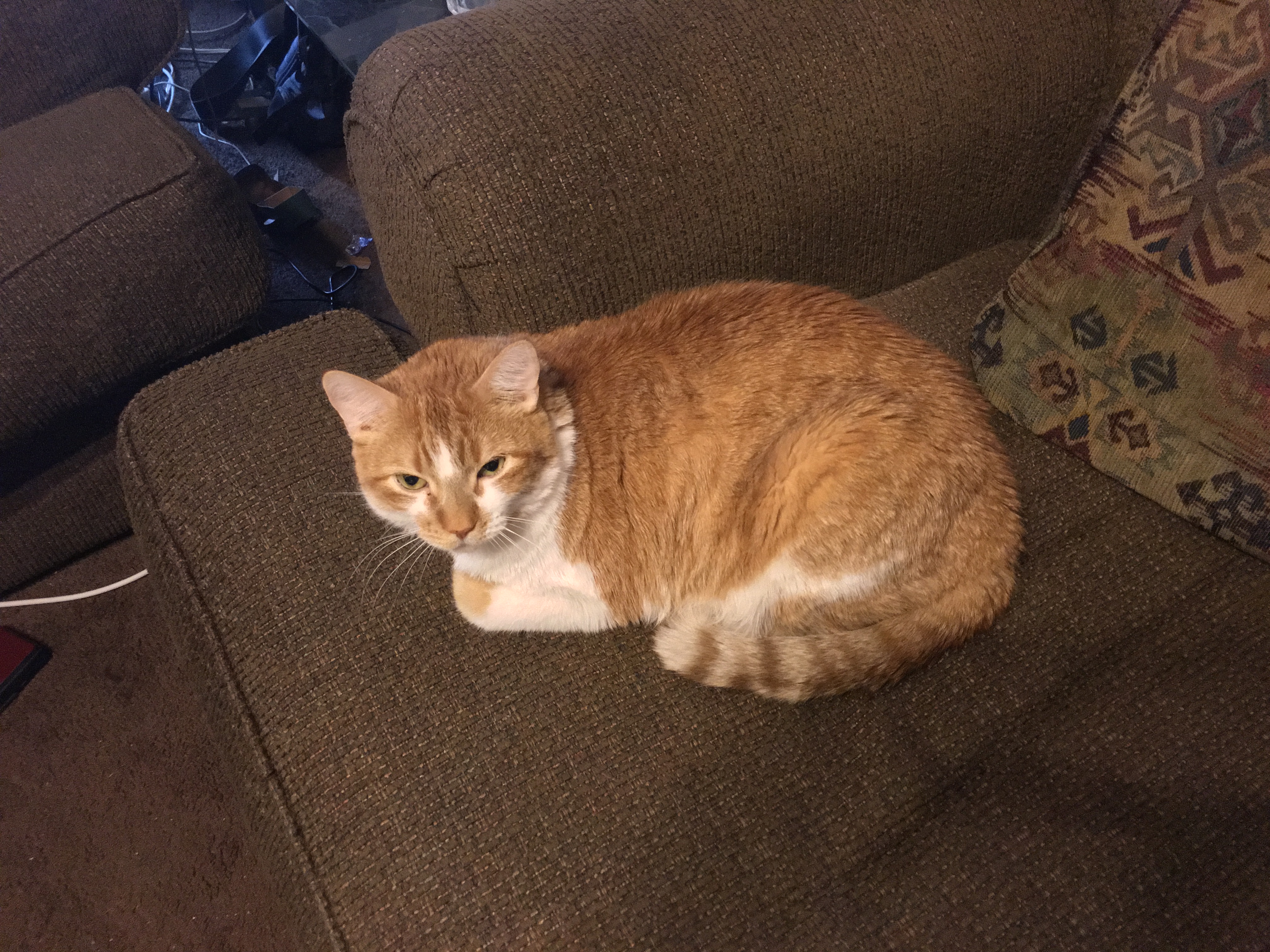 You should get him an iMac cat bed.
Reactions: eyoungren

MysticCow said:
You should get him an iMac cat bed.
Click to expand...

He would probably flip me off and then go lie down on my side of the bed (which he does anyway).

That's what he's doing here anyways because that's MY spot on the coach he's lying down on.

awh! We're doing cats now? I can do this! I've got an all black cat named Jasper who likes 2008 white macbooks. For a while my dad's skype status was about 10000 characters of JJJJJJJJJJJJJJJJ because he slept on the keyboard. Now, he is much too big to sleep on any laptop comfortably.
Reactions: 1042686 and eyoungren

128keaton said:
awh! We're doing cats now? I can do this! I've got an all black cat named Jasper who likes 2008 white macbooks. For a while my dad's skype status was about 10000 characters of JJJJJJJJJJJJJJJJ because he slept on the keyboard. Now, he is much too big to sleep on any laptop comfortably.
Click to expand... 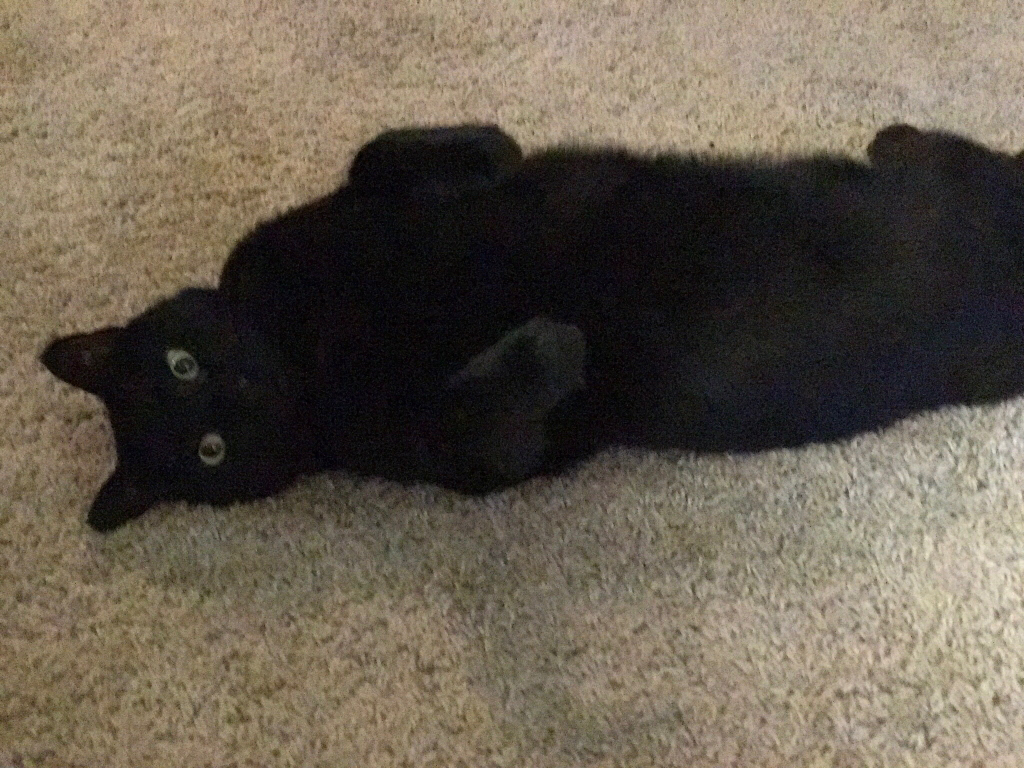 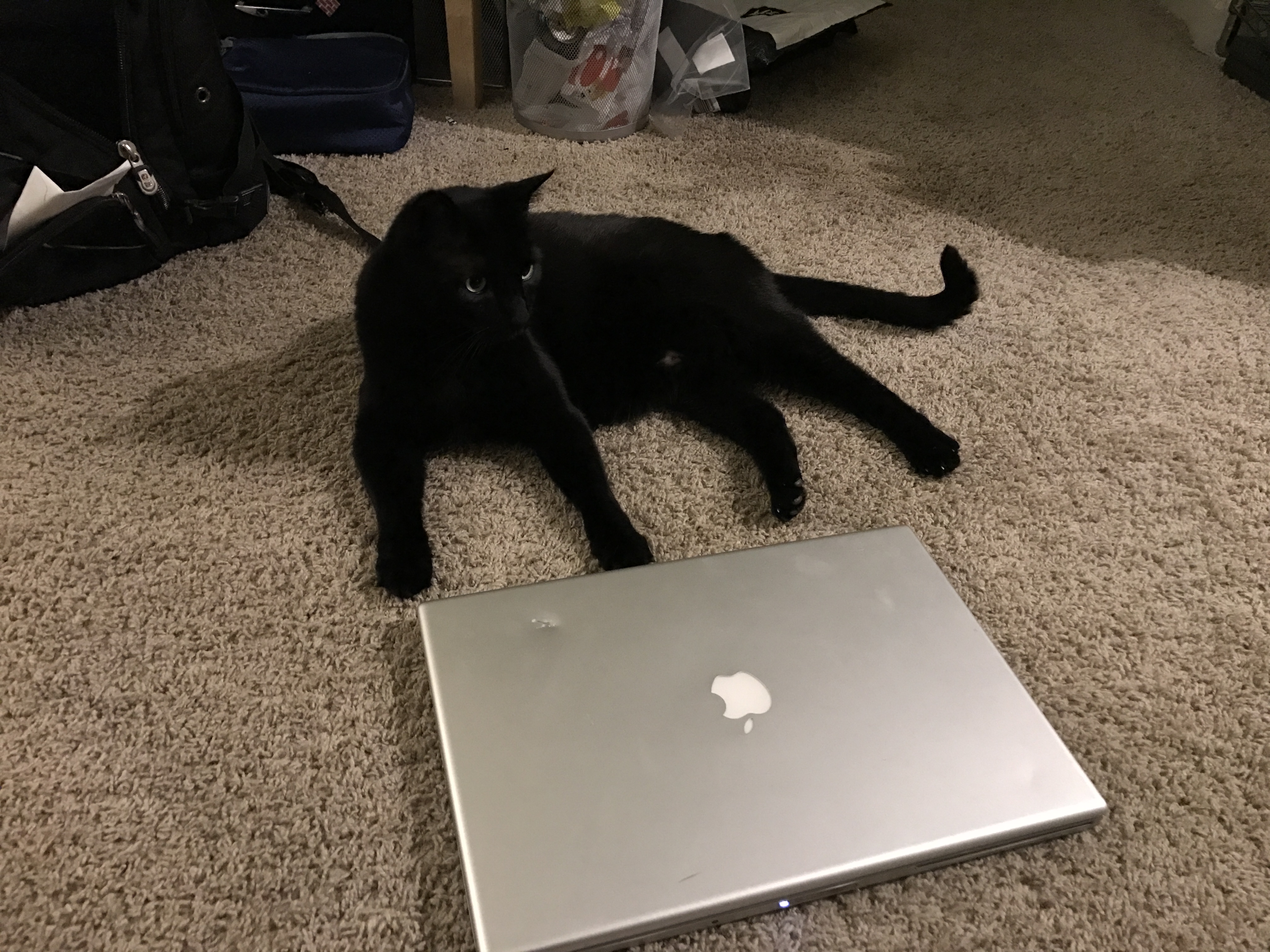 He could totally own that MBP. His own little silver seat warmer. JJ looks like he is contemplating someones delicious demise.