Four years ago, I was about to start my first teaching job and needed a small, cheap, portable MacBook to tote between school and home. I settled on a used 2011 11" Air (1.6GHz i5, 2GB RAM, 128GB SSD), which was a pretty solid deal for $400 in 2015. This little computer has seen me through nearly four years of teaching at this point, five major versions of OS X (I got it with Mavericks, it's running High Sierra now), and it continues to perform flawlessly. Perhaps not quite as quick as it used to feel, but certainly not slow for my needs.

I initially got it as a machine to do basic Office productivity tasks on, although I have recently shifted a lot of programming and light CAD work onto it, all of which it handles without a hitch. It does indeed bog down when I have upwards of 7-8 apps running on it, or I go heavy on the Safari tabs, but with 4-5 tabs open, Word, TextWrangler, Terminal, and iTunes cranking out some tunes, it works beautifully.

All in all, not bad for a laptop going into its 8th year. Speaking of, this machine has aged incredibly gracefully. Not only did it just recently lose official OS X support, but its battery is holding up very well! It's the original battery, and at eight years old and 420 cycles, it still holds 86% of its original capacity. It'll happily go for 4-5 hours of usage on its battery, plenty to get me through even the worst faculty meeting.

How many of you out there still have your old, limited, but still surprisingly productive 2GB Airs in service?
Last edited: Apr 19, 2019
Reactions: Howard2k

I don't, and quite frankly I would probably go crazy with just 2 GB of RAM. However, I can see how for some people and some workloads it can be more than enough. That said I would like to add that you have not yet lost official macOS support since High Sierra is still officially supported on your MacBook Air and is going to receive security updates until the introduction of macOS 10.16 in late 2020.
Reactions: ScreenSavers
Comment
W

Congrats. I have 2007 MBP with 2GB but have not updated OS since Mountain Lion.
Comment

I'm floored that you can manage 4-5 hours on the original battery. I also have a 2011 with the 11" screen (though I bought it with 4GB of RAM) and I was lucky to get 90 minutes. I could watch the battery percentage in the menu bar count down as if it were a clock. I just replaced the battery with a Newertech one from OWC and I'm getting around 3-4 hours now. I vaguely remember pushing 5 hours when it was new with mostly web browser usage. But maybe with a few more charge cycles, I might get better life.
Comment

Apple should give you a new one just for persistence and perseverance! Perhaps they could even bump it to 8GB for you.
Comment
J

I am! My wife and I both have that same model and it’s still going strong for both of us for most use.

The design of the old 11” has been so great and so reliable that I’m looking forward to the increased power with hopefully the same longevity.

Given what I use it for, the screen size isn’t a big deal, and I have dual monitors with a desktop at work, so I really use it for portable writing and email.
Reactions: Macdctr
Comment

I will say, one thing that's helped keep this little guy happy is keeping it at 10.11 El Cap. I tried 10.13 High Sierra on it for a few weeks, and it seemed notably slower than El Cap. I've since rolled it back, and it's been performing happily on it. I'll likely keep it on El Cap until things like Dropbox drop support for it in the future, or until this little guy stops doing everything I need of it. I'm amazed at how well it manages memory with a bunch of apps and several tabs in Safari open! 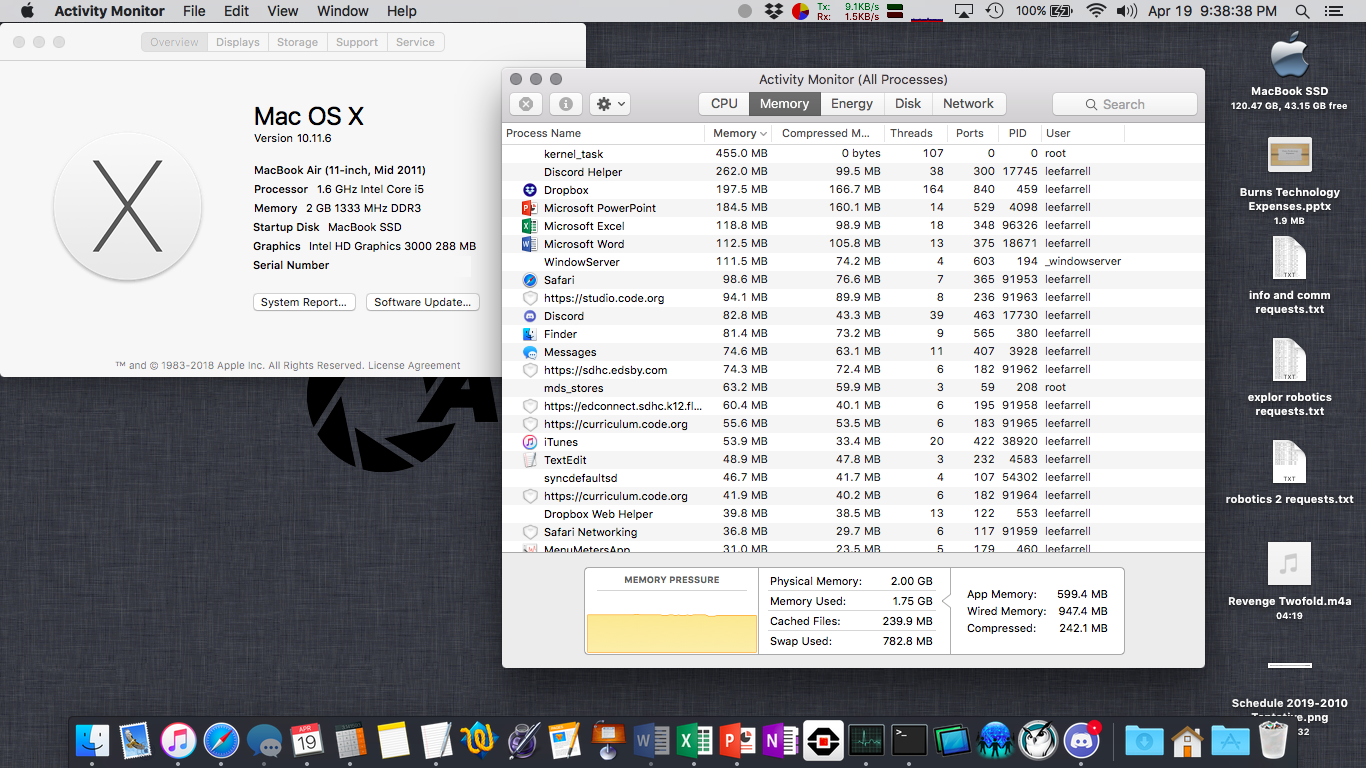 I use my 11" quite often, though it no longer runs macOS. It's a nice little laptop.
Comment
T

Yep! I'm! Late 2010 MBA. Recently got that machine from a friend for free and it's my first MacBook ever lol
I've formated the system to High Sierra, installed Photoshop on it and I'm amazed how good the built-in screen is.

Saw a thread on this forum of a method to install Mojave on it, but I'm wondering if worth it because of the RAM limitations. Any thoughts?
Comment

Tavisco said:
Yep! I'm! Late 2010 MBA. Recently got that machine from a friend for free and it's my first MacBook ever lol
I've formated the system to High Sierra, installed Photoshop on it and I'm amazed how good the built-in screen is.

Saw a thread on this forum of a method to install Mojave on it, but I'm wondering if worth it because of the RAM limitations. Any thoughts?
Click to expand...

Ehhhhhh, I'd be iffy about Mojave. I'll be honest, I ran High Sierra on my 2011 for a month or two earlier this year and while it was alright, it was definitely less alright than El Cap. I ended up rolling it back to El Cap a while ago, and it's been smooth sailing ever since, so I'd be hesitant about Mojave.
Comment

Don't have a MBA, but I do have a 2008 uMB with 2GB RAM. Runs terribly on anything newer then El Cap, and runs mediocre on anything past Lion. I think it's more due to the slow hard drive than the RAM. My 2008 iMac has only 3 gigs but runs El Cap no problem, it has a 7200rpm drive.
Comment

that's old. I inherited a MBA 13 mid 2013 from my niece. It's lagging when ever I switch to a tab on my browser that runs videos. That's ok at least I don't have to deal with any KB issues lol.
Comment
You must log in or register to reply here.
Share:
Facebook Twitter Reddit Email Share Link
Register on MacRumors! This sidebar will go away, and you'll see fewer ads.
Sign Up
Top Bottom