Why Google Wallet failed, and why Apple Pay will thrive

Here is the problem that I believe Google faced and where Apple will thrive.

Carrier Support
Google let the carriers control everything. When GW first came out, it seemed like the only way you can get a GW capable phone was switching to Sprint. That left out AT&T, T-Mobile, and the big elephant in the room, Verizon. The carriers instead decided to come out with their own, half-assed, solution, that doesn't even work all the time.

Advertising
They did a little advertising here and there, and partnered with just a few stores when it came out. The big turn off, was once, again, forcing people to switch to Sprint to get the then new, Nexus S to be able to use the feature. Nobody was going to do this. 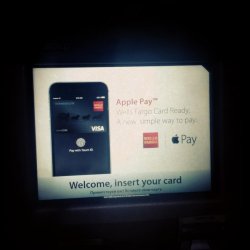 Apple on the other hand, even when I pull up to the ATM at my bank, I am greeted with a large Apple Pay advertisement, I got something in the mail from my bank, and I got emails from my bank about this. Apple has got the advertising front of this, very well covered.

Store Support
It looks like Apple even got enough turbulence to influence cashier training on accepting this as payment. McDonalds employees before would not even know what to do if a customer had tapped their phone, but here comes Apple, and I ask employees at the store, and they already know whats coming, and even got McD's to install a special Verifone pedestal just for the arrival of Apple Pay.

Contrary to popular belief, it seems like most stores do have NFC, the stores just don't advertise they accept it. At countless grocery stores here in the Phoenix area, including Whole Foods, and Basha's, they take NFC and contactless card payments just fine. Here is where the problem lies:

When approaching the credit/debit card reader, the customer is prompted "Please slide card" or "Insert/Slide card" for places that have Chip & PIN. Absolutely nowhere on the screen or any stickers at all, does it mention contactless payment what the customer has to do and I tested this, was TAP THE CARD TO THE TERMINAL SCREEN ANYWAY and the transaction, lo and behold, WENT THROUGH! This inconsistency alone will make it so it appears to customers, that they don't take contactless payment. - The average John Q. Shopper will not know that the terminal takes contactless cards, and nobody, unless you're me, would tap the card anyway to try it out. The only reason I knew it has NFC? The store used the Verifone MX915, and I know the model has NFC. No normal consumer will KNOW THIS!

Walgreens done it right by replacing the slide card message with , "Please slide, Insert, or Tap your card or phone." - Yes the message is long, but it emphasizes that the terminal does indeed take contactless payment.

Hopefully with the launch of Apple Pay, they will start labeling these "unlabeled NFC readers"

The influence behind Apple
They popularized FaceTime, Tablet computers, iMessage, and more. If any company can make something popular, it would be Apple, as people would buy ANYTHING with an Apple logo on it. They will use this service because it has an Apple logo in it.
B

Google Wallet and Apple Pay are two completely different tools, services, and scopes of what they do.
Comment
M

dontwalkhand said:
When approaching the credit/debit card reader, the customer is prompted "Please slide card" or "Insert/Slide card" for places that have Chip & PIN. Absolutely nowhere on the screen or any stickers at all, does it mention contactless payment
Click to expand...

I agree - this is probably a significant part of the problem.

The customer may very well be aware of him/her having different ways of paying, but when only two out of the three options you might have is listed on the terminal a lot of people will draw the conclusion that those are the only two that can be used at that counter.
Comment
D

I think Apple also hit the credit card industry during a moment of weakness. The Target breach was a big black eye, and the industry knows that the US infrastructure isn't set up for the Euro-style 'chip' cards. Apple was a decent deal at the right time.
Comment

I sure hope it takes off, I REALLY want this!
Comment
M

1. Carrier Support. GW was supported by T-Mobile and AT&T, but not by Verizon. By carrier support I mean the carriers didn't care as they didn't know about NFC payment as it worked well in the EU. I had GW with my Galaxy Nexus in 2012. It worked at McDonalds, CVS Pharmacy, (perhaps Walgreens), Taco Bueno and a few other places.

2. Advertising. I agree advertising by Google was bad as they were at odds with the carriers.

3. Store Support. Only a few stores as mentioned above supported it. Nobody knew what it was. I had a few people stare at me while I was doing it at McDonalds back 2012.

Apple on the other hand has the support of the credit card companies in light of the recent CC hacks at Target and Home Depot. Plus Apple is marketing it like crazy.
Comment
M

dacreativeguy said:
Apple was a decent deal at the right time.
Click to expand...

Yep, timing is everything.

I have a friend in the music industry (former artist, now primarily a song writer that makes most of his living from music in commercials, intro-music for TV-shows and the like) that have tried to launch services similar to Spotify twice. In other words: Pay a fixed monthly fee and get access to 'all you want'. I have always loved the idea.

His first try was way back in 2000 when Napster was all the rage for (illegaly) sharing music. That did not work well - way too early. He tried once more later in the 2000s - around 2006 or 2007, and burned through a significant amount of both his own and several large investors money - he is still in heavy debt. Same result.

Then Spotify comes strolling by in 2010 and takes the world by storm in just a couple of years with a more or less identical concept to what he tried to get up and running 10 years earlier. The market (and of course both artists and record companies that need to be on board in large numbers for something like that to work) probably was not ready until then.