why is my fan going crazy speeds?

in the last 48 hrs iv noticed that the fan on my mbp 13.3 is going crazy. that is, its constantly at 3300-4000rpm, whereas before it was at 1998rpm most of the time. added to this, my cpu is running at about 50-60% all the time. im checking activity monitor and there is nothing hogging the cpu as far as i can see. i've switched off everything but the browser, and i have no other accounts active. iv not downloaded anything recently that i would think has done this. and certainly iv dl'd nothing in the last few days.

previously, sometimes firefox would sometimes (although rarely) send it racing up to 80%, but im watching it and its taking up no more than 5% of the cpu right now. base of the enclosure is really warm.

its all very odd. any ideas why this might be?

nb i am running low on hd space ( i have 22gb of 320gb left) but its been this way for a few weeks. i realise i should clear out some stuff, but i dont think this is causing the problem here.

Have a look at Activity Monitor ( Applications / Utilities / ) and select All Processes and sort by CPU to see what the culprit may be.

image below uses sorting by CPU as an example 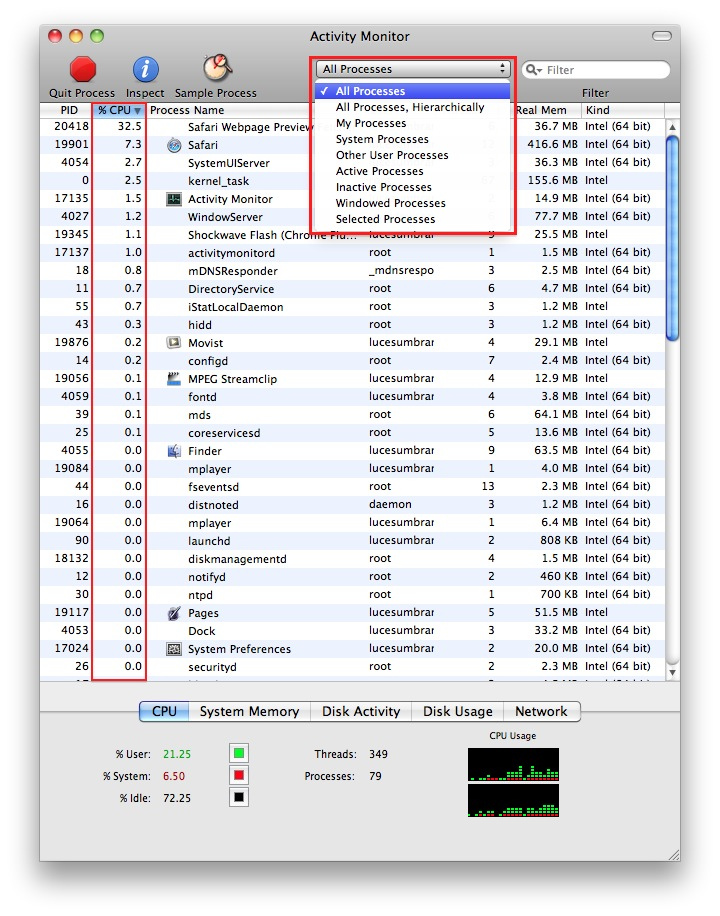 
Making The Most of Activity Monitor
J

When I upgraded to 10.6.4. I suddenly started experiencing the fan racing problem and high CPU usage too.

First thing I did was clear my desktop - or at least tried not to have it too cluttered (esp. pics, it's best not to have too many of them on your desktop). Secondly, I tried running OnyX and resetting PRAM, and apparently eventually it helped!

Here's how to reset PRAM: http://support.apple.com/kb/HT1379

You can give it a try.
S

thanks for the advice. i found the culprit under All Processes in activity monitor. something to do with some printer driver. Dodgy rubbish it was very resilient - even though i was in my admin account and tried quit process three times, it kept returning. i had to log into the account that did the printing and then open activity monitor and then authorise the force quit using my admin name. very odd.
You must log in or register to reply here.
Share:
Facebook Twitter Reddit Email Link
Top Bottom