HomePod Why is Siri sooooo dumb on the HomePod?

Why is Siri so stupid on the HomePod compared to iPhones, iPad, and watch?

My whole house is using Philips hue bulbs, lightstrips, motion sensors and dimmer switches and these all work 100% as expected when using all the motion sensors and switches...and the lights always work when I give a command to Siri via iPhones, iPads or my series 4 watch either in the house or even remotely away from home.

The annoyance I am having is Siri on the HomePod is really really stupid and comes back with “I don’t know what you mean” more times than doing as instructed.....this is me testing it purely with my many hue lights.

I have to say though, I do love the HomePod as a music speaker and Siri works great for music related commands.
C

Has the HomePod ever worked? What is the make and model of your router? If its worked before goto 2.

1. Make sure your usage is simple "Hey Siri" Room name Device name Function ex Hey Siri Dining Room Light On as show in your Home app. Words can be added turn on, flip on, grab the, etc but they aren't necessary. 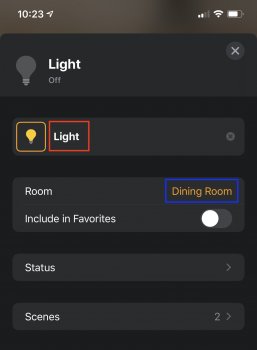 2. On your iPhone goto Home > house icon at upper left > Hubs and Bridges. Which Home Hub says "Connected"? And if its not your HomePod what does the HomePod say next to it? 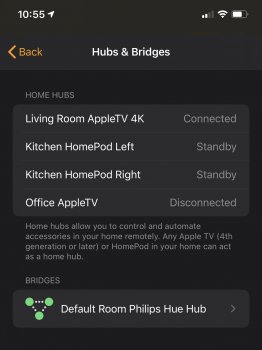 3. Before debating this, its actually usually the issue so at least humor me...Power cycle your router and since the Philips uses a hub power cycle it too. iOS/Mac devices do not communicate with accessories in the exact same manor. One working properly doesn't reflect all devices. A conflict in the network itself can prevent a device and/or hub from seeing an accessory (mDNS/Bonjour/etc), iOS devices will say "No response" but their native app may work just fine.

Of course power cycling the HomePods won't hurt however I would do that last just to isolate the problem for future reference.

That app allows you to see Bonjour services on your network. Not much help from the HomePod but still good to have for "no response" issues on a device...

Under _hap._tcp_ (HomeKit Accessory Protocol Transmission Control Protocol) you should see all your accessories (or single hub for multiple accessories such as Philips Hue). Under _homekit._tcp_ you should see your Home Hubs (including HomePods).

@cynics Thanks for your detailed reply.....I got my 1st HomePod a few weeks ago which was placed in my lounge and to be fair, the only lighting requests I asked of it was to control the lounge lights and they worked as expected.

I got another HomePod yesterday (a used one) to go into one of my kids bedrooms and once it was set up I started giving some lighting commands seeing as 2 other bedrooms are visible from where this HomePod is placed, and this is when I realised Siri was daft as a brush on HomePod....and posted my question.

So, after reading your reply I have made a couple of changes that might have caused some verbal command confusion: In the hue app, I had the room name as part of the bulb name too, for example:

So based on your screenshot I have removed the location from the bulbs name in the Hue app, I re-started the Hue hub and both of the HomePods and then started giving out a bunch of lighting commands and have to say that it has improved vastly...not 100% accurate, but I now think I know where most of the problems are coming from....my kids names or bulb names can be misheard or miss interpreted by Siri, as I happened to see what was being heard when my phone picked it up instead of Siri: 1 example is, when I asked: Hey Siri, Skye's window, Green......I saw my phone on the Siri screen as: Hey Siri, Skies window, green.....So Siri is sometimes hearing the word "Skye's" as "Skies"......totally different things which explains some of the stupid or incorrect results.

So, I don't know if the re-starts or the name changes was the biggest help, but either way Siri is working much better that it was last night....I would say 90% wrong last night compared to 10% wrong today.
Comment
You must log in or register to reply here.
Share:
Facebook Twitter Reddit Email Share Link
Register on MacRumors! This sidebar will go away, and you'll see fewer ads.
Sign Up
Top Bottom