Hi,
A friend gave me 2 blade, and 2 rack HD XServe units to refurbish and test. Please see the pictures. I know absolutely nothing about these. I do not know anything about servers except what they conceptually do.
2 units are A1009. I have all the drives, but pulled them out is see how bad the dust was. The 2 blades have no obvious model numbers I can see. Those have 2 of the 3 HD bays filled and 2 I/O units each on eh back side.
So how should I proceed? first blow out the dust. What are best practices for this on a server?
How to connect them to a keyboard and screen. I do not have any Mac computers. (well I have an Apple III, and a Lisa 5/10 I'm working on) I'm a PC guy. I can build a high end gaming PC with my eyes closed, and solder in new ram chips on to an Atari 800XL no problem. I know a lot, but not enough.
These units have been on a shelf in a Public Storage for several years. No apparent damage, no rodent, or insect problem. The one HD rack showing with no drives has some rust around the fans at the back.
If this is not the correct forum, could a kind soul point me to a better site?
How best to proceed?
Thanks

From the photo, it appears you have 2 G5 XSERVE rack mounts which run older Mac OS (not current Intel).
You also have 2 RAID systems.
Servers are just like a regular Mac machine - they can be configured as such....

If you don't have another Mac that has Firewire port (peer target display) connection, then you would need to connect the server to a monitor using the Mini Display port - you can get an adapter to VGA or DVI inexpensively on eBay or Amazon.

Find out if it boots and how much RAM is on board.
Run Apple Hardware test CD ( I have tons if you need) from the optical drive if it won't boot to OS.
Then if you want to run an OS, find an old PPC Mac OSX cheap but the maximum OS is 10.5 Leopard.

Based on how old these are and the limitations on running a current OS, it might not be worth much in the US. You may find a buyer outside the US but the costs to ship will be very high.

I had a rack of these older G5s a long time ago that I kept alive but now I use an Intel Quad Core XSERVE 3,1 for my office closet as a network Time Machine.....
Comment
K

Thanks very much for the reply. Very helpful. I ordered a mini Display Port to Vga. Can I use a cheap usb keyboard, and usb dell mouse on the G5's?
I looked deep into my storage and found a Mac PowerPC 7100/66 desktop and I the cables to get that connected to VGA, and an ASB keyboard and mouse. I think it is OS 8 or 9. will this be helpful?
How can I connect the RAID systems to the G5, just a ethnet cable? At least for testing. Or do they even work together?
Again much thanks
Comment
K

Update:
I was able for find enough parts around to get a KB, Mouse, monitor working. I boot to a login screen. Which is great! I know the system runs!!
Obviously I do not have those credentials. and there is nothing on the outside that give that info. There is a sticker on the the center HD that says xserve 1.1. NO way for me to see if it might have been updated past that version. Can someone tell from the login screen?
I tried things like admin, password, user, root in both fields and did not get past it. Could I reinstall whatever the latest version is over what is there and make a new login. If so, how to boot to CD first and then where can I get a ISO and key.
Also I connected the RAID box to the server with just one Ethernet cable. All the HD's show an orange LED after a breif red and blue LED when I insetred them in the bays.
Comment
K

Update 2:
Booted up blade #2, and after a long while, 8 minutes, I got to an install screen asking for xserve serial number.
So I'm stuck on both servers. Where to get serial keys legitimately?
I have the RAID powered on before I powered on the server and all the lights on the RAID turned green. I assume this is good.
But I noticed on the server there is an amber led blinking 3 times quickly and a short pause and it repeats. It is in the little triangle button. Some type of alarm I think.
Thanks for any help out there
Comment
H

Yeah....so back in the PPC days, Mac OS X Server was the last OS license that Apple sold with a serial number. Hence the prompt for a license number. These Xserves had a license in the box when new.

Technically Apple moved to a different model where the OS became free (Included with hardware purchase) and they now sell Server as an add-on package that adds services and features. But back then, they were baked into the OS.

As for licenses, where ever you can find one, I would not feel odd about using it. All this hardware is obsolete, 99% of it is long since been retired....along with all the included licenses. I used to have a Server license or two around, not sure if I can still lay hands on them.

Booting to CD is simply holding down the C key on boot, assuming you have the media.
Comment

The server keys are included with the unlimited clients OS X Server box.
If you don't have the OS X box, you can find an inexpensive 10.5 Leopard DVD client OS X on eBay for cheap.

Thanks everyone!!!
It looks like these servers are the last version Apple made. They should run OS X 10.7 Lion. I saw a youtube vid where the install process had a selection screen between the OS and a 'server'. The vid shows server installing on the same hardware I think I have. But they did not show anything about a serial/key. The DVD's I see on ebay are 'recovery/reinstall/upgrade/downgrade' version. Dose 10.7 need a serial/key?
10.5 Server sells for $50 to $200 on ebay.
Perhaps one of you very helpful people could provide a link to the cheapest correct software purchase with serial key if needed? (or download with key if needed, I can burn an iso.)
Comment

If yours is a PowerPC CPU, it will only run 10.5 maximum (natively).

Post a picture of the RAM stick detail or CPU assy # off the logic board so that I can see exactly which version you have (Power PC or Intel).

There are no keys for OS client installers - it's only for server OS with client connect licenses that require a key.

KLund1 said:
Perhaps one of you very helpful people could provide a link to the cheapest correct software purchase with serial key if needed? (or download with key if needed, I can burn an iso.)
Click to expand...

Thanks everyone!
Amazing the help you all have provided, Much appreciated! 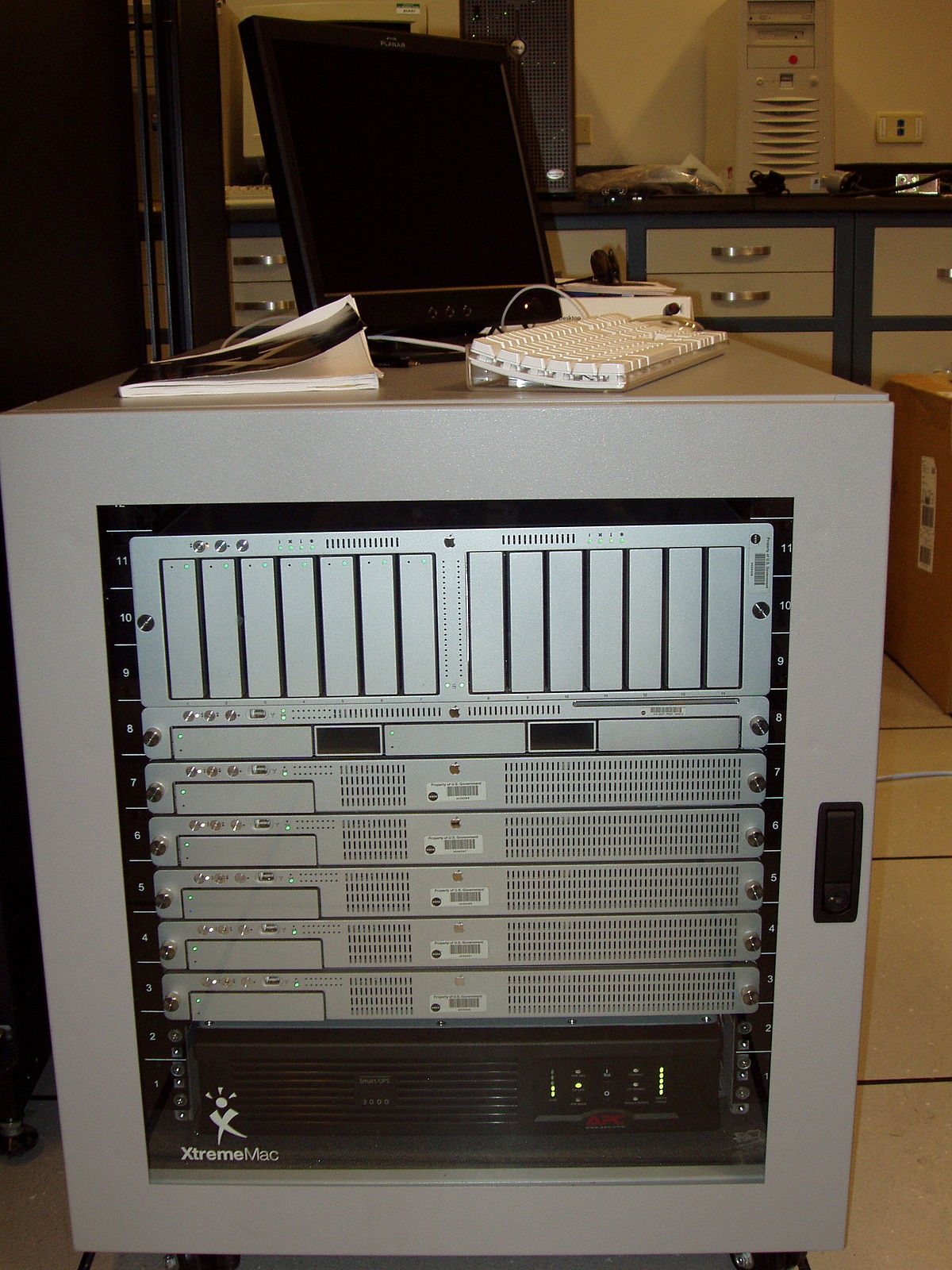 I think I have 2006 versions. Mine only have a mini-DVI video, and are stocked to PC2-5300 ram sticks.
I'll post a pic a few hours of the main board.
Comment

KLund1 said:
Thanks everyone!
Amazing the help you all have provided, Much appreciated!

I look forward to seeing the photos!

Zooming way in on the label on one of the servers, I believe I see what says "XServe3,1." (It's hard to tell, given the photo.) If so, that is the model identifier and it is most likely the XServe 2009, which was the final Xeon model.

Your photos will help identify it and we can advise from there on what software you can use to get it running.

Also, what is your goal with these? Are you going to resell them, keep them running as servers, just keep them as curiosities, etc.?
Comment

Honestly, I think the RAIDs are cooler than the Xserves. Depending on the HDD size, you might have some decent storage space there. I've struggled to get my RAID working properly.
Comment
K

I was able to get one of the Xserve's up and running. You can see what is it from one of the attached pics.
Now I would like to check the RAID units. I connected one to the server with a Ethernet cable. But i have absolutely no idea how to see it from the desktop.
Again please note, i know very little about mac os. point and click is about it. but what to click...I have no idea. I have never owned or used a mac, sorry.

Cool. According to this, you are running the OS it came with (10.4), and this model can be upgraded all the way to 10.7.5. Gives you a little more options to run less ancient tools, as it is Intel and not PPC.

Also good news....10.7 is the first OS where Apple broke the OS out from the server tools. With 10.6 and older, you needed a serial for the Server OS. For 10.7 and later, the OS is the standard free (no serial) as the desktop, and the Server features were an add-on that was a $50 purchase, with no serial as I recall.

RAID: It has been years, but as I recall, for data (to mount and access drives), you need at least one Fibre Channel cable. The ethernet is for remote management only, no data.

To configure the XRAID, you need the XRAID software, which is a separate optional install as I recall....or is it installed in the Applications/Utilities folder? Can't recall. According to this, the RAID admin tool was installed with Server....so dig around for it in Applications or Utilities.