YouTube for iOS Will Soon Be Able to Live Stream Video

Today at its VidCon keynote address, YouTube announced that its mobile app will be getting updated with a brand new live streaming option, allowing users to easily stream video from their iPhones directly from the YouTube app. 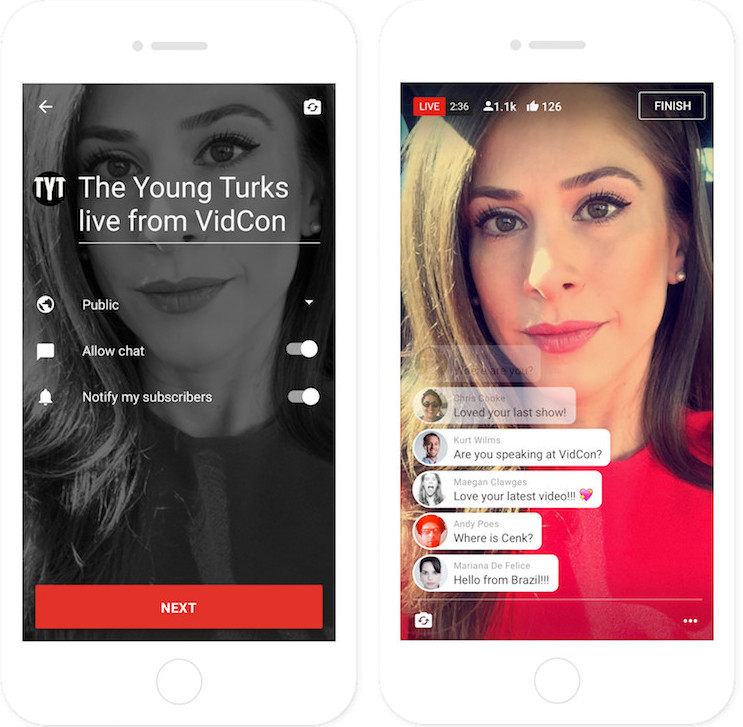 YouTube mobile live streaming will be baked right into the core YouTube mobile app. You won't need to open anything else, just hit the big red capture button right there in the corner, take or select a photo to use as a thumbnail, and you can broadcast live to your fans and chat in near real time.
Click to expand...

The feature will work similar to Facebook Live and Periscope, with streamers having the ability to see live comments from viewers. However, YouTube's live streaming will take advantage of the company's live streaming infrastructure, which it has been enhancing since its debut in 2011. Mobile live streaming has become increasingly popular since Meerkat launched in 2015, and has been used to document a variety of events, from NBA Final press conferences to the sit-in at the House of Representatives.

YouTube opened up live streaming in 2013, after two years of testing the service with big events like the Royal Wedding and Felix Baumgartner's leap from space. The video platform then began expanding it to verified accounts and creators with at least 1,000 subscribers.

Live streaming will launch today for select YouTube creators The Young Turks, AIB, Platica Polinesia, SacconeJolys, and Alex Wasabi, and will be rolling out to all users in the near future.

YouTube for iOS is available in the App Store for free. [Direct Link]

Article Link: YouTube for iOS Will Soon Be Able to Live Stream Video

If they want to keep up with the likes of Periscope, Meerkat, and Facebook Live, they'd better roll this out tomorrow.
Reactions: Seifensieder
Comment

I've yet to see one compelling reason to re-download the YouTube app.
Reactions: PowerBook-G5, Avieshek, tomnavratil and 1 other person
Comment

UStream has been doing this since around 2009. Google can't innovate anymore. They're late to the game. They're just copying others.

See? It works both ways. This will be a successful feature for Google.
Reactions: 0000111 and Avieshek
Comment

Narcissistic? Looking for new ways to be in everyone's face? Feeling a bit 'unseen' today?
Reactions: Seifensieder and jasonsmith1002
Comment
I

When you create content worth seeing, you'll have a good reason. Until then, you're not missing too much.
Comment

Thank you Google. Thanks for holding down the tech world. (I'm serious)

Disclaimer: Please don't bash me for how I feel. I'm sad today. Thanks.
Comment
L

JonneyGee said:
If they want to keep up with the likes of Periscope, Meerkat, and Facebook Live, they'd better roll this out tomorrow.
Click to expand...

They can roll this out 2 years from now and instantly become the biggest live streaming app. Youtube is basically the God of online media.
Reactions: AlliFlowers and 0000111
Comment

Long live YouTube, but why did it take that long?
Every decent app developer must recognize Apple or perish
Comment
L

Google fix this app first it's a mess
Reactions: djgamble and Seifensieder
Comment

I hope they plan to offer it to iPad users also.
Comment
0

I've also tried to stay away (even found the internal RSS feed of channels, so I didn't have to use YouTube to follow the creators I like), but the default HTML5 movie player on iPad doesn't have a quality selector. That's the sole reason I re-downloaded YT, so I could force 1080p60 or 480 when I need to.

as of iOS 9, and probably 10; I havent seen any mention of a quality selector in the iOS 10 tidbits thread.

Lukkee24 said:
But will they ever add picture-in-picture?!
Click to expand...

Preach!! I think the reason is the same as disallowing background audio, though that is available for YouTube Red subscribers, so perhaps they can do PIP as well?
Reactions: djgamble
Comment