AgileBits has released new details on 1Password 4 (via Macworld), the next major update to its popular password managing software 1Password. The forthcoming update, which follows the 1Password 4 update for iOS earlier this year, includes features such as iCloud syncing, the ability to tag items as favorites, and support for multiple accounts on a single website. New options and fields such as loyalty programs and drivers licenses are being added, and custom fields for login and data items will be supported. 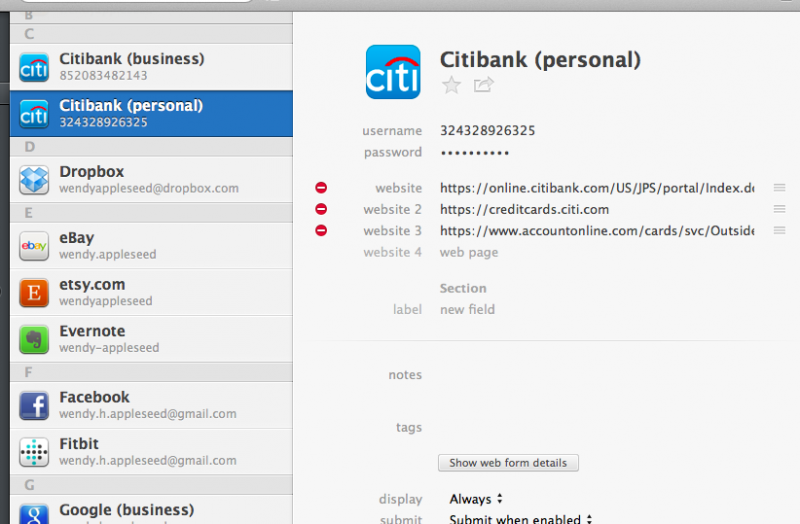 1Password 4 also includes security features such as the ability to send information from the program between iOS and Mac through encrypted iMessage and emails, the ability to see duplicate passwords and passwords strengths, and a stability overhaul with the program's browser extension being written in Cocoa to allow for unified compatibility on all major browsers. 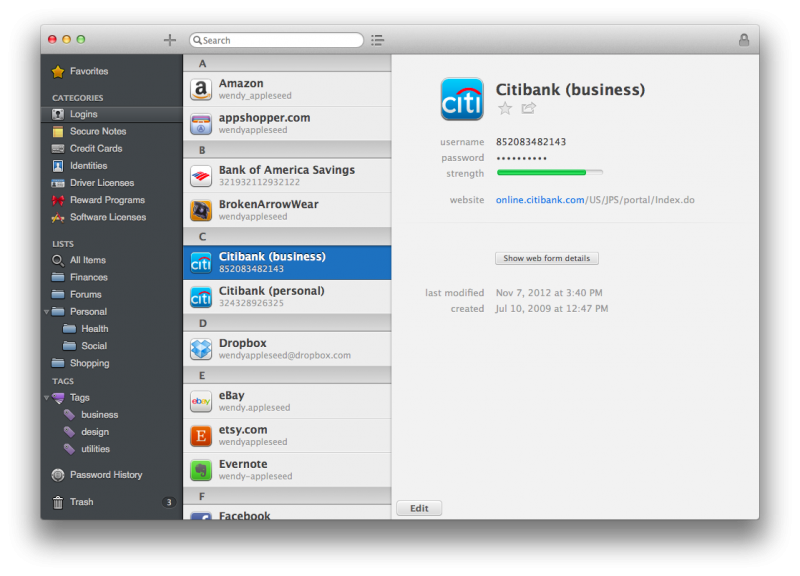 1Password 4 is expected to be released this fall, and will be free to users who have already purchased 1Password 3 from the Mac App Store. Users who bought 1Password 3 through AgileBits website on or after January 1, 2013 will also receive the upgrade for free, while pricing for new customers is yet to be determined. 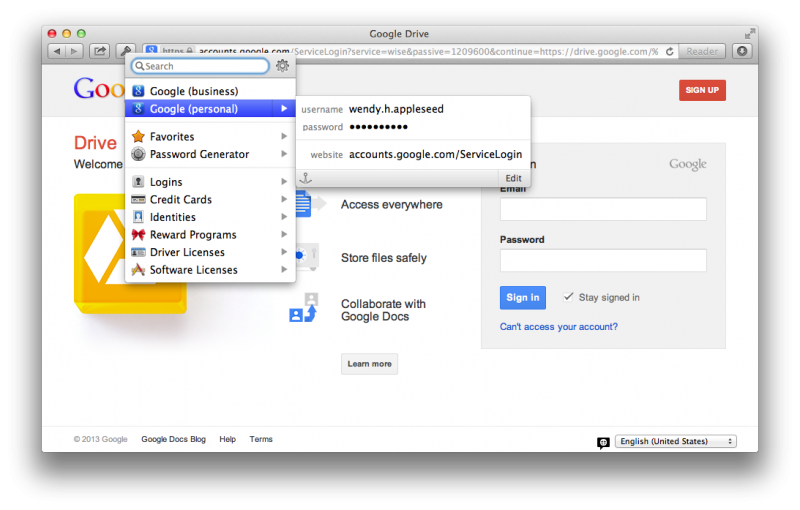 Currently, 1Password 3 for Mac can be downloaded from the Mac App Store for $49.99. [Direct Link]

Is there any major reason to buy this, over using the upcoming iCloud Keychain?

The link at the end of the article is for the iOS version. The Mac version is $49.

I think there are still a few reasons still to use 1Password.

Do you use Windows or want to view your passwords in browser on other OS's?
Do you trust Apples iCloud to keep your passwords secure (1password by default stores everything locally)?
Would you rather use Dropbox to sync?
How about storing files securely, or having a dedicated place for secure notes, other personal information, software keys etc...
You can easily backup, restore and merge the 1Password file store.
K

1Password is cross-platform, what is even more important, Apple has never been a security company so I would not believe in their expertise in making security software.
B

There are actually 3 major reasons that come to mind to use 1Password or similar programs:

I feel this update is a tad bit too late with Keychain in the Cloud.

...however, I do love 1Password's ability to generate passwords with a large array of options. For example, my Facebook password has 256 random characters and symbols. Does anyone know if Keychain in the Cloud offer such ability? I do recall during WWDC that it would help suggest passwords to use but not sure the extent of the password generating.

I will definitely be waiting to see the iPhone 5S and what Apple does with the fingerprint sensor before I consider buying this.

If Apple nails the fingerprint sensor + NFS + iCloud Keychain, I could see them hitting a crazy home run in the field of convenient security.

If they don't, I'll probably be picking this up while I wait for someone to properly combine biometrics + the cloud + NFS.

Nevermind, $68 is too much for too little. All they have from the ideal security trifecta is the cloud, which iCloud Keychain will have. The little gimicks don't make what I could get for free be worth $68 (because you need both an OSX version at $50 + an iOS version at $18.)

squirrelist said:
The link at the end of the article is for the iOS version. The Mac version is $49.
Click to expand...

Thanks for pointing that out! I've updated the post. It is indeed $49.99 for the Mac and $17.99 for iOS, but AgileBits often runs sales so people can get it at a discount.

I'm currently using LastPass which is free along with its browser extensions. 1Password looks much nicer though, where LastPass looks downright "nineties". Also, it's always awkward to get to LastPass passwords for free on the iPhone (you visit http://m.lastpass.com/ in Safari), and you need the Premium service for the app and slightly nicer integration there. This costs $1/month rather than $18 for "life" or close to it (with them giving version 4 away for version 3 users) with 1Password.

All in all, having seen this, I think 1Password might be slightly nicer to use. If not for having native apps when you're on the Mac and don't like to have to run it through a browser extension.

Edit: Whoa! $18 wasn't for the whole deal, but only iOS?! $67 for both iOS and Mac is way too expensive for what's free with LastPass, although it looks a little bit better interface-wise. Scratch this one.

About time. I've been waiting for that promised iCloud support ever since I bought this app earlier this year. Though I'm not sure how much I'll be using this app now when iCloud keychain comes out. This reminds me of the move Pandora made just recently to get ahead of iTunes Radio.

I'm glad it's going to be a free upgrade for 1Password 3 users. I bought ver 3 when it was heavily discounted during the launch of the MAS; it's regular price, as good as the app is, is quite steep IMO.

Although to be fair, if you have misgivings about the NSA perhaps iCloud Keychain should be avoided.

Woohoo, free update! Glad I bought it over a year ago. At this point we don't know how secure iCloud keychain will be, and it can't even hold your credit card security codes, much less sensitive information in any format (PDF, jpg, whatever). I was going to buy 1password 4 as I use it every day and it's a proven solution, but happy to get a free update.

Why pay for that when you get same stuff using Lastpass?

ViperDesign said:
Why pay for that when you get same stuff using Lastpass?
Click to expand...

Having used both I can say without a doubt IMO Lastpass and 1P are only the same in the sense that they generally serve a similar purpose but in terms of usability and polish they are entirely different. 1P is superb and worth paying for, but not at their full regular price. It should be priced at the most at half what they're asking for the
Mac version.

I don't know what I would do without this piece of software.
M

Thanks for voluntarily giving your passwords to NSA

Personally, I'm not paying so much for so little, but they've probably done the market research and decided that's the best price, just like I found my app generates the most profits at $2, even though sales are only ~70% of what they are when I charge $1 (at $3 it drops off to about 50% of what they are when I charge $2, so I'd make less money from charging that.)
Last edited by a moderator: Oct 6, 2013
R

A great family of apps that I rely on every day. Well worth the modest price.
R

So the desktop app is free (which is good), but I have to keep paying for iOS updates every release. Wow.

And still no proper Android app. Glad I switched to LastPass Premium.
Z

ArtOfWarfare said:
If they charged only what they needed, it would be communism ("to each what they need".) This is capitalism, they charge whatever they think will get them the most profits.
Click to expand...

No $h**. But my point isn't that they should profit the bare minimum, my point is about the extent to which they are capitalising. Even from their own point of view it doesn't work. Presumably like quite a few people I was tempted by their iPhone/iPad app, but then saw that if I wanted a whole password ecosystem (you know, one password), it'd cost $17.99 for the Mac version with was a deal breaker for me. So I didn't bother even with their more reasonable iOS version.

Sorry, you can do all the market research you want but at such a price you're locking out eager customers from the whole ecosystem.

I even bought Tweetbot for Mac (while drunk) because it's so good in its design and offers so much, and at least they had the explanation that Twitter were being dicks with their new token limits for new apps.
Last edited: Aug 24, 2013
You must log in or register to reply here.
Share:
Facebook Twitter Reddit Email Share Link
Register on MacRumors! This sidebar will go away, and you'll see fewer ads.
Sign Up
Top Bottom