In the wake of today's release of new iMacs, a number of tidbits about the new models have been surfacing.

iMac comes with a wireless keyboard and either a Magic Mouse or a Magic Trackpad - your choice. With Magic Mouse, you get a mouse unlike any other. Its smooth, seamless design lets you control everything with simple gestures. But if you're all gestures all the time, then opt for Magic Trackpad. Its touch-friendly all-glass surface gives you plenty of room to scroll, swipe, pinch, and rotate to your fingers' content. When you purchase your new iMac from the Apple Online Store, you have the option to replace the included Magic Mouse with the Magic Trackpad at no extra cost.
Click to expand...

Customers can of course still add the Magic Trackpad for $69 if they wish to have both input devices.

- 27-Inch Model as External Display: Since 2009, the 27-inch iMac has supported use of the machine as a secondary display via the Mini DisplayPort connector. Called "Target Display Mode", the feature allows users significant flexibility in using the machine either on its own or to provide extra screen real estate for other machines when needed.

While we were unable to find explicit mention of support for Target Display Mode on the new iMac product pages, an Apple sales representative has confirmed to us that the new 27-inch models do continue to support the feature through the new Thunderbolt ports. 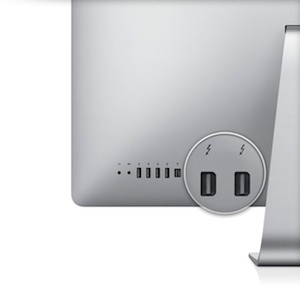 - Dual External Display Support: Beyond continued support for display input, GigaOM reports that the presence of two Thunderbolt ports on the new 27-inch iMac will allow the machine to drive two external displays for a total of three screens.

One of the most exciting things about today's new iMacs (and the thing that will probably result in me buying one) are the dual Thunderbolt ports on the 27-inch iMac. They're great in that they provide a lot of potential I/O transfer power, but more importantly because it allows the new iMac to output to two external monitors simultaneously, Apple confirmed to me this morning.
Click to expand...

Boot Camp is Apple's utility for allowing users to natively run versions of Microsoft Windows on their Macs.

Dual ports should have been on the notebooks as well.

Sweet...wish there were two Thunderbolt ports on the 21.5-inch as well.

Does anything use Thunderbolt yet? Will anything ever?

what about target display mode on the 21/24" models?

wow thats pretty cool with the option of the trackpad. I think its a must on any iMac. I couldn't live without it.

It's still cheaper to buy the Trackpad separately by buying the iMac anywhere else besides the Apple Store, since the Apple Store doesn't discount while charging state taxes.
F

So is it safe to assume that with 2 external monitors one can have a 3-monitor eyefinity-like extended desktop?

And would the same setup work in bootcamp (ie using eyefinity)?


BTW, Canadian prices are the same as US! Never thought I'd see the day.
R

I'm curious about this as well. Can you use the target display mode on the 21.5" model?
H

Who has room for two external displays on a desk that already has a 27" iMac?! Dual outs on the MBP would make much more sense, although achieving it may be more of a technical challenge in terms of GPU power.

ETA: Of course, having an external display connected directly and using the other ThunderBolt port for non-display ThunderBolt devices makes much sense, especially seeing as ThunderBolt devices can't be daisy-chained after a display. So I'm not saying the two ports don't make sense.
Last edited: May 3, 2011

Now I want my mini with 4 thunderbolt ports and quad core. Bring on the new SB Mini

Those iMacs are so nice looking tho!

So when is the ACD gonna support thunderbolt?

So hope that target display mode stays. Wish there was something more concrete that a sales reps word.
F

homsar said:
Who has room for two external displays on a desk that already has a 27" iMac?! Dual outs on the MBP would make much more sense, although achieving it may be more of a technical challenge in terms of GPU power.
Click to expand...

Time for a break out box!

Which goes against the stark minimalism Apple was going for. Wait, what?

roadbloc said:
Does anything use Thunderbolt yet? Will anything ever?
Click to expand...

And I have no trouble imagining why that would be interesting, haha.
S

So, with TB moving across the whole line, how long before we can buy a (Data | Display) splitter for TB so that people using the new systems can use external displays and the data connection at the same time without the PITA of daily chaining? Hope before I buy a new system :/

You'll need to wait for Ivy Bridge for USB3, that's when Intel is incorporating it into their chip sets. Did you really expect USB3 with this update? It's not like Apple has been incorporating non-Intel USB3 controllers in any other updated systems... We'll get it when Intel makes Apple get it, and not a moment before :-(
P

multi display on one TB connector?

Isn't a single TB bus capable of driving more than one display.... so can you drive two displays from a single port?

Just noticed they give an option for both Serial ATA and SSD together (both internal...I think). That would be a great option if it weren't +$600
P

I bought my 1st iMAC 27" last year and I'm extremely happy with it!
I have no need for a second monitor since it's so wide.
So besides the dual external display on the 2011 what else...?
Are we missing anything else from the reported update notes???
Thunderbolt seems cool, but my iMAC is pretty fast as is. I guess I was wondering if the new update was going to make me jealous...NOT.
Maybe next refresh,,,

Wow, the dual screen output is what could some day push me over the edge. A 27" display + 2 27" Apple screens either side sounds pretty nice. Still not enough to make me part with my 30" ACD right now though.
You must log in or register to reply here.
Share:
Facebook Twitter Reddit Email Share Link
Register on MacRumors! This sidebar will go away, and you'll see fewer ads.
Sign Up
Top Bottom