A forum thread [Google translation] posted to Chinese site WeiPhone.com earlier this month claims that Apple is planning to introduce its next iMac at a press conference either this month or next month, with the new iMac offering a redesigned body with a thinner profile. The report includes a photo of what is said to be the logic board and other internal components of the new iMac. 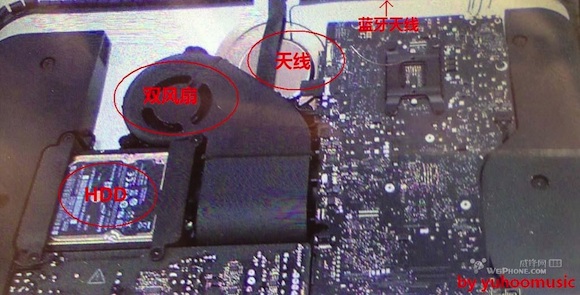 ​
Click for larger​
The authenticity of the photo can not be confirmed, but iFixit's Kyle Wiens tells us that it does appear to be plausible based on some similarities to current iMac components. One example is the silver disc located behind the main layer of components. This disc has been found in Apple's iMac models over the past several years, and it houses the Wi-Fi antenna directly behind the Apple logo on the rear of the iMac's body. The Apple logo is the only plastic portion of the iMac's otherwise aluminum rear shell, thus providing the best location for optimizing signal reception.

Other items of interest pointed out in the photo include the Bluetooth antenna (top edge), fans, and hard drive.

The redesigned iMac is said to be considerably thinner than the current form factor, with the machine's thickness almost impossible to gauge when viewed from the side. The curved rear shell is also said to appear more like a water droplet than the squared-off design seen in the current model.

The report also claims that the new iMac's screen is glued to the front glass of the machine, in line with previous rumors stating that Apple is moving to fully laminate the two components together for improved display quality.

Also in line with previous rumors, the report suggests that Apple may first update the 21.5-inch model with the new design, which is said to maintain the existing "chin" below the display even as the body is tweaked with a thinner profile. The updated 27-inch model could then follow somewhat later, as has been suggested due to the challenges of laminating the larger display and glass with acceptable yields. The new iMacs are also said to be more expensive than the current models, but it is unclear how significant any pricing changes would be.

Finally, the report claims that Apple is indeed working toward a release of a 13-inch Retina MacBook Pro. The notebook is said to already be in assembly in "Mexico and other places", with Chinese production coming later this month. The new 13-inch model is said to carry a code name of "D1", which fits with the "D2" code name that turned out to be the 15-inch Retina MacBook Pro.

The report also seems to suggest that Apple will be tweaking the 15-inch model to address a few technical issues such as heat dissipation, but these changes will apparently be made behind the scenes and not be presented to consumers as an updated model.

Apple is reportedly set to hold a media event on October 23 to introduce the iPad mini, but it has been unclear if the company plans to introduce its new Mac products at the same event. If Apple does decide that its updated Macs are significant enough to warrant a presentation for the media, it will likely show them at the iPad mini event rather than trying to squeeze in yet another separate event.

What about the Mac Mini? It's overdue for an Ivy Bridge update.

Interesting. If the chin is kept it still likely we can still update RAM. I do hope the 27inch is released at the same time as the 21inch!
A

Finally some news!
I

Can't work out if this good news or not. I wanted the 27inch model!

Oopoohhh Lord, finally some light at the end of the tunnel, Rejoice !
S

ipodmac said:
Can't work out if this good news or not. I wanted the 27inch model!
Click to expand...

Even if they release the 27 later, you'll know WHEN it's gonna happen.

A news article about an Apple Desktop Computer.

Can you believe it?

I really need to change my Mac but was waiting until the end of year to see if some newer models would come to market.

Finally we have a slight nibble of a rumour! My 2010 iMac is still going strong, but always good to know desktops haven't been forgotten about!
L

thinner body or not, the iMac suffers 2 majors issues that need to be solved:

Woohoo!!!! Even though I dont have the cash to buy a new one!!!!!!!! Thinner isnt always better and with something as large as an iMac i dont think its necessary. Apple should really concentrate on delivering a desktop GPU to its customers instead of the mobile chips it uses in its 'desktops' Now that the MacPro has been pretty much abandoned by Apple then maybe an iMac Pro will have a nice ring to it but only if it delivers on the power that a power using professional requires.
D

Looks like a laptop hard drive. Which would allow for a much thinner body, but at the expense of a smaller drive capacity.
T

macchiato2009 said:
thinner body or not, the iMac suffers 2 majors issues that need to be solved:


so i hope that this is not simply a new aesthetic redesign but also a functional redesign
Click to expand...

I really can't see how being thinner will avoid making the first issue worse.

And given the compromises Apple seem to have been willing to make just to make the iPhone 5 thinner when nobody wanted that either, that scares me.

Nice - glad to see some good news. Its getting to the point though that they (the iMacs) need to be available soon to make the Christmas season.
K

I really want it to look like this one

But why the hell would they make them more expensive???
8

Where are our new Mac Pros?

I hope it is more expensive for a good reason. I have been waiting for the iMac and holding off a PC for ages and to get a rumor that the price is going to hike makes me feel sick for waiting this long for the iMac.
You must log in or register to reply here.
Share:
Facebook Twitter Reddit Email Link
Register on MacRumors! This sidebar will go away, and you'll see fewer ads.
Sign Up
Top Bottom