The upcoming iPhone 6 has been incorporated into a new concept video by designer Sam Beckett, which was initially posted to The Verge forums. According to the dimensions Beckett provides, his "iPhone Air" concept includes a 4.7-inch display, a 1920 by 1080 resolution and 468 pixels per inch.

Beckett's concept is 8 percent larger than the iPhone 5s and 9 percent thinner. The slimmer profile is in line with previous iPhone 6 rumors, which have suggested Apple has improved its backlighting technology to allow for thinner devices.

The phone is only 8% larger than the existing iPhone 5S, this increase is to accommodate the larger screen. Some extra space could be potentially utilised by reducing the width of the side bezels and by also slimming down the top and bottom of the phone frame too. The depth of the iPhone Air is 7mm, coming in 0.6mm smaller than it's predecessor. This modest reduction in the device depth and larger increase in the width and height could help create a bigger space for the battery and other components.
Click to expand...

Like several other iPhone 6 concepts, Beckett's design keeps the same general size and shape of the existing iPhone 5s while doing away with thick side bezels. The design incorporates thinner side bezels with a sapphire crystal display, both features the phone is rumored to include.

Beckett also draws on a number of other rumors for the video, suggesting the iPhone 6 will include a 10-megapixel sensor with an aperture of f/1.8 and a faster A8 chip, which is reportedly already in production with TSMC.

As with any concept, it is unclear if these ideas and rumors will make it into the next-generation iPhone, but the video does imagine how a larger iPhone could possibly look. Apple is said to be developing two larger iPhones for release in 2014, one near 4.7 inches and one quite a bit larger at approximately 5.5 inches.

This could very well be it... I like it.

or i guess all Sapphire crystal back?

Can't be 9% thinner with a headphone jack. Unless they're going to require an adapter. Use your brain McFly.

I like the video and the look of the phone.
W

Nice concept, but I want a curved back in the form of the the iPad Air, or something completely "different".

hobbbz said:
Can't be 9% thinner with a headphone jack. Unless they're going to require an adapter. Use your brain McFly.
Click to expand...

The iPod touch has a thickness of 6.1mm and has no problem accommodating a 3.5mm headphone jack.
S

Why do people waste their time on these concepts and mock ups? They don't give us any real insight into Apple's plans and are always only skin deep. The worst are the software mock ups - it's easy to design a clean-looking interface in photoshop, but they rarely take into consideration all the usability concerns of actual software. The whole thing is a very odd type of fan fiction.

Come out with a 5.5 inch and Apple wins me back.
D

Ya'll who are hoping for a major departure from the iPhone 5S design are in for a disappointment. Yes it will be a new design, but the iPhone at this point is a mature product. Not sure what kind of of mind boggling design upgrade everyone is looking for.

Thinner, lighter, edge to edge screen and i'll be happy.

I like the silent/vibration slider switch. But I would like to see a flat back that curves pebble like to smooth rounded edges like the Galaxy phones. Not a big fan of the sharper edge sides of the iPhone 5 series.
G

I really like this. The best concept so far in my opinion. 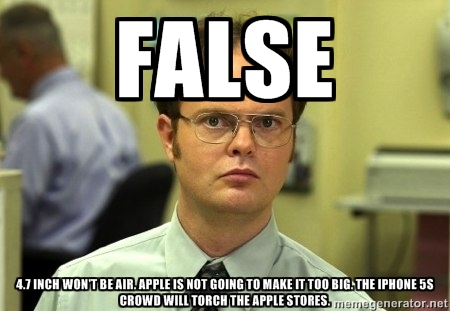 I just ballparked it but I think this is a good representation of how the current 5s compares to the envisioned 6. 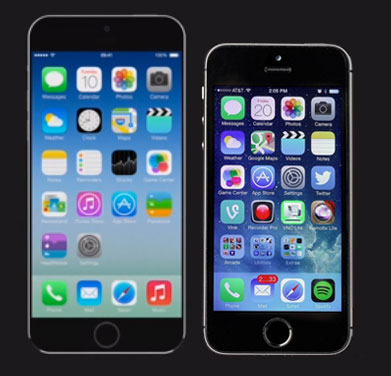 Personally still hoping for a 4.3-4.5in model with the same width just a reduced bezel.

johncarync said:
I just ballparked it but I think this is a good representation of how the current 5s compares to the envisioned 6.

Maybe it's just me, or zero bezels on sides only make the Phones look weird, and they also don't let you use some phone cases, like silicone ones from Amzer.
G

Looks nice. Im really not a fan of the iPhone Air naming concept, however.

Too thin for headphones and camera

Without any frame of reference it doesn't look that much different in size.

If they increase the size of the screen, they'll have more space for battery (and can spread the battery out thinner), so I think it's pretty obvious the next redesign will be thinner. Especially if they're using thinner screens and screens the require less power (less power = less battery). Requiring less power could reduce weight also.

Here's my question: when is too thin that it starts to impact the camera (and the headphone jack)?

Personally, I don't need it thinner or lighter. I'd rather have it thicker with a better camera and a longer lasting battery.

Or make it tapered like the MacBook Air, thicker at the end with the camera and the external interfaces and thinner at the other end. This will also satisfy the people who seem to want the form to change just so that it's different than it currently is (and then need newer, more costly cases and accessories).

SethBoy said:
The iPod touch has a thickness of 6.1mm and has no problem accommodating a 3.5mm headphone jack.
Click to expand...

Yes but the iPod Touch does not have the same bezel as the iPhone or this rendering.