70+ New Emoji Characters to Be Included in Upcoming iOS 12.1 Update

Apple today announced that the iOS 12.1 update, which is currently being beta tested by developers and public beta testers, will include the new Unicode 11 emoji.

Apple first promised new emoji were coming on World Emoji Day back in July, but the new characters were not included in the original iOS 12 update. 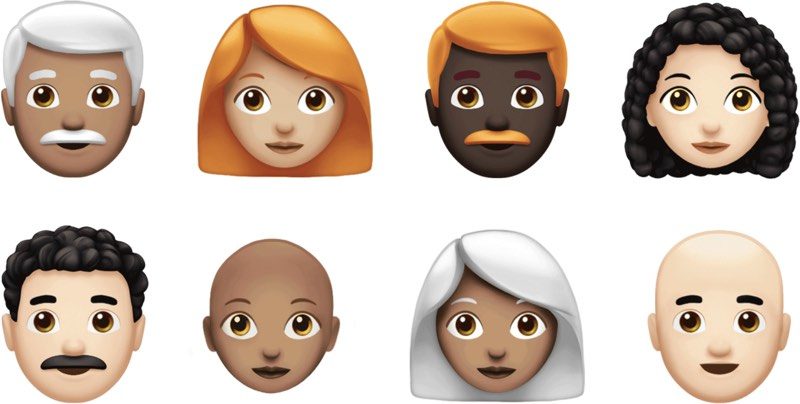 Apple plans to introduce more than 70 new emoji characters, with options for red hair, gray hair, curly hair, and no hair, along with smiley faces that include cold face, party face, pleading face, and face with hearts.

Super heroes, an eye-shaped nazar amulet, and an infinity symbol will be added, along with new animals such as kangaroo, peacock, parrot, and lobster. New food items include mango, lettuce, cupcake, and moon cake, with a full list of new Unicode 11 emoji available from Emojipedia.

Apple says that it is working with the Unicode Consortium to add additional disability-themed emoji to Unicode 12, which is set to be released in 2019.

Developers can get the new emoji right now by downloading the iOS 12.1 update, and Apple says the software will also be available for public beta testers later in the day.

I really don’t need new emojis. I want my battery life back. Simple.
Reactions: amegicfox, merkinmuffley, Substance90 and 13 others

Apple is very clever: they always wait until the .1 release to include the new emoji, they know that will get people to update.
Reactions: FairlyKors, Solomani, Nicky G and 1 other person

This is the best emoji update yet! Look at all the fun and relevant images we've been clamoring for. People ask and  delivers.
Reactions: Solomani and Delgibbons
E

I'm glad such a ground breaking new feature requires its own press release.
Reactions: FairlyKors, Substance90, outsidethebox and 17 others

The mango one reminds me I better cut up and serve the mangos in the fridge before they go bad. It looks pretty good.

I enjoy using emoji now and again but there are so many emojis now it’s just easier to type out a word than try to insert the emoji even when it pops up as you’re typing.

My favorite ones are the ones for this forum: For me, those say it all. Oh and this one...
Reactions: Dydegu and Wayfarer

Run out of ideas? There’s always the adding the extra Emojis trick!
Reactions: bruno7, Rojaaemon, Kris28 and 1 other person

None of that matters. Emojis do.
Reactions: FairlyKors, Substance90, outsidethebox and 8 others
T

Do you have any idea how long I’ve waited for a lobster emoji?
Reactions: tubular, adamdport, Ulenspiegel and 13 others
L

Hey guys, can you believe some people think Apple can only either fix bugs OR make new emojis?? Scary, I know, but some people just can't think logically.
Reactions: wyarp, Stargher, Borin and 10 others

They aren't ignoring anything. You realize multiple people can work on multiple parts of iOS at the same time, right? If this some mind blowing possibility people just can't comprehend?
Reactions: ErikGrim, deadoctopi, Stargher and 6 others

How do I get off this beta train?

I removed the beta profile and turned off automatic updates on my iPhone X, which I only ever installed the iOS 12 GM on. When I upgraded to the iPhone XS I used the backup from my X, and a few days later it said I had to upgrade to iOS 12.1. The only options it gave me were to install now or install tonight. When I tried to go around it, or not agree to the terms of service, it would pop back up asking me to install it again. I confirmed that my iPhone XS has no beta profiles installed, and no automatic updates enabled, and yet it somehow downloaded and installed the iOS 12.1 beta. I don't understand what is happening.

linkmaster02 said:
Hey guys, can you believe some people think Apple can only either fix bugs OR make new emojis?? Scary, I know, but some people just can't think logically.
Click to expand...

Again this ****
Reactions: Morgenland, simonmet, ersan191 and 1 other person
P

There are far too many face emojis. Wouldn't it be easier to just have one emoji and a popup RGB window to select the exact shade you want?
Reactions: FairlyKors, bruno7, harriska2 and 2 others
You must log in or register to reply here.
Share:
Facebook Twitter Reddit Email Link
Register on MacRumors! This sidebar will go away, and you'll see fewer ads.
Sign Up
Top Bottom