At last Wednesday's media event, Apple introduced two new processors - the A10 Fusion for iPhone 7 and 7 Plus and the S2 for Apple Watch Series 2. Although Apple only briefly covered the S2 during the presentation, it did spend a good deal of time talking about A10 Fusion. The 'Fusion' suffix refers to the heterogeneous architecture that the A10 features, which has two high-power, high-throughput cores and two much smaller cores that are more power efficient.

Apple also introduced another very important piece of standalone silicon in its new AirPods, dubbed the W1 chip. In total, this represents a great deal of engineering work done by Apple over the last year, and the A10 is the most significant to Apple's system-on-a-chip (SoC) line since the company's transition to 64-bit. 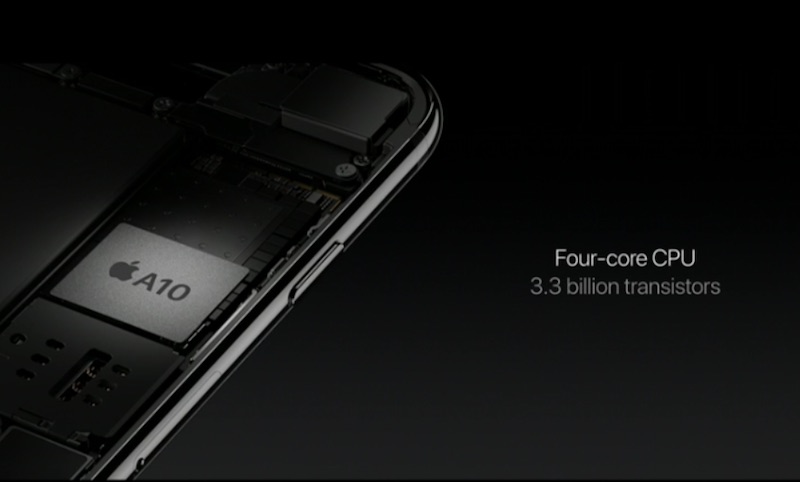 Apple unveiled the biggest technical changes featured in the A10 at the very beginning, boasting a four-core CPU with 3.3 billion transistors. While Apple never disclosed a transistor count for the A9, it very likely fell somewhere in the middle between the 2 billion count on the A8 and the 3.3 billion of the new A10. A transistor count well under 3 billion seems probable for the A9; otherwise it would have been worth boasting about on its own.

The 3.3 billion number for the A10 is well over 50 percent larger than the A8, and the large jump is likely mostly thanks to the addition of two new, albeit small, CPU cores along with a greatly enhanced image signal processor (ISP). Apple also disclosed that the GPU remains a six-cluster design, while benchmarks suggest that the L1 and L2 cache sizes remain unchanged.

Oh boy I feel sorry for those Android manufacturers that will have to catch up with that beast, that won't happen in the next year that's for sure.
Reactions: Wowereit, TimSHB, ex0dus1985 and 30 others

Can't wait to see what this bad boy can do.

Edit: I'd be interested to see apple really open one of these puppies up and unleash it's full potential on the world. Sure battery life and heat would be an issue, but one of these in a low cost Mac Mini would be awesome. Better yet, it is crazy to think that we are truly approaching desktop class CPU's in a device that fits in my palm and pocket.
Last edited: Sep 12, 2016
Reactions: Kettil, BvizioN, geenosr and 10 others

Because you're agenda-driven?
Reactions: mytawalbeh, Keane16, haruhiko and 21 others
M

Apple keep upping their game when it comes to chip architecture. We all thought the A9 chip was powerful. They're simply strolling along while others are sprinting to catch up. It looks like they'll never be caught.
Reactions: Wowereit, BvizioN, Apple4everr and 5 others

Pulled the trigger on my first Apple Watch. The series 2 was impressive. Actually more excited about this than I thought I would be.
Reactions: mytawalbeh, Wondercow, Sasparilla and 4 others

Apple's CPUs have been pounding the competition pretty hard and didn't even buy them dinner afterwards. This CPU just hammers the nail in the coffin.

I'm amazed they got 25% extra from one generation, in a non-S series model. Historically the jump between shells (3GS to 4, 5S to 6), hasn't offered anywhere close to this sort of improvement.
Reactions: ex0dus1985, haruhiko, MareLuce and 11 others

I was kinda wondering when Apple would finally get around to adopting something like big.LITTLE

The power savings are impressive!
Reactions: Apple4everr, iAbc21, Glideslope and 3 others
B

Someone256 said:
Oh boy I feel sorry for those Android manufacturers that will have to catch up with that beast, that won't happen in the next year that's for sure.
Click to expand...

no someone didn't, because that point is irrelevant.
Reactions: TimSHB, ikir and foxkoneko
L

Also MR, this was a damn fine and interesting article to read. Excellent job!
Reactions: Lebanese, page404, Mighuel and 31 others

Na-na, na-na, do-do, Apple is great and Android is poo-poo.

Slowly, but surely, burying the competition into oblivion.
Reactions: 1041958, iAbc21, nagromme and 3 others

It truly is amazing what Apple's chip engineers have been doing with these processors.
Reactions: Kettil, mytawalbeh, ex0dus1985 and 13 others

And for the Series 1 as well, no?
Reactions: nagromme
M

The 7Plus supposedly has 3GB of RAM.

keysofanxiety said:
Also MR, this was a damn fine and interesting article to read. Excellent job!
Click to expand...

Indeed, lots of things to learn!
Reactions: ikir, keysofanxiety and username:
U

This is a pretty well written article! I almost feel like I understood some of it!

Some new phrases for the water cooler!
"So have you heard about the dynamic voltage and frequency scaling in the new iPhone? Yeah it's off the charts"

MacRumors said:
By all indications, the first-generation Apple Watch features a Cortex-A7 CPU design. Apple does, however, seem to like keeping the SoC simple when introducing a new device, as when the original iPad simply included a faster clocked A4 from the iPhone 4. The Apple Watch comparison is interesting though, because Series 2 was merely increased to a dual-core design up to 50 percent faster than the original.
Click to expand...

Great write up. It should be noted that the A4 was actually introduced with the iPad and later brought over to the iPhone 4 and not the other way around.

With Apple only claiming a 50% CPU speedup for the S2 vs the S1, I wonder if that means single core performance has actually regressed vs the S1 perhaps in favour of power savings? Given Apple's usual emphasis on single core performance that would be strange, so perhaps they're just being conservative in their performance claims, especially since the watch wouldn't be expected to sustain peak performance for long.
Reactions: ex0dus1985, Gudi and aplnub
You must log in or register to reply here.
Share:
Facebook Twitter Reddit Email Share Link
Register on MacRumors! This sidebar will go away, and you'll see fewer ads.
Sign Up
Top Bottom