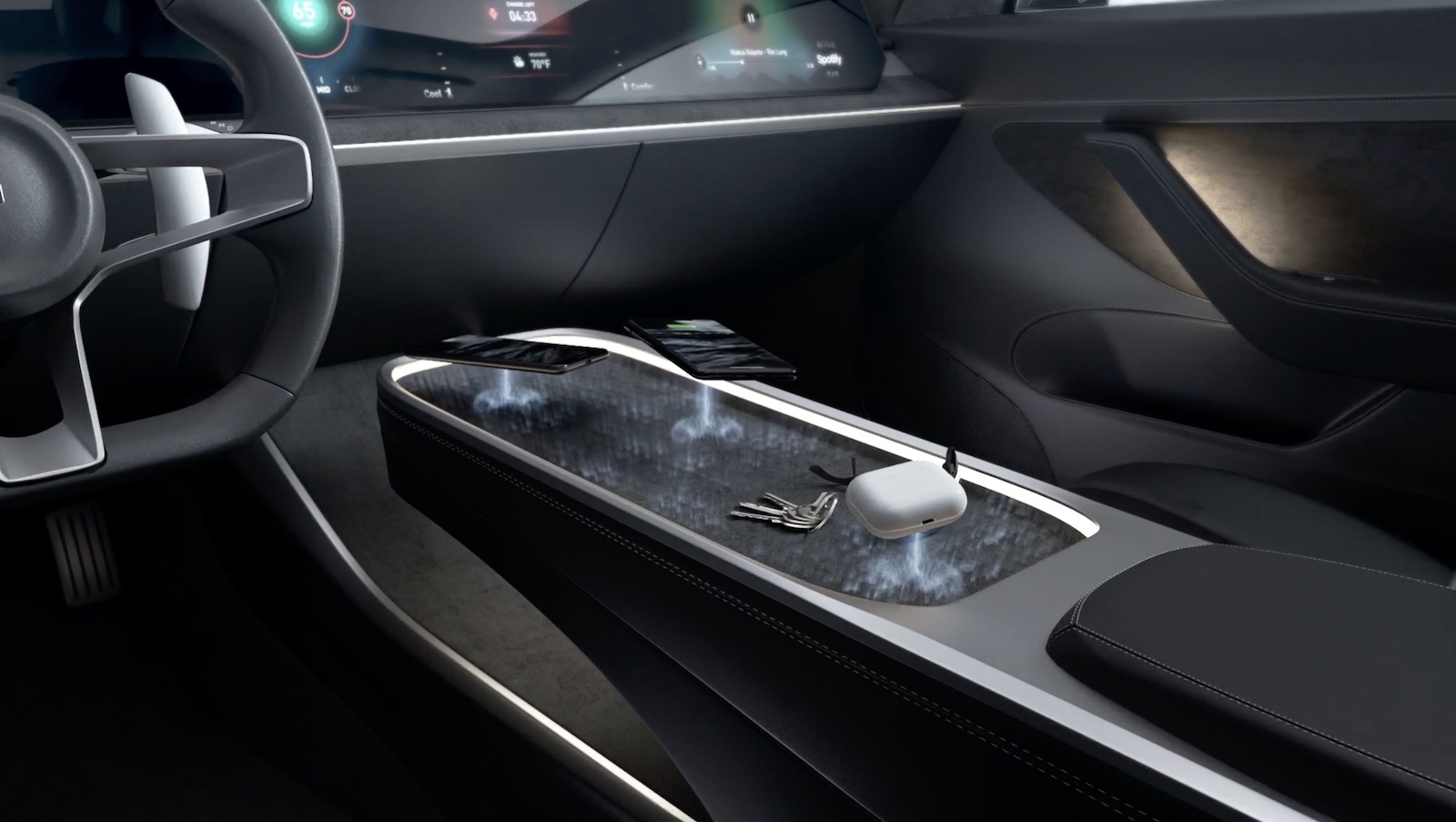 Unlike traditional wireless charging mats, which require devices to be precisely aligned in order to charge, FreePower allows for full surface charging from corner to corner. The proprietary technology can accommodate different surface sizes and any number of Qi-enabled devices, including the latest iPhones and AirPods with a wireless charging case. One exception is the Apple Watch, which does not work with standard Qi chargers.

Aira envisions a vehicle with a large wireless charging surface spanning the center console, on which Qi-enabled devices could be placed to charge, with total freedom of movement. The exact implementation would likely be up to automakers, as some might want to incorporate cupholders and other features alongside the charging surface.

In September, accessory maker Nomad released the Base Station Pro wireless charging mat as the first product with FreePower integration. Priced at $199.95, the Base Station Pro has 18 charging coils that allow for three Qi-enabled devices to be charged at once, regardless of their position on the mat. This solution is similar to what Apple aimed to achieve with its canceled AirPower mat, although it lacks support for the Apple Watch.

No timeframe was offered for when we might see the first vehicles with support for FreePower. Aira also wants to expand the technology to furniture like desks and nightstands, as well as restaurants, airports, hotels, and more.

Seems like a waste of space.
Reactions: imola.zhp, aloyouis, sdz and 4 others

That is a remarkably bad photoshop job.
Reactions: aloyouis, Nails1, notabadname and 7 others
A

I also love my expensive objects becoming projectiles in a car accident.
Reactions: imola.zhp, aloyouis, Sharkoneau and 27 others
B

"...with total freedom of movement". That's the problem.
Reactions: imola.zhp, Sharkoneau, MacMan988 and 12 others
R

Do we buy the charger separate so we can get “full speed” charging and save the environment? ?
Reactions: sharleyP and Huck

freedom of movement: as in "stuff moves around freely on every sudden velocity change or sharp turns."
Reactions: luvitruff, Lazy, TropN and 8 others
M

That sounds like a recipe for disaster in case of an accident or emergency braking....
Reactions: TropN, alexandr, LeadingHeat and 4 others

I actually like this idea. Aftermarket would be a problem, but new vehicles would benefit from it. There obviously would be a need to somehow secure the phone so it doesn't bounce all over. But it would sure beat having to plug it in.

Ah yeah, an iPhone screen that costs $200 to replace is definitely my priority every time I get into a collision while I’m driving
Reactions: bparzonz, Acidsplat, Huck and 1 other person
A

Hopefully they have something to keep the device stuck in the car, ensuring your car has a bunch of devices flying around in an accident is a bit dangerous.
Reactions: LeadingHeat

SoN1NjA said:
Ah yeah, an iPhone screen that costs $200 to replace is definitely my priority every time I get into a collision while I’m driving
Click to expand...

You don’t need to be involved in an accident for loose objects to be projected. An hard braking is enough. And whilst during an accident whether your phone went flying somewhere or your AirPods got stuck somewhere is the least of your worries, I’m sure most people wouldn’t be happy if their AirPods or iPhone went flying around the cabin just because they had to brake hard.
Not to mention that if you’re unfortunate, an AirPods case or other small object could fly around and get stuck under the brake pedal and possibly cause an accident.
Last edited: Dec 11, 2020
E

Forget accidents, I don’t want my phone clanking around on a big pad with other objects when I turn a corner. Really don’t see the use case here.
Reactions: jimthing, Huck and The Barron
N

I've got a half-eaten Big Mac on the dash of my pickup that hasn't moved for months.
I suspect the surface will rubberized so things won't just slide around.
Reactions: TropN, sideshowuniqueuser, LeadingHeat and 4 others
R

That's great, but how many cars have a flat space in the center console like that that would allow a mat to be incorporated into the design? My car has numerous dials and controls in the area, not to mention the cup holders. I'd be interested to see how this could be implemented.

Along with being a HUGE waste of space, it will also let you know how dusty the interior is and that you need to revert to 100% OCD mode & clean it every time you want to drive somewhere. Ooof

I like the idea. The bunch of keys create an electromagnetic short circuit, and after the next turn, the AirPods are also gone. And always neat electro smog.

If you can't invent anything, you have to bring nonsense into the world.
Reactions: The Barron

jayducharme said:
I actually like this idea. Aftermarket would be a problem, but new vehicles would benefit from it. There obviously would be a need to somehow secure the phone so it doesn't bounce all over. But it would sure beat having to plug it in.
Click to expand...

Aftermarket? No problem, sir. We can have that ready for you in one day and for only $1425. ?
Reactions: jayducharme and Morgenland

NMBob said:
I've got a half-eaten Big Mac on the dash of my pickup that hasn't moved for months.
I suspect the surface will rubberized so things won't just slide around.
Click to expand...

No one will want to clean your rubberized dash
Reactions: Nails1 and NMBob

Why have one distraction fully charged....when you can have three!!!
Reactions: LeadingHeat
R

Wireless charging for me would be to charge my phone while it is in my pocket. Without the need to have any kind of physical contact with the charger
Reactions: LeadingHeat

I believe this is twice in as many days I've looked at an invention and thought to myself "…that's just a bad idea."
Reactions: aloyouis, Analog Kid, sideshowuniqueuser and 2 others
You must log in or register to reply here.
Share:
Facebook Twitter Reddit Email Share Link
Register on MacRumors! This sidebar will go away, and you'll see fewer ads.
Sign Up
Top Bottom