Following the leak of an alleged iPhone 6 front panel earlier this week, the iPad is now getting its turn with a pair of photos showing what is said to be a front panel for the next-generation iPad Air, shared by Dutch site One More Thing [Google Translate]. Notably, the part appears to include an integrated display in contrast to the separate panel and display parts used on the current model. A move to an integrated front panel/display would reduce overall thickness, potentially allowing Apple to further slim down the iPad Air or make room for other components such as a slightly larger battery. 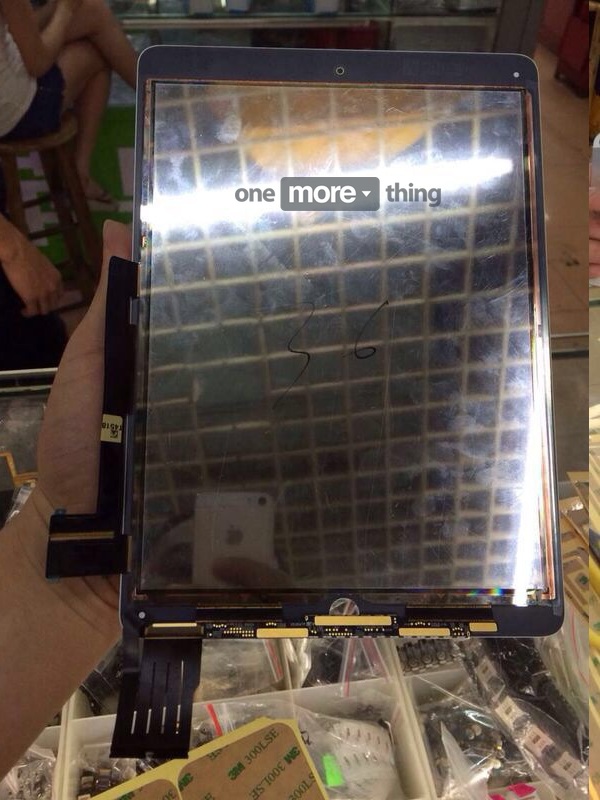 MacRumors spoke with iFixit co-founder Kyle Wiens, who noted that the assembly could indeed be legitimate and use a manufacturing process similar to that seen on the Retina MacBook Pro. The move to an integrated panel/display would increase repair costs, but ease of repair has not been a particularly major focus for Apple and the company already uses an integrated display on the iPhone. 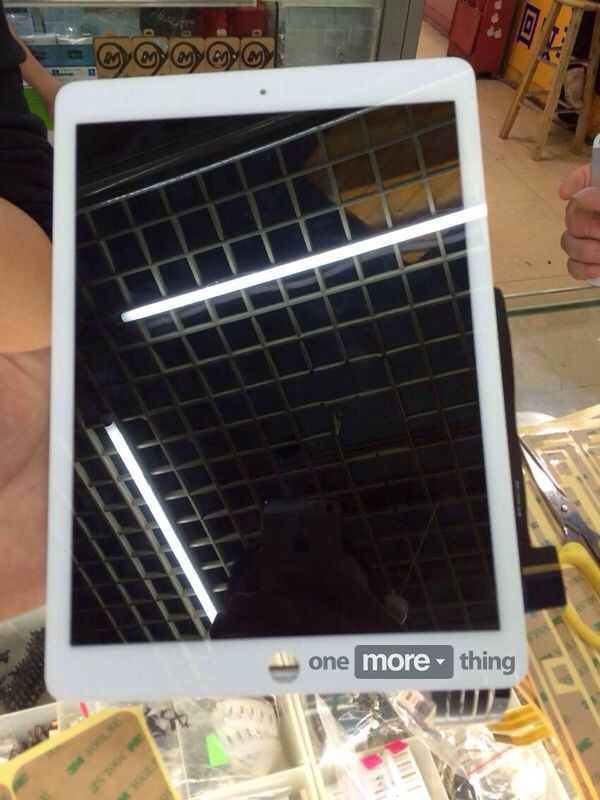 The next-generation iPad Air is expected to launch later this year, with notable analyst Ming-Chi Kuo predicting that upgraded iPad Air and Retina iPad mini models will debut in the third quarter of this year and adopt the Touch ID system introduced on the iPhone 5s last year.

Make thinner display, bigger battery. The same overall thickness as the current air, I would be happy.
Comment

And hopefully gone will be the days of dust under the glass.
Comment

**These photos are sponsored by 3M.**

I'd shoot for slightly larger battery.

this way the case manufacturers keep the same design and folks upgrading won't need to rebuy a case.
Comment

myrtlebee said:
And hopefully gone will be the days of dust under the glass.
Click to expand...

But also gone would be the inexpensive repairs of cracked glass.
Comment
L

I would love to see a digitizer included for more precise stylus use...
Comment

What else is in that box below the display? Whiffle balls? Are Apple's manufacturing partners diversifying? And are they lighting the room with neon?
Comment
M

The only bad thing about the iPad Air is that the screen feels really hollow and cheap. I also hate seeing that gap between the lcd and screen.

Those legs in the background are quite distracting....

On a more apple related note, the quest for thinness and lightness continues, surely there has to be a point where apple will stop making devices thinner and improve on battery. Or I suppose battery technology will continue to get better so they can continue to make thinner devices.... who knows
Comment

Current air already feels cheap due to thin glass on display. This would be a step backwards too
Comment
W

lewisd25 said:
I would love to see a digitizer included for more precise stylus use...
Click to expand...

You are the only one who would want that. Everyone else loves using a rubber crayon to write and draw. /s
Comment

Tankmaze said:
Make thinner display, bigger battery. The same overall thickness as the current air, I would be happy.
Click to expand...

Next gen iPad is my next purchase. Looking forawd to it. Just have to hope my first gen Nexus 7 can hold out. She's hurtin.
Comment

I was just sleepy enough to briefly think this was an iPhone 6 front panel.
Comment
G

"MacRumors spoke with iFixit co-founder Kyle Wiens, who noted that the assembly could indeed be legitimate and use a manufacturing process similar to that seen on the Retina MacBook Pro."

If that's the case, would touch capability eventually be added into the MacBooks?
Comment
C

Well - if Apple moves to a 3rd quarter, 4th quarter release for everything - how's this site gonna hold up?
Comment
M

This is where THIN is more important than that of a Macbook Pro. Keep the thinner and longer batter life iPads and iPhone. Give us our function back in the Macbook Pro line.

this way the case manufacturers keep the same design and folks upgrading won't need to rebuy a case.
Click to expand...

They will tweak it ever so slightly at minimum. New cases at $30-$80 (which cost them $2-$5) are a cash cow for Apple. Can't let you re-use the old one, no money in that. Kinda like making your Macbook Pro soldered and glue together so you can't repair, but rather only be able to replace it.

So much for being a "GREEN" company LOL
Comment
2

I know that it is likely the end of the 3rd quarter when these get released, but I hope apple moves it up a bit. I would think getting product out througout the year would help them versus having their sales lag in the first half with no hardware releases and then have the sales bump only at the end of the year. I for one and ready to buy the new ipad with touch id and my wife is already trying to take my current ipad away, so this would be a win for everyone, Apple/me/my wife. Although, i just need to be careful that she does not end up with the new one
Last edited: Apr 18, 2014
Comment