Leaked images allegedly showing Samsung's next folding smartphone have appeared on Weibo, offering a preview of what the company's Galaxy Fold successor could look like. 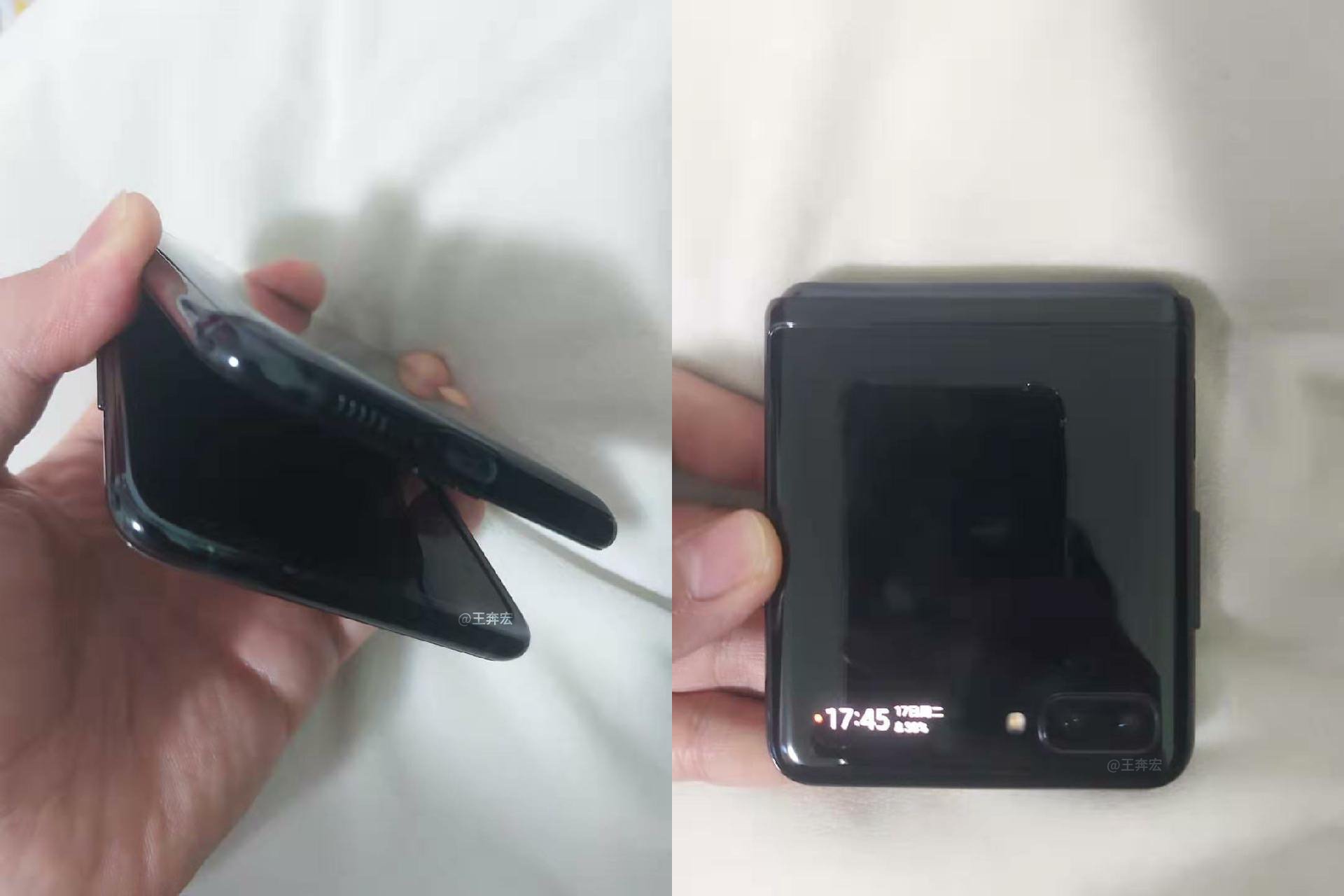 Images via Wang Benhong - Weibo​
First spotted by mobile leaker Ice Universe, the images depict a clamshell-like device reminiscent of a traditional flip phone that folds up into a compact palm-sized phone, making it small enough to easily fit into a pocket. Two cameras can be seen on the back next to a digital clock readout.

Bloomberg first reported in March that Samsung plans on releasing two additional folding smartphone models to succeed the Galaxy Fold. One was described as a clamshell-like device that folds from top to bottom, like the one shown in the images. Another, high-end folding smartphone is also reportedly in the works.

Samsung actually shared concept images of its clamshell device in October, and these images do bear a resemblance to them. Samsung offered no details at the time on when it planned to bring the handset to market, but earlier this month Bloomberg reported that the Galaxy Fold clamshell device would be launched in February alongside the Galaxy S11. 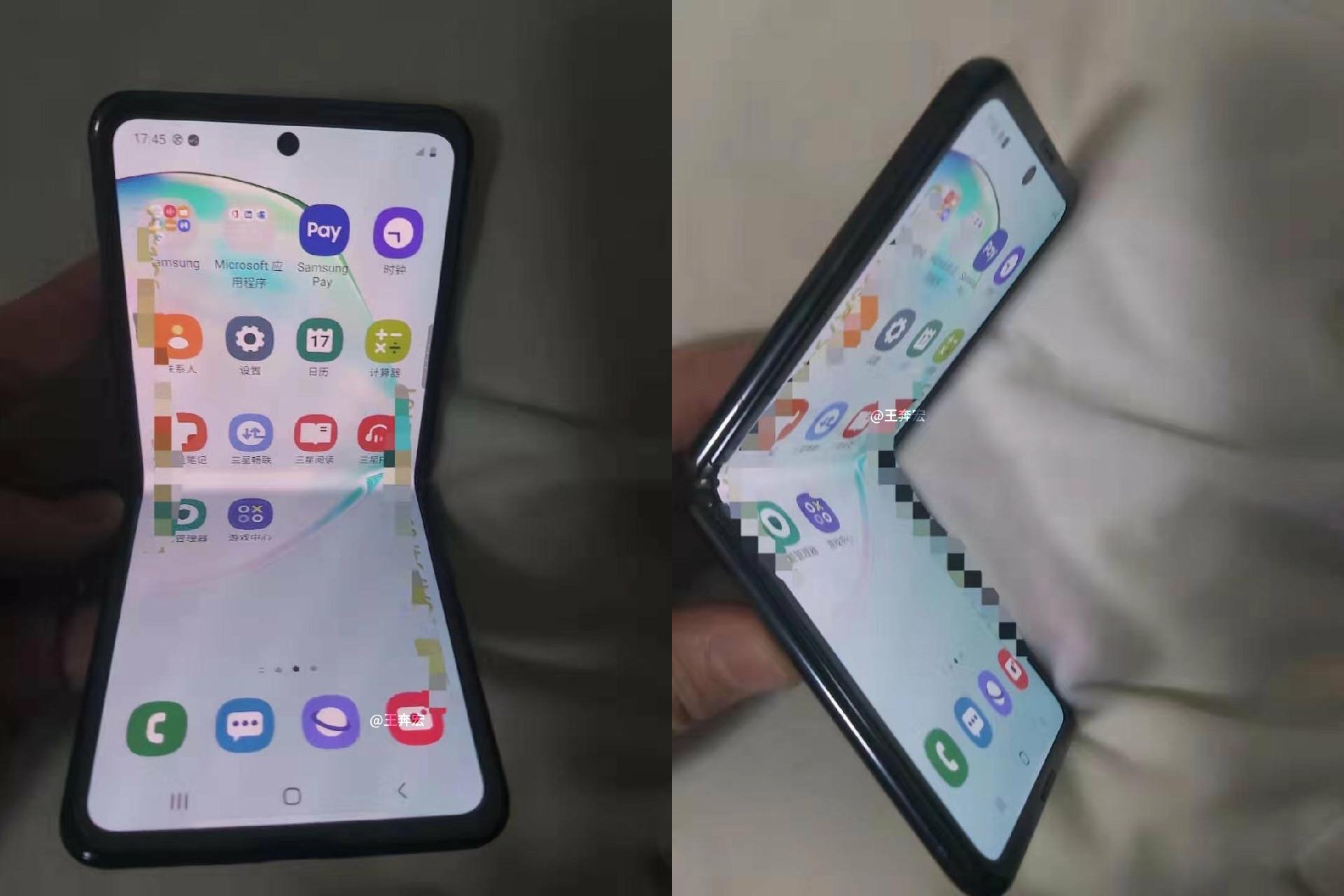 Images via Wang Benhong - Weibo​
Here's where some of the details don't add up though. Bloomberg's latest report claimed the Galaxy Fold successor will get the same five-camera setup that's coming to the Galaxy S11, but the device in these leaked images appears to have only two cameras. It could be that Samsung decided having a giant photographic arsenal strapped onto the back of a flip phone wasn't a good look, but we'll just have to wait and see.

The new clamshell-like Galaxy Fold is expected to be more affordable than its book-style predecessor, which costs $1,980 in the U.S. Last month, Motorola announced the resurrection of its Razr brand in the form of a similar-looking vertically folding Android phone. The new mid-range Razr will cost $1,499 when it's released in January, so it'll be interesting to see if Samsung is willing or able to keep the price down on its next flagship foldable.

There are no rumors suggesting that Apple has plans to release a foldable smartphone in the near future, but Apple is undoubtedly looking into foldable devices given that its major competitors are coming out with them. In the past, Apple has patented some foldable display technology, and a rumor earlier this year suggested Samsung has provided folding display samples to Apple.

They realized moto had the better idea for an foldable phone
Current smartphone tech unfolded
Past pocket friendly folded
Reactions: cbaca51, Gasu E., Lazy and 2 others 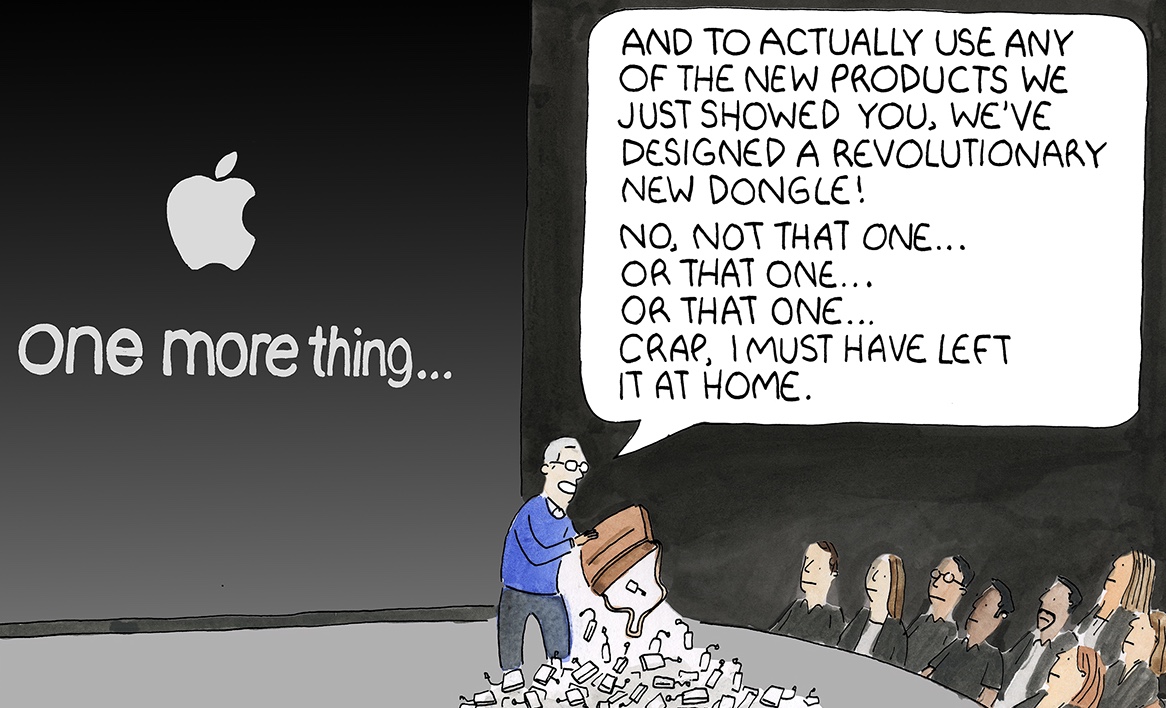 I still don’t think the materials are durable enough to last many fold/unfold cycles and stress on that part of the screen.
Reactions: Morgenland, cbaca51, Brandhouse and 15 others
I

MarkAtl said:
I still don’t think the materials are durable enough to last many fold/unfold cycles and stress on that part of the screen.
Click to expand...

Agreed. Think about how many times a day you lock and unlock your iPhone. Now imagine physically folding a device that many times!
Reactions: kltmom, AppleWes, BigMcGuire and 7 others

how to put the maximum wear and tear on the flexible display... a disaster waiting to happen
Reactions: spotlight07

if the screen would be more durable I would totally dig that concept.
Reactions: Lazy, splitpea and Agit21

I will never understand why would anyone like to make a folding phone today.
Reactions: Morgenland, andeify, cbaca51 and 8 others
R

iMatt. said:
Agreed. Think about how many times a day you lock and unlock your iPhone. Now imagine physically folding a device that many times!
Click to expand...

Maybe this is what reduces people’s smartphone addiction.
Reactions: coolfactor, Lazy and AngstyKylo

Ahhhh flip phones... reminds me of the Motorola StarTAC I had in 1999. Been there done that. The display is nicer though.

Glad those 20 years haven’t gone to waste
Reactions: pianophile and raybob
B

Clamshell makes sense, it's the most reasonable and sensible phone style. A shame Samsung keeps beating Apple to the punch these days.
Reactions: kiensoy, EdRed, albebaubles and 2 others

bluush said:
Clamshell makes sense, it's the most reasonable and sensible phone style. A shame Samsung keeps beating Apple to the punch these days.
Click to expand...

Pretty sure it’s all Tim Apple’s fault. He’s a beancounter who only cares about $$$$. Steve would never allow it, he’s spinning as we speak. Apple’s truly lost its way, and can’t innovate anymore. They spent all their money on the spaceship. It’s gonna cost £5,000!

Or maybe it’s Jony Ive’s fault, because he wants everything thinnnnner—and folding it doubles the thickness... do’h! And he’s fat. And I hate the way he talks. And spells his name.

If Samsung does edge to edge displays why not have 2 physical displays hinged together instead of adding a foldable layer?
Reactions: EdRed, jimmy_uk, Lazy and 1 other person

This whole folding thing is a desperate attempt to find something new and exciting for the hell of it, isn’t it? who asked for this really
Reactions: Morgenland, andeify, skipper63 and 18 others
A

I really like this design. Unfortunately the materials wont last long when you flip your phone like this 100 times a day.
Reactions: Lazy

Imo, this is one of those things that at the current time ‘feels’ like the future, like Blu Ray (back in 2003) felt like ‘the future’ but then the technology leapfrogged it (streaming HD in the case of blu ray).
So I think we’ll look back at folding phones as a technical “revolution” that never really was.
Last edited: Dec 19, 2019
Reactions: MikeMo, decafjava and Iconoclysm

MarkAtl said:
If Samsung does edge to edge displays why not have 2 physical displays hinged together instead of adding a foldable layer?
Click to expand...

My thoughts exactly. I’d appreciate a foldable phone, with an oled touch-bar style ‘Today’ view when closed. I’d happily forgive the mm. thin break between the screens. Might also inspire some fresh UI that takes advantage of the spacing.
Reactions: jimmy_uk, Lazy, BigMcGuire and 1 other person

I got a funny feeling there's going to be a bendgate 2 electric boogaloo when this device is released.
Reactions: Lazy and HappyIntro
T

MarkAtl said:
If Samsung does edge to edge displays why not have 2 physical displays hinged together instead of adding a foldable layer?
Click to expand...

I agree from a mechanical point of view. I'd find it very hard to trust that a folding screen would last very long.

However, it doesn't work from a usability POV. The UI of Android, iOS and - most importantly - all current Apps is a single, large, continuous screen that you can easily swipe the full length/width of for scrolling, gestures etc.

Imagine (say) scrolling and zooming a map, or a "long" web page spread over two small-ish screens separated by a bezel. Nuh-uh.

With a "Nintendo DS"-style setup, in the absence of App support, most of the time you'd be using it as a small display screen and a "soft" keyboard - and I'm not sure that would work well in this form-factor with two screens that would be a lot smaller than the typical modern phone.

It might work better in the "original" Galaxy Fold format - i.e. 2 full-sized modern phone screens so you could have two side-by-side apps or - in landscape mode - one full-sized screen + a tablet-sized keyboard.
Reactions: RedTheReader

This is so naive. Meanwhile at Samsung, they're selling you the prototypes for devices they haven't figured out how to make yet. And you're busy hating the company that sells working products...
Reactions: Morgenland, Keane16, tongxinshe and 24 others

iMatt. said:
Agreed. Think about how many times a day you lock and unlock your iPhone. Now imagine physically folding a device that many times!
Click to expand...

Microsoft had the right design goals for a product like this in a 2009 tech demo, but we are still far, far away.

I did not expect a folder called Microsoft in there!

Also, what exactly is redacted or censored with the blurry bits there? Or is that just that the picture quality is low?
Reactions: Lazy and LlamaLarry

bluush said:
Clamshell makes sense, it's the most reasonable and sensible phone style. A shame Samsung keeps beating Apple to the punch these days.
Click to expand...