Apple is working on a multitude of prototype projects ranging from the expected to the fantastical, according to Jefferies analyst Peter Misek, who suggests the prototypes are "floating around" in the Asian supply chain. In a research note to investors, Misek describes several prototype products, including an iTV with 4K, gesture control, and voice control, along with an ARM-based touchscreen MacBook Air, and an "OLED iPhone that unfolds into an iPad mini."

In contrast to investors' fears, the supply chain thinks Apple's innovation may be accelerating. With more than the usual number of prototypes floating around, here are some highlights (with the caveat that Apple might be purposely leaking to confuse competitors): 5.5" OLED phone with 2k >660ppi display; iTV with full gesture control, voice control, and 4K; touchscreen MacBook Air running on A8; 4" OLED iPhone that unfolds into an iPad mini; smartwatch prototypes including curved bangle-type and curved-screen; and wearables including health care appliances and payment authentication modules.
Click to expand...

While some of these products, such as the smartwatch prototypes sound plausible, some, such as the folding iPhone, range into the almost-unbelievable. 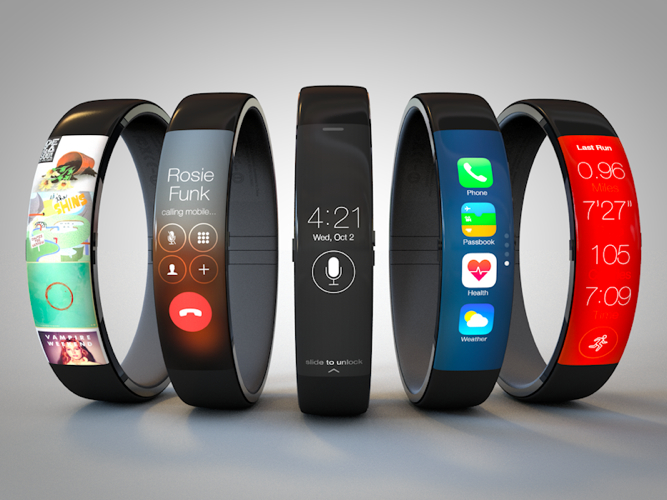 Curved bangle-style iWatch concept by Todd Hamilton​
​
Given Apple's commitment to secrecy, it seems unlikely that many of these described prototype devices are available in the Asian supply chain. Apple maintains a highly exclusive design lab for its prototype products, which are likely produced in-house or in very small quantities by manufacturing partners, leaving the legitimacy of the "prototypes" discovered by Misek in question.

Apple has been rumored to be working on Apple television set prototypes and experimenting with ARM-based Macs, but it is unclear whether these type of products will make it out of the prototype stage.

Peter Misek has been frequently incorrect with his predictions, but occasionally, one of his reports is accurate. He was one of the first analysts to point towards early iPhone 6 prototypes in a 4.8-inch size, but he also incorrectly predicted several elements of the iPhone 5s and has long championed an Apple iTV that has not materialized. He has previously suggested Apple planned to merge iOS and OS X, which was not true, and he has predicted Apple signed deals to create an iTunes Netflix competitor, which did not happen.

In his research note, Misek also suggests that the iWatch is ready to go into full production and could thus be announced at any time, but this contrasts other reports that suggest the device will begin production in July. Misek believes the rumored 5.5-inch iPhone, which is said to be somewhat delayed in comparison to the 4.7-inch version, will launch at the earliest in November with a new in-cell display coating technology.

Waiting for the inevitable "This isn't the iPhone that was in those pictures".

"Analyst" and "crazy" in one sentence (headline) ... that pretty much sums it up - good choice of headline.

4" OLED iPhone that unfolds into an iPad mini ... really? lol

An iPhone that unfolds into an iPad? Let's go one step further and make an iWatch that can unfold into an iPhone and then unfold again into an iPad.

Next year: another folding step will be added so that you can carry the new Mac Pro on your wrist.

Yvan256 said:
An iPhone that unfolds into an iPad? Let's go one step further and make an iWatch that can unfold into an iPhone and then unfold again into an iPad.

Next year: another folding step will be added so that you can carry the new Mac Pro on your wrist.
Click to expand...

so how can a iPhone fold into a iPad mini?
D

Ah, so he's taking the "predict everything and eventually I'll be right about something" approach. How wise of him.
R

MacRumors said:
Peter Misek has been frequently incorrect with his predictions, but occasionally, one of his reports is accurate.
Click to expand...

This has got to be one of the more humorous statements in a MacRumors article recently.

Silly season is upon us.

I am surprised though that we haven't had more WWDC leaks. Unless the 9to5Macs of the world are holding stuff until the last minute?
J

Prototypes are made for experimental usage. Nothing there to be exited about. Not in the near future if you ask me. It's all about testing hardware and software and bringing it to the next level: in house prototyping behind closed doors.

How about a Mac mini with Retina Display?
0

Apparently even crazy gets you paid.
K

If those people would at least do the math right.

Yvan256 said:
An iPhone that unfolds into an iPad? Let's go one step further and make an iWatch that can unfold into an iPhone and then unfold again into an iPad.

Next year: another folding step will be added so that you can carry the new Mac Pro on your wrist.

Or they could combine paper and liquid metal…

Everyone should have stopped reading after they saw the word 'Analyst'.

and an "OLED iPhone that unfolds into an iPad mini."
Click to expand...

As long as it doesn't look anything like the common Nike Fuel Band used above, then all should be good. Nike can keep up with the apps but not the overall design. Say no to the bracelet!

Even a broken iWatch is right twice a day...

Ok, I'm being honest when I ask this: What have these people done to become "analysts" because obviously some of them are worse than the average person... :/

What???? No iPad that turns into a pizza at midnight, then blows you? Where's the innovation????

Colour me dubious... when working in Apple QA we'd typically test on big, ugly plastic/metal prototypes that had no relation to the end-product.* We wouldn't find out what the product would look like/cost or even the final specs until the keynote, along with everyone else.

It's really hard to imagine prototypes floating around the supply chain, until they're starting to ramp up production. And I doubt they're ramping up all those devices.

* I can think of at least one bug that resulted from QA not being able to test on the final products until after announcement.

I know the iTV has been a rumor for a long time. Would apple really get into the TV game? It just seems like they would charge such a ridiculous price that sales would be few and far between. If a 65" 4K tv goes for $4,000, apple would want $6-7. I think taking over the living room via ATV is the smart move. The same thing they have been doing.
You must log in or register to reply here.
Share:
Facebook Twitter Reddit Email Share Link
Register on MacRumors! This sidebar will go away, and you'll see fewer ads.
Sign Up
Top Bottom