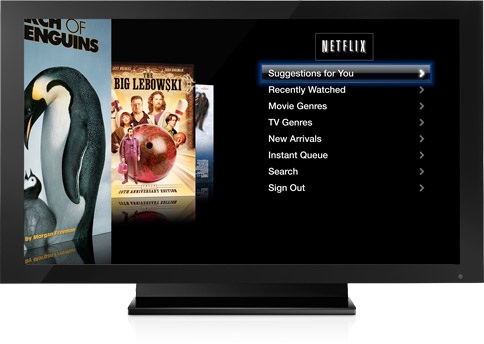 Speculation about Apple's plans for its massive new data center in North Carolina has been running rampant for quite some time, and we're always hesitant to place too much emphasis on claims of research analysts, but one report from Jefferies analyst Peter Misek is gaining some attention today for its claim that Apple may be preparing to take on Netflix in the streaming video subscription market.

Apple is on the cusp of launching a "a new far reaching cloud-based service" focused on video, writes Jefferies analyst Peter Misek in a big report this morning.

Last week, a report surfaced claiming that Apple had locked in as much as 12 petabytes of storage purportedly set to support video download content. While Apple has been said to be preparing to roll out a cloud-based MobileMe revamp that would allow users to store video, music, and photos on Apple's servers, Misek argues that Apple will further use the capacity to launch a Netflix-like service that would serve to further drive sales of Apple hardware.

Misek sees Apple's plans to potentially double the size of its new data center in the future as the first step towards a massive expansion of its server capacity that could see the company rolling out multiple such sites around the world in the years to come in order to support massive storage and streaming capabilities for such services.

It would make more sense (to me).
M

I really can't see Apple getting more content at the same price as Netflix, or the same content at a lower price.

Granted Netflix can't sustain their pricing model forever, but Apple doesn't have many instances of making "better" and "cheaper" at the same time.

It would make more sense (to me).
Click to expand...

And in my opinion, in the right spirits.
M

This doesn't make sense to me... Why would they have included Netflix on the ATV2? I'm thinking no.

Makes sense. That's probably one of the biggest uses of the ATV and Apple doesn't get a cut of that action.

That being said, Netflix inclusion is the only reason I bought the ATV2. If they cut Netflix, I'll by another product.

I doubt it. There would be an "anti-monoply" uprising so big that it makes the AT&T/T-Mobile merger look popular.
I

It actually is an overall good recap of basically everything that is out there concerning possible iOS cloud/TV content/Apple TV.

Having little snippets pulled from here and there dont do it justice.

Netflix disadvantages:
- only available in USA and Canada (extremely limited selection in Canada)

Apple advantages:
- could be launched in a lot of countries (probably everywhere there currently is an iTunes Store)
- already have a lot of iTunes Store user accounts worldwide

Apple disadvantages:
- would probably require an Apple-made device to access the content (bonus: no Silverlight installation required on Mac), as I don't see Apple making an app for the Xbox360, PS3, Wii and other set-top boxes (they'd rather sell you an

TV)
- their servers are located in the USA, so I don't know if it's enough to serve streaming media worldwide. Do they currently have servers in other countries for the international iTunes Stores?

Technical issues aside, however, it all boils down to selection and price.

It would make more sense (to me).
Click to expand...

Oh Gosh no. Unless Apple kept their (Netflix') pricing methodology...sorry but 99 cents for ONE TV show rental is ludicrous in comparison to Netflix'
I

If they do something like that, power to them- as long as they don't charge a ridiculous fee I'll probably subscribe if it offers something netflix doesn't....but I don't see me dropping netflix anytime soon. If they decide to try and shut-out netflix on their (apple's) platforms in order to promote their own product, I will definitely side with netflix. Netflix has been good to me and I'm pretty loyal.

Although, it might be really nice (at the beginning at least) as far as buffers and video quality go: My ISP is ****ing horrible about throttling Netflix, Youtube, Hulu, etc. I have an 8 down/2 up connection, and yet it takes me 10 minutes of buffering to watch a 5 minute 320p youtube clip? **** that. If they weren't the ONLY ISP available here in podunk, I would drop their ass.
T

Mrawr said:
This doesn't make sense to me... Why would they have included Netflix on the ATV2? I'm thinking no.
Click to expand...

exactly. this analyst doesnt know what he's saying. Apple would never off a competing service in a hardware product if they planned to compete against it.

this story is bunk
P

Apple is unlikely to buy Netflix. Some of Netflix's contracts with media companies likely include a termination clause that can be invoked when the company is bought. That's likely why Apple had to shut down Lala after they bought it.

It all boils down to that data center in NC.
Apple has taught me to never expect little, so my money is on somthing so outrageous no analyst will think of it.

The market cap of Netflix is 12 billion, add another 3 to 5 billion for a buyers premium, and it would take a pretty large chunk of the Apple cash reserves.

I don't buy it. Apple creates services that help it sell more hardware. I don't see creating a Netflix competitor would help to do that.
B

There's a lot of content that the on-demand portion of netflix doesn't include. If Apple can get more new releases I could see it as a complementary service to netflix--but not a replacement. In the end, much of the most popular content will still only be available on disc from netflix.

If this turns out to be true, I doubt Apple's price model could match the value in netflix. I'm sure it will be better integrated and more convenient to use however.
D

pmz said:
Only question. Why?

Ya. Just like Apple went pro-consumer with $.99 songs instead of buying the entire CD. Apple is not good for the consumer. Nopes. Trust me, its not.
P

pmz said:
Only question. Why?

Agree. If Apple bought Netflix they'll have to raise prices. Netflix is inexpensive, Apple is typically premium.
Also, Netflix Inc is quite expensive ($12B) and other than a subscriber base, I'm not sure if they have technology or business model that isn't too hard to duplicate...at least nothing strategic to Apple. P.

Mrawr said:
This doesn't make sense to me... Why would they have included Netflix on the ATV2? I'm thinking no.
Click to expand...

Why did Apple add iPod / iTunes support to a Motorola phone and then the next year introduce their own phone? Apple has the morals of an alley cat.
J

IMO Apple built this giant datacenter in order to launch its own search engine to compete with Google. Why ?

1) When Google launched Android, S. Jobbs became furious, saying that Apple respected Google and didn't try to go on the search market. He was calling for revenge. Soon after, Apple started to build this data center.

2) Google is now a strong competitor to Apple, and Apple isn't free to not use (yet) Google's services, like their search engine, Google Maps and so on. Clearly, Apple can't consider that with an happy heart.

3) This new datacenter is really much too big for just handling the few things rumors talked about : MobileME, video, etc. It's obvious they are watching bigger.