During last week's earnings conference call, CEO Tim Cook confirmed that Angela Ahrendts will be transitioning from Burberry and officially joining Apple this week as its head of retail. Her achievements and personality as the CEO of Burberry have been well-publicized, but her Midwestern roots, early career influences, and resulting business and life philosophies are less well-known. These characteristics were recently detailed in a lengthy profile by CNET. 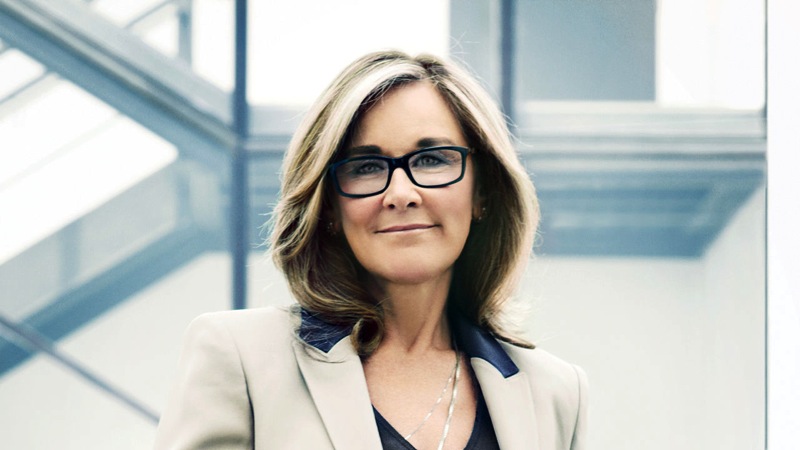 Ahrendts was born in 1960 in the small town of New Palestine, Indiana, where she was one of six children. As a young girl, she "lived vicariously through fashion magazines" and moved to New York after graduating from Ball State University to pursue her dream job in the fashion industry. She got her start at bra maker Warnaco and then landed a position at Donna Karan in 1989. She rose through the ranks at DK to eventually become President of the New York-based fashion house.

When Donna Karan changed its focus, Ahrendts transitioned to Liz Clairborne as the executive vice president and finally landed at Burberry, where she rejuvenated Burberry's image and sales as CEO of the London fashion house. When she started in 2006, Burberry was a well-known rainwear company and upon her leaving a short eight years later, the company is now an internationally acclaimed fashion label.

Ahrendts has a personal management style that keeps her in touch with her employees, traveling to stores to meet them and "communicating constantly" with them via email to thank them for their work. She credits her Midwestern values that taught her compassion towards others, humility, and hard work were the keys to success. It is this human touch that Ahrendts will be bringing to Apple's all-male executive team and will be a balance to the company's technology and engineering focus.

"Technology has given us access to the world and its sea of content, allowing us to never speak to another person if we don't want to," she said. "Computers and smart devices are among the greatest intellectual gifts ever created for man, but if not balanced with human contact, may offer little to develop ones heart. Don't get me wrong, I am mesmerized by this Digital Tsunami, but Google doesn't have all the answers, and are all those people on Facebook truly your friends?"
Click to expand...

Ahrendts will be joining Apple at a time when its retail sales are flat, despite an increase in the number of retail stores opening worldwide. As noted by Bloomberg's European correspondent Caroline Hyde, analysts are watching Ahrendts closely with the expectation that she will bring her luxury flair to Apple's retail operations and repeat with Apple what she did with Burberry.


​
Ahrendts will head up Apple's retail push in 2014 and beyond after several years of instability in the division. The company confirmed during its recent Q2 2014 earnings conference call that it will continue to invest in retail stores in 2014. It recently opened its first retail stores in Brazil and Turkey, expanding Apple's retail presence to a total of 15 countries. Apple also will continue its focus on China with a plan to triple the number of Apple retail stores in the Asian country over the next two years.

Can we please have more articles about her?

From my own knowledge, I think she will fit well in the environment.
T

ct2k7 said:
From my own knowledge, I think she will fit well in the environment.
Click to expand...

don't throw a line like that and go, elaborate please. Have you met her? Know someone who works with her?

ct2k7 said:
From my own knowledge, I think she will fit well in the environment.
Click to expand...

From my own knowledge, which includes nothing on Angela Ahrendts outside of Macrumors, I think she will fit pretty well in the environment.
Z

Apple needs something to help them out retail wise. I was just there for the iPhone 5 sleep/wake button recall and it was a mess. I had to change my appointment twice because they couldn't see me within a 30-60 minute window. When I finally did get to ask someone why I had been sitting and waiting over 20 mins to be seen, after pushing on him hard for an answer I ended up being told that they are accepting walk-ins for this issue and I was waiting for them to be helped first. I felt like Larry David when I had to explain to him the reason people make appointments and how the process should work.

Can we get a daily countdown article?
C

Trying to humanize retail greed by making it social...this is a new low for Apple.

While all my Facebook "friends" may not be true friends, NO staff at an Apple store is ever going to be my friend, even in passing.

I don't need a more personal touch to the Apple retail experience, what I would prefer if Apple reduced their prices so as to not grab 500% markup on all their devices, you know, make its a little less dehumanizing for people to buy Apple products.
T

I love the quote from her about bringing more heart into technology. She's obviously capable at what she does but it sounds like she has well thought out values too. The other guys have had a decade to catch up (though not entirely) on design and engineering. Ahrendts needs to bring back that feeling of being an Apple customer you had in the late 90s or early 2000s. It was exciting. Apple was still small enough for a customer to feel an individual connection to them. You had no idea where the company was going but it was getting better all the time. The Macs from that time had exuberant, colorful designs that really set them apart. We could use a little more of that feeling.
Last edited: Apr 28, 2014
R

iMerik said:
From my own knowledge, which includes nothing on Angela Ahrendts outside of Macrumors, I think she will fit pretty well in the environment.
Click to expand...

Mac Fly (film) said:
Did MR just compare Apple's retail position now to Burberry's retail position in 2006? What if there was a global financial crisis and that is the reason for the flat growth, but very good sales.
Click to expand...

I don't recall people who bought burberry being as effected as most other people were in 2006. The jobs that took the largest losses were retail and minimum wage.

ChrisCW11 said:
Trying to humanize retail greed by making it social...this is a new low for Apple.

While all my Facebook "friends" may not be true friends, NO staff at an Apple store is ever going to be my friend, even in passing.

I don't need a more personal touch to the Apple retail experience, what I would prefer if Apple reduced their prices so as to not grab 500% markup on all their devices, you know, make its a little less dehumanizing for people to buy Apple products.
Click to expand...

Man do we need down vote back...
P

hope she leaves all the tacky gold at the door.

She seems like a good fit for Apple Retail as it is now but offers the potential to transform the retail experience into a fashion-icon sort of experience and I'm looking forward to that. This is the chance for Apple to spring away from being stores full of hardware to being an "experience" like walking into Ferragamo or some other iconic name store.

Today's Word of the Day is "transitioning".

ChrisCW11 said:
It is this human touch that Ahrendts will be bringing to Apple's all-male executive team
Click to expand...

Because Apple has been lacking in "human touch"

She turned Burberry to Bieberry. Things will be even easier with Apple since they already sail in the Bieberian waters for quite some time. Expect quilted laptop bags and engraved apple patterns on the laptops. And do not forget $8.000 crocodile leather chargers for the biggest fanboys.
W

MacRumors is playing with Zeno's paradox with all these articles counting down to the moment she actually starts the job. They're going to fill up the hard drives before she manages to get her foot through the door.

tkermit said:
Because Apple has been lacking in "human touch"
Click to expand...

I give her tremendous credit for pointing out a fact regarding the technological implications on socialization; a topic some may find offensive. We have become more dependent on technology as a method for communication, with diminishing physical contact.

I'm very interested in the idea's and concepts she may bring to not just Apple, but technology in general. She is a self-professed "beginner" with technology (compared to most of us), but she manages to understand it and use it in productive and creative ways while diminishing any negative implications (her work at Burberry is a prime example).
Last edited: Apr 28, 2014
2