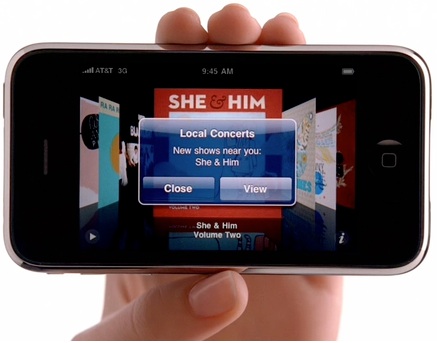 Close on the heels of last week's release of its new 'Commute' iPhone commercial, Apple yesterday released yet another ad entitled 'Concert' and posted the commercial to its iPhone ad gallery.

Like other recent commercials, 'Concert' demonstrates the iPhone's features in the form of a narrative. In this ad, the narrator uses Shazam to identify a song she had heard, downloads the song from the iTunes Store, and listens to it though the iPod music player functionality. The commercial then shows off the iPhone's push notification system as Local Concerts notifies the narrator of an upcoming local show by the band and allows her to buy tickets to the concert.

As with other recent ads, Apple has utilized the narrative-based commercials to feature just a few individual applications while also folding in demonstrations of the iPhone OS and AT&T's network such as iTunes Store and iPod functionality, push notifications, and simultaneous voice and data transmission.

This shows how to convert an exposure experience to a buying experience of media to a personal experience with a higher price point. This happens to be a concert, but it will soon propagate to a much wider range of products. It will be Apple's devices that bring you there and get fees for each layer of transaction you opt in for using their device.

There may be other ways to buy those same products and experiences outside of the Apple "garden", but the main point is the "garden" makes discovery easier, conversion easier, and upsell the natural path for otherwise "impulse" users or even "browse" users.

This is going to be a thing.

Who buy's tickets to a concert for someone they just heard about for the first time?

superstrikertwo said:
Who buy's tickets to a concert for someone they just heard about for the first time?
Click to expand...

If you've never heard of the group then maybe that means it's an up-and-coming band, not an established group with their huge ticket prices.

The solution is to use your iPhone to find a date who will pay for your ticket!
M

The ad seems great up until the last five seconds.

What do you think of the line, "I still don't know how my iPhone does all that" ?

They are trying to play to this idea that Apple devices are magical. I don't think someone that introspective would utter that line - especially someone able to make all the apps work together and have the money to purchase an entire album and tickets on a whim.

Very cool. I've always wanted to get a message from a robot and then do exactly what it says.
;-)

Doctor Q said:
If you've never heard of the group then maybe that means it's an up-and-coming band, not an established group with their huge ticket prices.

The solution is to use your iPhone to find a date who will pay for your ticket!
Click to expand...

We have the State Theater here in the DC area.. great bands that most have have NEVER heard of - at great prices...

In the end there are apps for that

I have met some nice folks to just hang out with when I had nothing going on with some of the social apps...

How well does Shazam work with live concerts? I've had little or no luck!
A

aggemam said:
How well does Shazam work with live concerts? I've had little or no luck!
Click to expand...

I've had it work 1 time at a concert, but shazam is only supposed to be able to work with recorded music, not live music, singing or humming.
M

My phone can do that!

No its good ad
Q