Anyone else love the battery life on the iPad 3?

This is normal for me, even before iOS6 I could tell I would get similiar battery life. This is after a full charge about 10 days ago .. I charge usualyl 1-2 times a month generally, this thing is awesome. I constantly get about this much usage out of it, emails/web surfing/maybe 30-60 minutes of video playback. 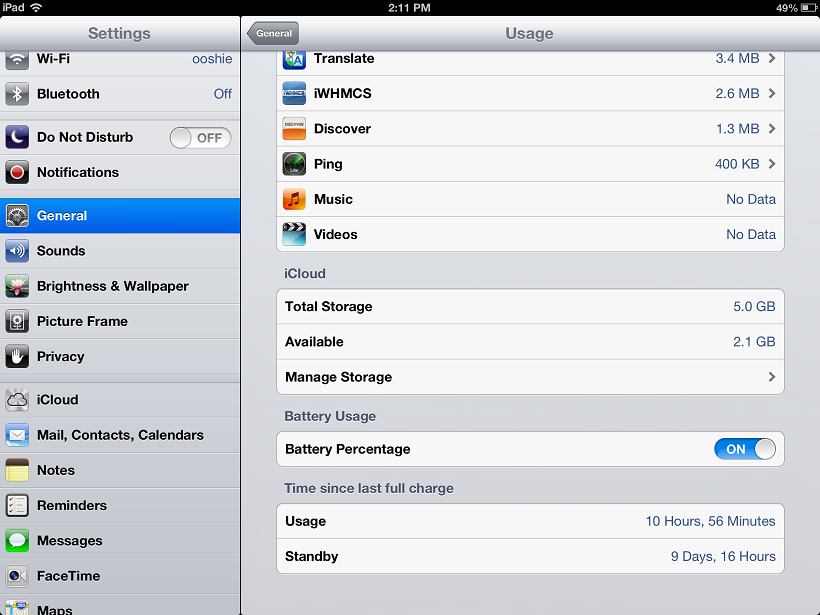 Last Time I checked, I got about 18 hours of usage, and 1 day standby.

Sunny Florida, on the Gulf Coast in Homosassa Fl

PortableLover said:
Last Time I checked, I got about 18 hours of usage, and 1 day standby.
Click to expand...

I like my iPad 2 battery life and I would guess version three would be better.
C

Mines pretty darn good. This iPad 3 is really an amazing device. Apple hit a home run with this thing.
T

vivithemage said:
This is normal for me, even before iOS6 I could tell I would get similiar battery life.
Click to expand...

Is this "time since last full charge" new to IOS6?

tthip said:
Is this "time since last full charge" new to IOS6?
Click to expand...

Honestly did not think it would go beyond 10 hours of battery, really happy with this product.
N

And I thought my ipad 3 battery life was good

This is my iPad at 3% left btw

The iPad 3 has awesome battery life considering the screen it has to drive.
B

Keep in mind that the battery count will only reset once the iPad has reached a full charge (sometimes if you pull the cord out when it hasn't been at 100% for long it does not reset) and it seems to add usage time to the standby time. (so 10 hours used = +10 hours standby)

I'm not sure if playing audio in the background when sleeping counts as usage time, or standby time either.

I have definitely noticed an extra couple of hours battery life out of iOS 6, as they seem to have fixed whatever bugs were causing idle CPU usage to gradually rise on iOS 5. (my iPad 2 & 3 would gradually increase to about 20% idle CPU usage over the course of a week until they were reset a couple of times)

I let it charge overnight, so it definitely reaches 100%!

Nice to hear some positive news about ios6.

Yep. Mine has been going a good 3 days without needing recharging.

My battery life definitely suffers using 4G, but if I shut it off when I am home, which I do, I get stunning battery life.

With 4G and Wifi on, I can barely make 2 days. If I shut 4G off, I easily double that
S

Here's where I'm at right now. I'll report back in a week when this thing dies. This is an iPad 2 wifi. 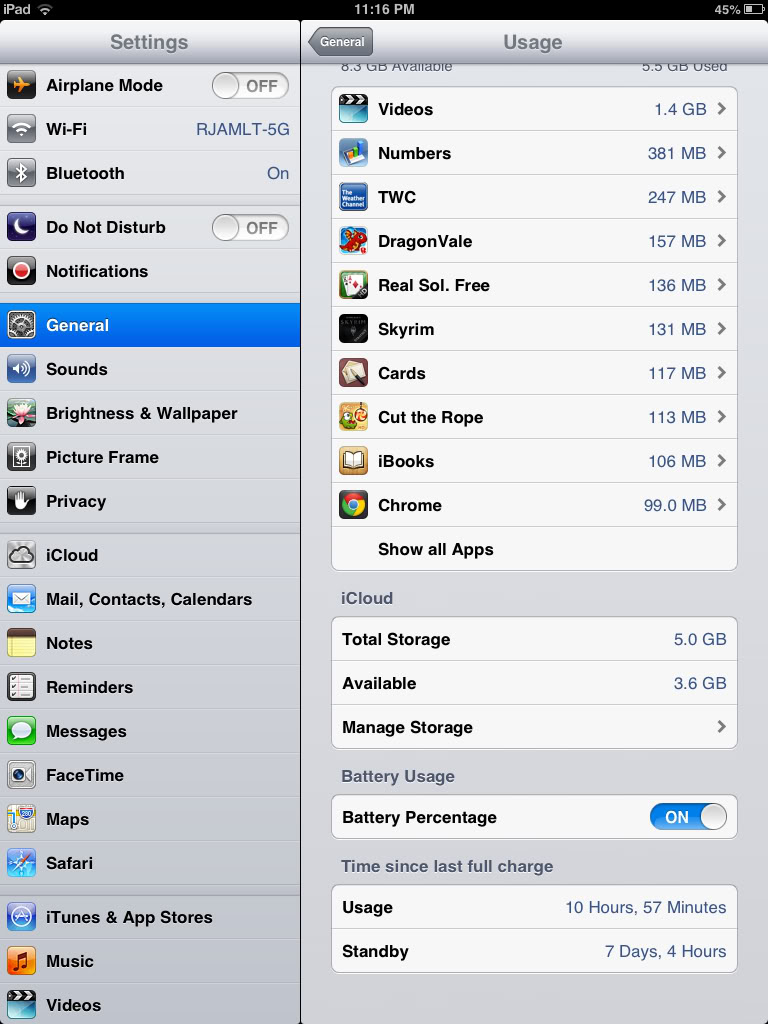 Mine is always dead at the end of the day...

I use it for school, while riding the bus (45 minutes total a day) I play games on medium brightness. During school, always maximum. It gets about 7 hours of usage a day.

My first iPad 3 battery was great. I watched 2 full movies and had around 30-40% left on the battery. I had to return my first iPad 3 because of the defect.

So now I'm monitoring this new replacement iPad 3. Out the box it was charged but after 8hrs of having it, the battery depleted fast. The major thing I was doing was downloading books and resetting all the passwords. I let the battery die and gave it a full charge before using. So far its been so so. I can check my mail and it will drop a percent.

When looking at all these responses it seems like there are many different battery usage hours. I wonder why. Is it because of how old the battery is or are there many different types of batteries? I guess it also depends on if you are using an original battery or a generic non-brand?

I just got mine Wednesday. After reading all these responses I'm going to return it.

I checked my iPod and didn't see a LowBattery report. On my iPad that just got replaced it says in the Diagnostic Report LowBattery.


To answer your question, it depends on what you are doing. I lost 10% just by it being turned on with the home screen. No apps running.

My battery was wayyyy better before iOS6, now it drains really fast when used, standby is just as good though.
S

dang that is impressive. i'm currently at 50% with over 9hrs usage and 3 days standby. i'm surprised they waited this long to add usage stats to the iPad, considering its one of the areas the ipad really excels!
You must log in or register to reply here.
Share:
Facebook Twitter Reddit Email Link

iPad Does anyone own both the 11" iPad Pro and the iPad Mini? Is it worth it?

Wednesday at 6:56 AM
Maddlines
M
X
All iPads Does anyone else find typing a post on this forum on an iPad on iOS 13 insufferable?

Dec 23, 2019
Seanm87
S
Register on MacRumors! This sidebar will go away, and you'll see fewer ads.
Sign Up
Top Bottom