Apple is suffering from a major leak that has allowed 9to5Mac to discover images of the upcoming "iPhone XS" models and the Apple Watch Series 4, giving us an idea of what to expect when the new devices are announced on September 12.

As can be seen in the photo below, the new Apple Watch models feature smaller bezels for more visible screen space, which allows for new complications arranged in a round configuration, which could be a nod to the media invites that went out earlier today. 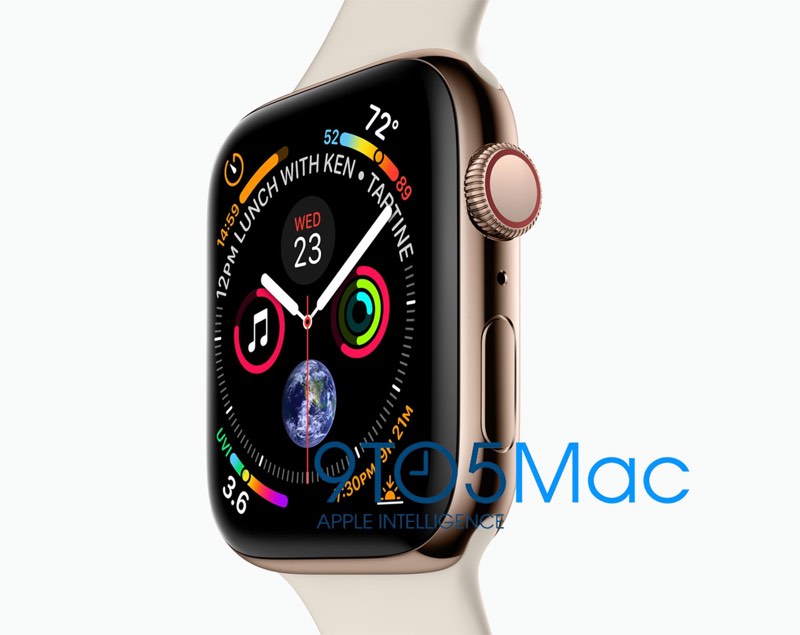 Rumors have suggested the displays of the new Apple Watch models are 15 percent larger, which appears to be in line with the video.

Apple is clearly planning to introduce at least one new watch face, which appears to be able to support a total of eight complications. Four complications are included on the watch face itself, underneath the hands, while another four are located at the edges of the display.

Interestingly, the Apple Watch in the image features a shiny gold enclosure, which appears to be shinier than previous aluminum models, perhaps suggesting a stainless steel option with a gold finish. It could also be shiner in the Apple marketing materials, though.

Apple will unveil the Apple Watch Series 4 models alongside new 2018 iPhones on September 12, at a 10:00 a.m. Pacific Time event that's set to be held at the Steve Jobs Theater on the Apple Park campus. Apple will live stream the event, but for those who cannot watch, MacRumors will be featuring live coverage both on the site and on our MacRumorsLive Twitter account.

Apple has the best leaks these days. No espionage necessary.
Reactions: ParaShot, obu90210, TMRJIJ and 54 others

My favorite part is that the red dot has been reduced to a thin red circle! Wish they could get rid of it entirely, but this is much better than leaving it the way that it was.

That watch face is way too cluttered. I mean, it’s kinda nice to have an option for an information dense display, and it makes sense if the new display face is bigger that they could pack more in. But things that look like this are supposedly the reason that Apple hasn’t allowed third party developers to design custom watch faces—it makes the watch look bad. That being said, they did about the best job you could possibly do when it comes to fitting that many complications on the display at once. I didn't even notice the calendar event text until I had looked at it for full minute.

I thought it was interesting that the original story on 9to5Mac didn't say anything about the rose gold stainless steel enclosure.
Reactions: ParaShot, Blakjack, PotatoLeekSoup and 36 others

Is that side button haptic? It doesn't look quite mechanical.
Reactions: ParaShot, IcyTexx, PotatoLeekSoup and 22 others

So beautiful... take my money!

What is that UVI thing on the watch face?? A new sensor detecting the UV?
Last edited: Aug 30, 2018
Reactions: Big Alsie, DoctorTech, ParaShot and 29 others

That looks sick!! And maybe even thinner, which means lighter, which both are fine by me!
Reactions: Bp778814, DoctorTech, ParaShot and 27 others

Can’t wait to get it
Reactions: MareLuce, Alexander Becker, The Barron and 10 others

Day One! Apple, just open up the preorders already!
Reactions: Bp778814, DoctorTech, Ravi_MR and 25 others

Curious if anyone recorded or has more screenshots of the supposed stream these were taken from.

Apple didn't "accidentally" leak these. They knew well what they were doing.
Last edited by a moderator: Aug 30, 2018
Reactions: BlankSlate, PotatoLeekSoup, Jayne Doe and 20 others
A

I suppose it confirms what we already knew, the gold color, design changes, larger display, and taptic button.

What we didn’t know about and looks amazing is that UI.
Last edited: Aug 30, 2018
Reactions: PotatoLeekSoup, zzu, ijbond and 5 others
M

Looks nice. Can't see myself upgrading from series three thiguh unless there's some surprise here that I'm not aware of.
Reactions: Diane B, rjp1 and tridley68
A

That digital crown looks SO much better not being completely covered in red!
Reactions: flowave, fatalogic, travisjaymoore and 48 others

Someone is going to lose his/her job today
Reactions: Ravi_MR, rome1453, Cesar Battistini and 5 others

gold is in (again)
Reactions: centauratlas
A

"Apple will live stream the event, but for those who cannot watch, MacRumors will be featuring live coverage both on the site and on our MacRumorsLive Twitter account."
hurry up with the event - if the leaks keep coming - they might as well open the pre-orders now
Reactions: 0958400, Swanson86 and fjfjfjfj
B

9 complications, no? 4 in corners, 4 in middle, and 1 (the next calendar event) in the clock’s circle.
Reactions: RabbitLuvr, eastmanweb, Big Alsie and 28 others

i think this may be my first apple watch
Reactions: pianophile, Blueline29, UltimaKilo and 28 others

That's one complicated watch face
Reactions: falcn, hourglass111, eastmanweb and 48 others
B