Apple Adds Attribution for OpenStreetMap and Others in iPhoto for iOS

With the release of iPhoto for iOS alongside the third-generation iPad back in March, Apple began using mapping data from OpenStreetMap and others rather than Google as it has for its other map-related products thus far. Apple did, however, come under some criticism for failing to acknowledge its use of OpenStreetMap data as required by the foundation overseeing the project.

In a Tweet yesterday, OpenStreetMap noted that Apple has now included attributed in iPhoto, a change that came with the iPhoto 1.0.1 update issued on Tuesday. The attribution is included in an extensive new "Acknowledgements" page for iPhoto accessible through the Settings app. 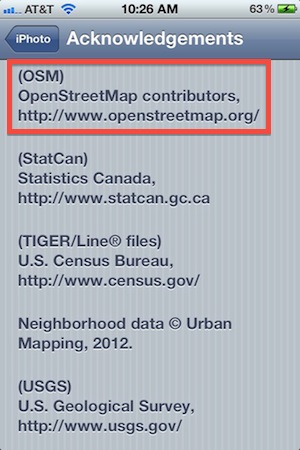 In a statement to TPM, OpenStreetMap's Richard Fairhurst noted that it seems to have taken the efforts of an iOS developer who was also an OpenStreetMap contributor to get Apple to take action on the attribution issue.

"The OSM Foundation has made informal contact with staff at Apple and, in addition, one of our volunteer mappers who is an iOS developer spoke to people at Apple. We believe it was the latter that precipitated adding the attribution - it's great to have such an active and engaged community!
Click to expand...

Given the large number of entities included in the new acknowledgements section, it seems likely that the delay of nearly two months in adding attribution was related to the logistics of making sure each group was credited appropriately without having to push multiple app updates to users.

Article Link: Apple Adds Attribution for OpenStreetMap and Others in iPhoto for iOS

As they should do.

Is there still rumours of Apple doing their own maps?

Glad to see credit is given to those who deserve it. I'm not sure if I can see Apple doing their own maps. I think it would be too much for them to update & maintain them, etc. Leave that to the map companies. I'm sure it's much cheaper to license the technology/maps as well rather then to start a whole service from scratch.

Given the sheer number of services in iOS and Apple apps these days, I bet there are dozens of things they didn't think of various stakeholders bring to their attention, most of which we never hear about or notice.

At least they try and deal with updates rapidly.

Um? That's...really somethin' maybe on a rainy day I will look at those credits and remember THIS IS OPENSTREETMAP. Eh? Just not feelin' it.
G

Hmm. All this mapping stuff is getting interesting. Hope a switch doesn't break the mapping API's in our apps!
B

I do not have a bunch to to say in reply, I only wanted to register to say fantastic work.cheapest wow gold
You must log in or register to reply here.
Share:
Facebook Twitter Reddit Email Link
Register on MacRumors! This sidebar will go away, and you'll see fewer ads.
Sign Up
Top Bottom