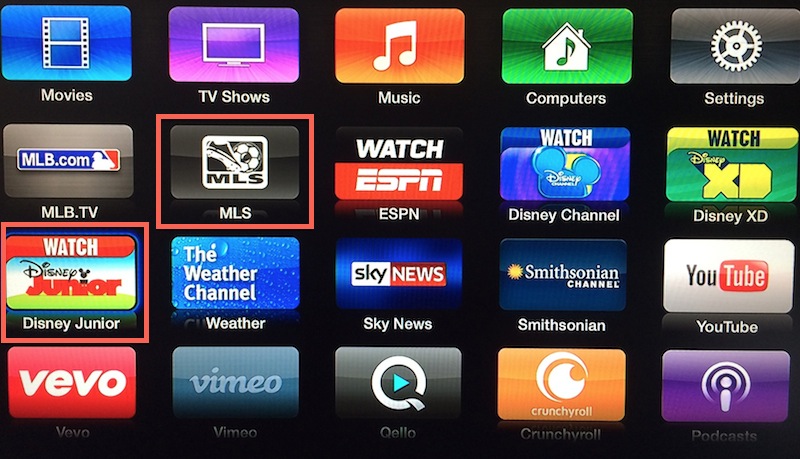 The MLS channel offers scores, standings, and video content from Major League Soccer, while also offering access to the MLS Live subscription program for live video of matches. MLS Live is priced at $24.99 for the season and a subscription can be used not only on the Apple TV but also on iPhone and iPad.

Today's additions are the latest in a long line of new channels introduced to the Apple TV in recent months. In June, WatchESPN, HBO GO, Sky News, Crunchyroll, and Quello were added, and last month Apple debuted channels for Vevo, the Smithsonian, and the first two Disney channels. Deals with TWC and The CW are also said to be in the works.

Always great to add more content, but I look forward to when I can pay a reasonable fee to Apple or another company for TV stations à la carte.

I'd rather have an EPL channel with all the cup matches as well.

I would buy that in a heart beat!

More than you know! ESPN is also owned by Disney.
H

If it could get NFL Sunday Ticket or Redzone, I'd buy one in a heartbeat and cancel my cable subscription.

Sunday Ticket then you're talking.

Maybe they can work something out with the NFL! I'd love to get Sunday Ticket on the Apple TV via subscription and not have to sign up for DirecTV

I wish half of this crap didn't require cable subscriptions. Why the heck can't I just pay Apple $20 a month or something and get access to all this stuff? They can divide the money appropriately based on how much of each channel I watch.

Apple wins, the networks win, and I win, by not having to pay for a bunch of other content I don't need as well.

But nooooo, the media conglomerates don't want to give up their outdated business models.

Apple - what about something useful to the rest of the world like BBC iPlayer ?

Nice! The AppleTV is becoming a nice little project. Unfortunately I think you still need Cable subscription to the channels (Disney, ESPN etc), but I can now add an AppleTV in my kids room without the need for an extra Cable box.

And I agree, EPL would be great!

Whats the point if you need a cable or satellite subscription?

Not that great for channels that require cable, and a cooperating provider, as well.

Netflix, Amazon Prime (not now and probably never available via Apple TV), and DVD sets provide more than we can consume here.

Well that's great, but since I do not have a participating cable provider I cannot enjoy most of the updates.

I just don't understand the restrictions?

Yes! I've been holding off on purchasing any of the MLS packages due to the inability to watch on the big screen. A welcome addition.

If they are going to keep adding apps like this, they need to provide a better way to manage them. I won't use most of the recent additions (I don't have a cable subscription and don't watch most professional sports), and the current means of hiding apps is more cumbersome than it needs to be.
L

My hope, more so than a theory, is that when Apple can get Congress to change the tax laws to let them repatriate their foreign earnings without such steep penalty, that they will buy out Disney (which includes ABC, ESPN, and full/partial ownership of a host of other media entities).

Then Disney TV will be Apple TV on the AppleTV.

Plexconnect still works for me.
L

blacktape242 said:
I'd rather have an EPL channel with all the cup matches as well.

I would buy that in a heart beat!

NBCSN has the EPL games (not the cup matches though) - that's on my "channels" wishlist, especially if can go individual channel subscription instead of "authorized cable provider".

Battlefield Fan said:
Whats the point if you need a cable or satellite subscription?
Click to expand...

talmy said:
Not that great for channels that require cable, and a cooperating provider, as well....
Click to expand...

I was wondering the same thing. Plus, if I have to pay my cable provider, why not just watch on cable? This way my wife won't clog my internet connection trying to watch one of these AppleTV channels while I upload/download media during collaborative work with my director. It seems redundant.

Apple need to work on an interface that works if you have a library of 400 TV shows, spanning multiple seasons and 1000s of shows and a Film library that also numbers in the 1000s

Not adding content that only US citizens care about !!