Apple and German company Carl Zeiss AG are working together on a pair of augmented reality smart glasses that could be announced as soon as this year, claims well-known blogger Robert Scoble in a Facebook post.

According to Scoble, a Zeiss employed allegedly confirmed the partnership between the two companies in a conversation that took place at the Consumer Electronics Show in Las Vegas, Nevada last week. 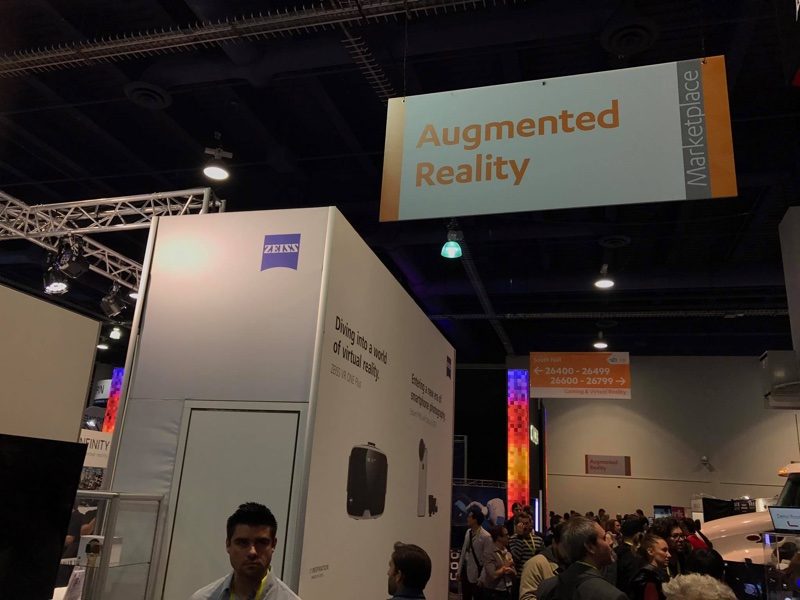 Zeiss' booth at CES. Image via Robert Scoble​
Scoble questioned the Zeiss employees at the show after noticing Zeiss had a booth in the augmented reality section of CES without showing off an augmented reality product. He believes Apple forced Zeiss to keep quiet about an upcoming release.

A Zeiss employee confirmed the rumors that Apple and Carl Zeiss AG are working on a light pair of augmented reality/mixed reality glasses that may be announced this year. (I thought it was next year but now that I saw this I believe it will happen this year).
Click to expand...

It's not clear how reliable Scoble's information is, but previous rumors have suggested Apple is working on a set of smart glasses that would connect wirelessly to the iPhone and display images and other information to the wearer.

Apple is said to have contacted suppliers about the project, which appears to be in the exploratory prototyping phase of development. While Scoble believes the glasses could be released in 2017, previous information points towards a 2018 or later release.

Apple has a full team dedicated to AR/VR research and exploring how the technologies can be incorporated into future products. Multiple times over the past year, Tim Cook has said that Apple has a deep interest in augmented reality. "AR can be really great. We have been and continue to invest a lot in this. We're high on AR in the long run," he said in July.

They're going to need to find something in the years ahead.
Reactions: dan110, saiz66 and duffman9000
B

Hmmm.... it seems unusual but if an employee really did confirm it then it could be possible. Despite his interest in AR, Tim Cook has said he thinks smart glasses are hard to do.

Personally the partnership with Energous, for true wireless charging, is more interesting to me right now.
Reactions: augustrushrox, Cameroncafe10a, the-oz-man and 4 others

Guess this guy was looking for another job anyway?
Reactions: iPadCary, Boatboy24 and Soccertess

Too bad they won't have any MBPs, Minis, or Mac Pros that can render high resolution VR content.
Reactions: iPadCary, raywin, likwidplastik and 33 others

The only thing the Macrumors forum hates more than Apple not innovating is when Apple is innovating.
Reactions: iPadCary, augustrushrox, Cameroncafe10a and 68 others
B

I'll believe when I see it. But for now, this is years out. Easily.
Reactions: iPadCary and sunwukong

This is what I come here to read. Obviously, Apple won't be the first to offer a product with augmented reality, but they have found success in markets they were late to in the past. Here's to cautiously hoping for another iPod, iPhone, iPad, or AirPods-esque unexpected hit.
Reactions: dBeats, cyb3rdud3, kuropju and 6 others

Last to the party isn't innovating.
Reactions: Niklas_nick, likwidplastik, tzm41 and 14 others

AirPods + AirGlasses seems to be the direction Apple could be going. Not virtual reality, but HUD style augmented reality basically like Google glass, but hopefully not as atrocious.

Apple will sell many frame sizes, styles & colors, and maybe the LCD/glass tech will allow a prescription to be programmed into them for basic vision correction.

Partly sarcastic side below:

And that's just hardware. Lets all hope for a good platform when this comes out.

And lets give Cook the oportunity to prove himself and his vision with this product category.
Reactions: LandRovers, lena and jeremiah256

Too late to the party.
Forgot to bring own beer.
Promises "big things".
Never delivers.

Tim's Apple has exactly become the kind of person I always tried to avoid during high school and college.

By that standard the iPhone nor the iPod were innovations and you've lost all credibity with anyone who utilizes common sense.
Reactions: EdBuk, dannys1, 0815 and 21 others
D

Or when they move the computer teams over to the AR teams to the detriment of the computers.
Reactions: tzm41, sunwukong, Lone Deranger and 3 others
S

Maybe one of the Apple employees on this forum can put a post-it up on his computer screen that Apple has a product called Mac Pro that they should update! Also, maybe put another that dongles are stupid

Could you imagine Tim's half ass attempt at a VR goggle?
Reactions: sunwukong and d0nK

This so concisely encapsulated these forums. Hat's off to you, sir.
Reactions: moetownslick, asterizk, DaveOP and 9 others

Too bad they probably wouldn't use iGlasses, but Apple Glasses.
Reactions: mdbradigan

Hope Apple VR and AR materilize soon...
They have been at it through their RD initiative for a long time. ( i know from decade old job listing)

I bought a Sony PS4 VR sys this holiday... its fantastic.. the frontier is ready for the consumer and the mainstream!
Everyone who has tried it just gets blown away by the experience ... to a point where they force me to take my whole system to evey party/gathering i go..
Everyone loves it.......Kids and Adults ! It wonderful and its just the beginning.

I hope Apple considers this as one of their priorities in their upcoming product lineup . Not just AR but VR and all derivatives.
Reactions: kuropju, GrumpyMom and fullauto

Does Apple truly believe AR is the future that the masses will embrace? Are they banking on some sort of distopian Trump world where we live underground wearing visors to escape reality? AR is cool for sure, but to invest so heavily in it seems like a reach.
Reactions: Lone Deranger
U

Appleaker said:
Hmmm.... it seems unusual but if an employee really did confirm it then it could be possible. Despite his interest in AR, Tim Cook has said he thinks smart glasses are hard to do.

Personally the partnership with Energous, for true wireless charging, is more interesting to me right now.
Click to expand...

Cook is the master of ambiguity and disinformation. Anything Apple is suspected of doing turns into a race to market for everybody else.