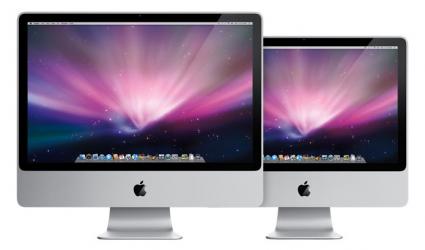 Apple today announced updates to its iMac and Mac mini desktop lines, including a 24-inch iMac and a Mac mini with new NVIDIA integrated graphics. For the same $1,499 price as the previous generation 20-inch iMac, the new 24-inch iMac delivers a 30 percent larger display, twice the memory and twice the storage. Apple also claims up to five times better graphics performance in the new Mac mini with the NVIDIA GeForce 9400M integrated graphics.."Our flagship 24-inch iMac with twice the memory and twice the storage is now available for just $1,499," said Tim Cook, Apple's COO. "The Mac mini is not only our most affordable Mac, it's also the world's most energy efficient desktop computer."

Apple also updated the AirPort Extreme Base Station and Time Capsule, which are now offering simultaneous 2.4 GHz and 5 GHz dual-band networking "for optimal performance, range and compatibility." The new models also offer the ability to set up a secondary Internet-only Wi-Fi network to allow family and friends to access the Internet without giving them the password to the primary network or allowing them access to networked drives and other peripherals. Finally, Time Capsule offers MobileMe members the ability to access files on their device's hard drive over the Internet from anywhere.
MacMall is offering $25-$100 rebates on new Mac minis and iMacs.

edit: Oh, arn was writing about the Mac Pros - see the next article up on the home page.

Just noticed on the UK store, what a nice surprise! I can't believe the Mac Mini finally has "New" by it's name!
Comment
I

£649 for the high-end mini? That is crazy pricing.
Comment
M

its way too overpriced for an "entry level" machine
Comment
M

How come you havent mentioned the new mac pros?
Comment

the store is back up check everything out guys
Comment

Glad to see new Minis. Once again $100 too expensive though.
Comment

Good update. The iMac updates are nice. If I cared for a desktop, I'd get an iMac. However, my Unibody MacBook serves me perfectly.
Comment
M

its way too overpriced for an "entry level" machine
Click to expand...

The best part of £1k for an entry level ready to go desktop (the mini doesn't count) really is just too much, especially in these times.

They will still sell, but it's a great shame the cost of entry isn't lower.
Comment
M

Nice to see them shipping straight away. I suppose a lot of the price hike in the uk is due to our weak currency.
Comment

I think the UK site has errors. Its asking me for an extra £800 to upgrade to 8gb ram.
Comment

Omg, the Mini is back on Dollar parity with the Euro.

So it is 100 Euro more than the old model
Comment

its way too overpriced for an "entry level" machine
Click to expand...

Yes, completely correct. The old iMac was £782... and now the 'new' one is £949? And it has shared graphics - no dedicated graphics!
Comment

Slices up the 'Humble Pie' for the nay-sayers!

Awesome news....about time the Mini got an update! Time to convince the wife to let me buy one now!
Comment

Pyrotechnic said:
I think the UK site has errors. Its asking me for an extra £800 to upgrade to 8gb ram.
Click to expand...