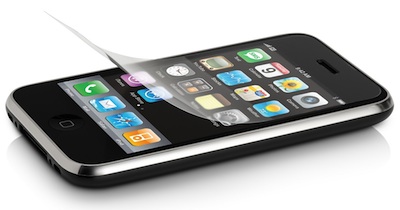 iLounge and Macworld are reporting that Apple has banned the sale of film-based screen protectors for its iPhone, iPod, and Mac lines in its retail stores.

In communications with vendors that have been ongoing for "some time now," according to one company, Apple has said that it will remove both film-only solutions from its stores, as well as any case or other accessory that includes film protection as part of its package, such as cases that include film screen protectors. According to sources, the ban will impact all forms of screen film, including completely clear film, anti-glare film, and mirrored film, regardless of whether the purpose of the film is protective, decorative, or both.
Click to expand...

The reason for the removal of film-based screen protectors is currently unknown, although speculation centers around the company looking to reduce the perception that such protectors are a necessity because the devices' screens are not sufficiently durable. Another theory involves high return rates for the products due to difficulties with blemishes and air bubbles introduced by users as they attempt to adhere the products to their devices.

Macworld claims that the ban even extends beyond screen protectors to include protectors and cushions designed to adhere to palm rest areas on Apple's notebook computers. Apple has yet to respond to either publication with comment on the reports.

This has to be one of Apple's stranger moves!
Comment

Well that's annoying. Seems like an example of Apple throwing a fit when a company makes a product to correct a potentially fatal problem with their devices (fragile screens).
Comment
J

Interesting, as they must make a lot of money from selling the protectors. Mine cost ~$12 from the store when i bought it and it must have been almost all profit.
Comment
W

My guess is that they are getting a lot of support calls regarding difficulty using the devices and finding that these are interfering with the multitouch working properly. My iPhone is less adept at picking up touches when a protector is on it.
Comment

I think I've only seen one of these put on that didn't have some kind of bubble under it - it was an Invisible Shield and was basically unnoticeable other than the reflection off the glass was a little different. I've even done them myself on my old iPod touch, and after THOROUGHLY cleaning the glass prior to installation, I still somehow apparently had dust or dirt on one spot and couldn't get the bubble out.
Comment

I honestly have had two iPhones now (original and 3G) and really haven't needed a screen protector on either of them. My current white 3G's glass face is barely scratched, and I can only tell when the display is off. The real problem is with the plastic backing.... it's cracked so badly now that I'm sure the resell value has dropped for it. I'd really like aluminum iPhones back, please....
Comment

I don't see the big deal. I find the screen to be highly durable. I didn't even know they sold screen protectors at their stores since I never had a need for one.
Comment

miles01110 said:
Well that's annoying. Seems like an example of Apple throwing a fit when a company makes a product to correct a potentially fatal problem with their devices (fragile screens).
Click to expand...

I have yet to have a scratch on my screen. My phone is almost two years old, and do not baby it, in fact I have dropped it a few times...
Comment
J

Eminemdrdre00 said:
Now Apple's pulling physical products without reason or explanation! When will this BS end?
Click to expand...

What BS? They're running a store and get to determine what product they do or do not carry. There are alternative places to purchase said product, so unless Apple starts denying warranty claims due to use of screen films, I fail to see a reason to get worked up over this.
Comment

these protectors are completely unnescessairy. I applaud Apple for this decision. Unless you have sapphire or diamonds hanging out in your pocket, your screen will not scratch from keys or other metal objects. If there is an impact of sufficient force to crack glass to begin with, there's not that much that a thin screen protector will do - the force of impact will likely be transferred to the glass anyway.
Comment

Apple's making it harder and harder for me to like them as a company. They make really stupid decisions.

Why ban screen protectors now...they've been in Apple stores for almost 3 years!
Comment

The screen is durable, to be sure, but the back scratches like crazy. I have a Bodyguardz full body protector (screen and back), for that purpose.
Comment
3

Good. I've used the films for years before but realized a) they don't actually protect anything b) they're a waste of money preying upon unfounded fears that without the film your screen will break c) it will save more trash from being unnecessarily discarded into landfills (you'd be surprised how much waste is consumed through not just the films but the packaging as well)


Beric said:
The screen is durable, to be sure, but the back scratches like crazy. I have a Bodyguardz full body protector, for that purpose.
Click to expand...

LOVE your avatar, too bad it can't be an animated gif lol
Comment

They're probably removing them because if you ever had a Genius replace your iPhone its almost impossible to remove and place the film onto a new phone. Therefore the typical donk American customer feels entitled to a new free film, especially if they purchased it at the Apple store in the first place. Apple retail probably doesn't want to deal with this every 10 mins an iPhone gets swapped for replacement.
Comment
D

I have an iPhone 3G that's about 20 months old. I wore a screen protector on it during the first year or so and then removed it after it got all gunked up. Months later and the screen remains scratch-less, which is just amazing. So it's probably not even needed really.

The rear black casing, however, has lots of small scratches on it (a case would have helped here, something else I've ditched since buying the phone to eliminate pocket-bulk).

Totally different than old-school Palm Pilots or Pocket PC's. Those NEEDED screen protectors, otherwise they would get scratched in a heartbeat.
Comment

actually, I think they are trying to draw a contrast with this:

I put one on my iPhone 3G more for reduction in the fingerprints than its anti-scratch function.

But it's worked perfectly for nearly 2 years with no bubbles.
Comment

Could this be a signal that Apple's moving toward Corning's Gorilla glass for this year's iPhone? Would be about time.

Does anyone know what they're using on the iPad?
Comment
N

miles01110 said:
Well that's annoying. Seems like an example of Apple throwing a fit when a company makes a product to correct a potentially fatal problem with their devices (fragile screens).
Click to expand...

Since when are the screens fragile? Until last week, my iPhone 3G went au natural with regards to the screen, with no scratches or damage despite consistent usage and typical wear and tear. I just put an anti-glare film on it just to reduce the visibility of finger prints.

The only time you see "fatal" damage to iPhone screens is when an obscene amount of pressure is applied to it, which usually happens when you sit on it or it gets crushed by something. As far as I know, every electronic device with an LCD screen has this same flaw. Definitely not a case of Apple covering up a flaw in their design. Unless they start using the newly introduced Gorilla glass (which itself isn't actually unbreakable, just more resistant), there really isn't anything they can do that others haven't already tried to make the screens less "fragile."
Comment
B

JC, Apple is the new evil empire for sure. I mean come on, you have a right to protect your investment. That glass screen is far from bullet proof.
Comment

I've tried two and they are a PITA to put on. I got air bubbles in both of them. So, I'm not really surprised Apple doesn't want to carry them in their stores anymore.

If you actually read the article it says:

"Multiple sources have told us that, because of the difficulty of applying such films and coverings without blemishes or air bubbles, these products are returned at a higher rate than many other products."


billystlyes said:
JC, Apple is the new evil empire for sure. I mean come on, you have a right to protect your investment. That glass screen is far from bullet proof.
Click to expand...

Oh please. You can still purchase them from their vendors directly --- like InvisibleShield at zagg.com, etc and OTHER RETAIL STORES. Every case/cell phone accessory kiosk at the mall sells them.
Comment

Not a big deal. Can still get them elsewhere. I'll be getting one for the iPad. I've got one on my iPhone too. I'm not very good at putting them on without bubbles! But at least it will look as good as new when I get the 4G (if I get it) and sell the 3G for a few pennies.
Comment
U

Eminemdrdre00 said:
Apple's making it harder and harder for me to like them as a company. They make really stupid decisions.

Why ban screen protectors now...they've been in Apple stores for almost 3 years!
Click to expand...