Apple yesterday updated its 3D "Flyover" map of London, adding animated images onto popular London-based attractions that result in real-time moving pictures right inside of the Maps app (via The Daily Mail).

The update causes the current time to be showcased on the face of Big Ben's clock tower, and the popular giant London Eye to constantly rotate when users find each structure in the London Flyover map. The feature, according to The Daily Mail, is expected to hit other big cities "within weeks."

Though a straightforward and purely aesthetic update, the addition of real-time animated effects in the Maps app brings a more immersive experience to Apple's mobile map service and could give it a slight edge on competing map apps. 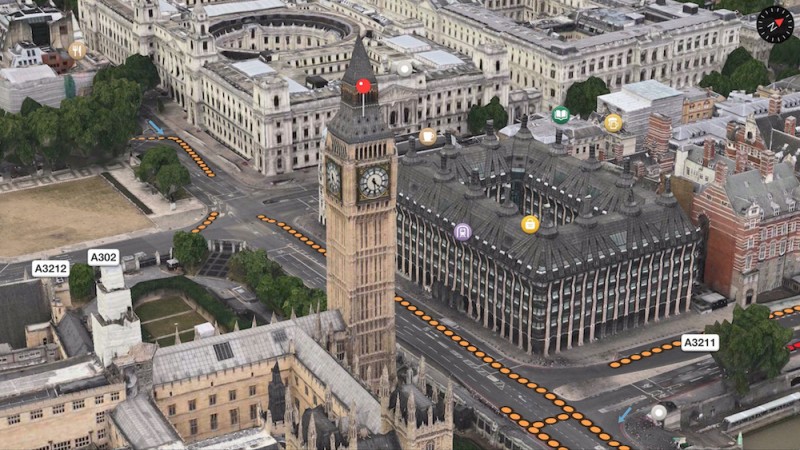 Thanks to hefty amount of criticism following the rocky launch of Maps, even resulting in a public letter of apology by Tim Cook, Apple has been steadily attempting to straighten the app's course and win back the users that migrated to services like Google Maps in the intervening years.

Apple has steadily improved the accuracy of its maps, increased the number of points of interest displayed, and improved the quality of its Flyover imagery, while also reportedly working to add new features such as transit directions and indoor mapping information. Apple-leased minivans with equipment rigs on top have also been seen in a number of U.S. cities in recent months, suggesting the company may be collecting street-level imagery to compete with Google's Street View.

Nice to see Apple finally putting resources into Maps outside of the US...
Comment

Coming soon to a Google Map near you...

It will be no time until some copycats will also get it.

Apple: Next step is X-Ray view of the street!
Comment
N

What about actually improving accuracy of maps and POI? (Especially in developing countries where Google is miles ahead)
Comment

I can't wait to see the animated Mt Rushmore!
Comment

I for one have been using Apple maps since it first came out with out any problems.

Don't get me wrong, I think this is a really cool feature, especially if it can be done on a large scale. However, I think that Apple needs to increase the transparency for people submitting reports with map issues.

I've submitted my address having an issue for two years. Let's focus more on responding to and adopting customer issues/suggestions for map data, then release the real-time animations!
Comment

AMDeeb said:
What about actually improving accuracy of maps and POI? (Especially in developing countries where Google is miles ahead)
Click to expand...

They are and have been updating the accuracy of maps and POI.
Comment
J

I agree. Cute, but useless.

I'd argue this is similar to the whole skeuomorphism business. Except skeuomorphism could, arguably, be useful and help the end user in better understanding the interface.
Comment
T

KdParker said:
I for one have been using Apple maps since it first came out with out any problems.

So this is a nice addition
Click to expand...

I'm near problem free with Apple Maps, except for my home address. It's still not picking it up properly. (It will redirect you to a different street in a nearby town instead of our house...) which makes it frustrating to give friends directions.
Comment
P

I would be much more impressed if when I entered '123 Main Street', it didn't assume I meant the one across the country instead of the one 3km away.

Or if it could somewhat intelligently autocorrect '123 Mai Street' to '123 Main Street' instead of the unhelpful no-such-address error.
Comment
M

KdParker said:
I for one have been using Apple maps since it first came out with out any problems.
Click to expand...

Well thats what I always loved Apple for, the attention to detail and I like to see that they are still looking for the small things again.

Many guys here will probably think its useless or Apple should focus on their wifi or (fill your problem) - but dont worry guys there are sure people at apple looking at your problems.

Just throwing more manpower on many problems doesnt help to solve it.
Comment

I love the UI and usability of Apple Maps, however, POI data stink! Therefore, I only use Google Maps because Apple Maps is wildly inaccurate.
Comment
H

London eye is rotating rather too quickly methinks.
Comment

NMBob said:
About as useful as emoticons.
Click to expand...

This is exactly the kind of showy-but-useless nonsense that has made Apple Maps a laughing stock for so long!

How about concentrating on actually improving the quality and functionality of the maps themselves, in ways that are actually useful for someone navigating around a city like London?

Or the even just improving the quality of the satellite/aerial images - which in the UK, when not in 3D mode, are pretty ugly and terrible.
Comment
R