Apple today issued invitations for its upcoming iPhone 6 event on September 9, which is also said to include its much-anticipated wearable device. According to the invitations, Apple is planning to host the event at the Flint Center for the Performing Arts at De Anza College in Cupertino, the same location where Steve Jobs introduced the original Mac 30 years ago.

For the occasion, it appears that Apple has been building a massive structure on the campus, which has been kept under tight wraps with a white barricade. A MacRumors reader has sent in images of a mysterious structure at the Flint Center, which appears to span three stories and is protected by "scads" of security people. Administrators had previously declined to comment on what the structure is for, stating only "We are not at liberty to discuss that due to client wishes." 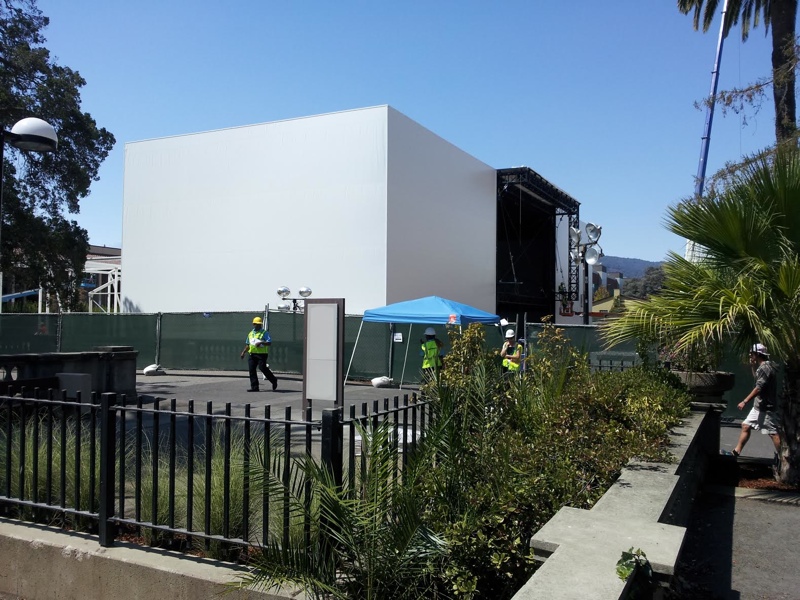 Image of mysterious structure taken on August 20​
​
Apple has not held an event at the Flint Center in many years, so the company's return to the site of the original Mac unveiling suggests its upcoming announcement will be a major one. The Flint Center has a much higher seating capacity than other venues where Apple has unveiled products in the past, including the Yerba Buena Center and its own Cupertino campus.

Earlier this year, Apple iTunes chief Eddy Cue said that Apple's got the "best product pipeline" he'd seen in his 25 years at the company in the works, and Tim Cook promised "really great stuff" in new product categories.

Despite the cryptic "Wish we could say more" message on the media invitations, rumors have suggested Apple is planning to unveil both the iPhone 6 and a new wearable device at the September 9 event.

It is unknown whether Apple has plans to broadcast the event on the web and Apple TV as it has done for recent events, but MacRumors will provide live coverage both on MacRumors.com and through the MacRumorsLive Twitter account.

This event is going to be EPIC!

I just soiled my pants. The front and back.
B

wow, that is actually a great idea ... that would be great if they did that.

Perfect situation for my drone. Fly in, take some pics, fly out.
S

The hype is real!!
Z

How freaking amazing would that be!

Either way, the symbolizing of this venue is enormous. This is going to be the most important Apple event in a long time.
M

Where Steve showed the Mac 30 years ago!? Damn, the hype just increases. It's insane, I'm pumped!!!
U

People in the Cupertino area, fire up your drones!
R

It isn't going to be a fake home. The rumors massively underestimated how large the screen on the new iPhone is going to be. Current estimate is 4032 inches.

Aside from the new iPhone and possible iWatch (both of which I'm ecstatic for), I'd like to see:
But who knows what this crazy structure could be!
M

Considering this is the venue where Steve Jobs showed off the Mac for the first time 30 years ago, the significance of this event is quite huge. Almost certainly backs the existence of a new product pipeline. (Wearable maybe?..)

Wow didn't remember that history about the flint center. This is going to be insane.
A

Crazy, so Apple is going to add structures like this to their product lineup?

Wonder how much they'll cost. iBuilding.

Perhaps Cook is about to finally silence his doubters...
R

I wonder if they'll present the keynote as a musical? That would be different.
A

This is going to be big! The normal venue for iPhone keynote is the Yerba Buena Center which holds about 750. This place holds over 2500!

rickdollar said:
I wonder if they'll present the keynote as a musical? That would be different.
Click to expand...

No that would be Samsung.

This is what I want to see. can't wait this is looking like something more epic than just another iPhone. Maybe the elusive Apple TV may show up too??? Is it September 9th yet?????
B