To celebrate the debut of the original Macintosh 30 years ago today, Apple has posted a tribute on the homepage of its website, and has also created a special "Thirty Years of Mac" section accompanied by a new "Mac 30" video looking at the past and present of its signature desktop computer. 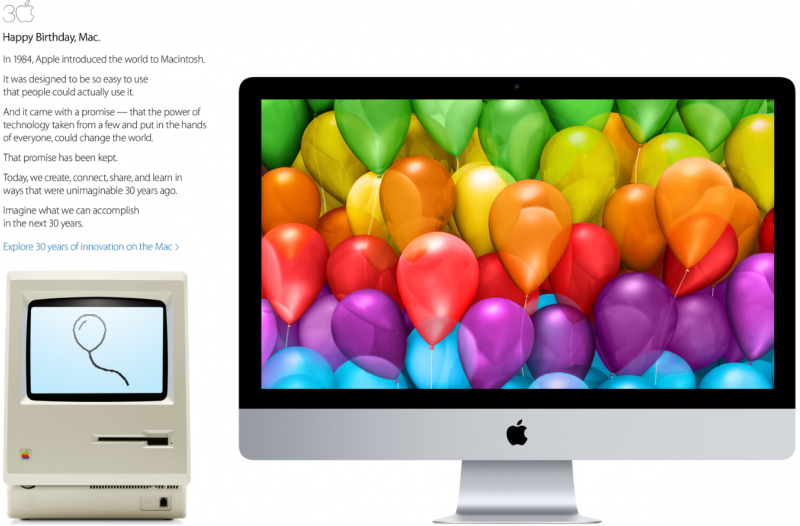 In 1984, Apple introduced the world to Macintosh.

It was designed to be so easy to use that people could actually use it.

And it came with a promise -- that the power of technology taken from a few and put in the hands of everyone, could change the world.

That promise has been kept.

Imagine what we can accomplish in the next 30 years.
Click to expand...

The special "30 Years" section of Apple's website allows users to scroll through a visual timeline of the Macintosh's history, beginning with the first Mac in 1984 all the way to the recently released Mac Pro. Each page in the timeline is introduced by a passage on the Mac's impact on an individual or entity, such as the Macintosh II's role in the creation of computational program Mathematica by Theodore Gray or the role the MacBook Pro played in helping create online coding tutorial platform Codecademy. 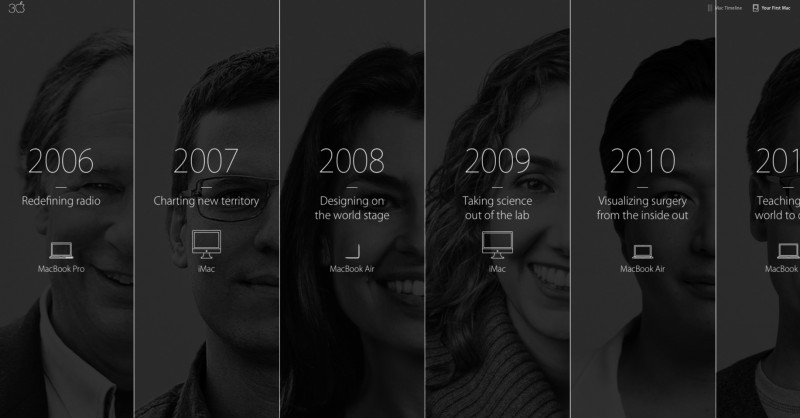 Pages in the visual timeline also include retrospective information on every Macintosh with photos, and are also followed by research about the most popular uses for a particular Mac. Apple also includes a page for users to input data about their first Mac, which asks questions about location and ownership. The data given by users can be found on another section that gives a visual look at what models were chosen by people as their first Mac, with live updating information. 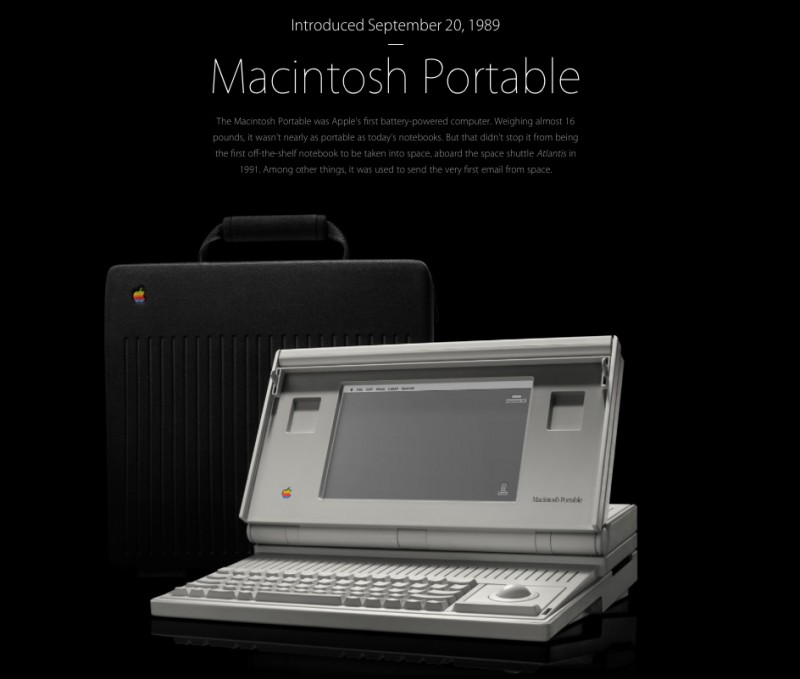 Meanwhile, the Mac 30 video on the website includes remarks about the Macintosh by notable individuals such as music composer Hans Zimmer and designer Iris van Herpen, and also features a visual look of the computer's impact in various industries.

In addition to the festivities on Apple's website, three Apple executives spoke to MacWorld about the Macintosh's illustrious history, which will be followed by ABC News airing an interview tonight with Apple CEO Tim Cook about the computer's thirtieth anniversary. Jonathan Zufi, author of the coffee table book "Iconic: A Photographic Tribute to Apple Innovation," also created a new website that includes photos of macintosh computers and portables from Apple's early years.

At first I thought Apple released a new display!

But this is also nice.
M

Imagine what we can accomplish in the next 30 years.
Click to expand...

Let me guess... perhaps finally reach 4 GB of RAM on the iPhone/iPad?

great designs!! from the web design to the photography of the mac.
happy 30th year mac!!

Happy birthday, Mac! What an excellent tribute and history Apple have done on their website. Love all the press they are doing around the Mac as well. Just goes to show how much Apple still respects the Macintosh even though it isn't really the core of their profits anymore.

They did an amazing job with the design of the homepage.

Happy Anniversary Macintosh! Looking forward to what you'll do in the next 30!
S

You know it would be really nice if this thread could be kept snark-free.

iBug2 said:
They did an amazing job with the design of the homepage.
Click to expand...

Yep, really great. I was hoping they would do something like this.
A

That 1984 commercial is full of irony now.

Steve Jobs was a true genius.

I was in Junior High in 89 with a Mac II and a 2400 baud modem. Sure BBSs were around but the Internet? The only way we had access to the real internet(not CompuServe or other service) in the state at that time was dial-up to the University running usenet(not gopher) and elm(I think) on a Vax.
Last edited: Jan 24, 2014

It's actually sort of jarring to see Apple's older products in the context of their newer website and animations. What an awesome homage!

Well as a musician who wanted to record al by himself, I'm old enough to remember there WAS an alternative, named Atari. But after the Atari Falcon debacle most musicians jumped on the Apple wagon. My first Apple computer being a Macintosh Performa, then G3, Powermac G5, old Mac Pro, and who knows the new Mac Pro this year.

All in all when looking back it has been truly a revolution where we are today and the way Apple has contributed being able to do what I do today. Looking forward for the next 30 years
O

You can also see how the impact of Steve Jobs slowly disappears through the nineties, and how it suddenly makes a comeback with the iMac.
Z

iBug2 said:
They did an amazing job with the design of the homepage.
Click to expand...

You mean with the text embedded as a graphic? o.0

I actually think this is a bit well, not what Steve Would Do©

An incredible 30 years. They really put a lot of effort into that website.

Seems to me that Macs are getting more love than iOS devices at the moment! Keep rocking, Mac!

Rogifan said:
You know it would be really nice if this thread could be kept snark-free.
Click to expand...

I have to go to storage and see if my really old one is still there. I can duplicate the homepage image!!!

Zeldain said:
You mean with the text embedded as a graphic? o.0

I actually think this is a bit well, not what Steve Would Do©
Click to expand...

Come on Zeldain, there's a time and a place for these comments. On a thread celebrating the 30th anniversary of the Mac? Probably not the best one.

We're (mostly) all Apple users here for one reason or another. Let's embrace the good for once, and drop the pessimism for a day.

Why do the F and I in FIRST have a connecting line?

It's a touchscreen cMBP ^^
You must log in or register to reply here.

Apple Silicon and the return of the Macintosh Server?