Apple CEO Tim Cook will appear on CNBC's "Mad Money" show this evening, where he will speak with host Jim Cramer, and ahead of the interview, CNBC has shared some of what was discussed.

The topic was, of course, Apple's recent guidance downgrade, where Cook said that factors like poor sales in China, a strong U.S. dollar, and cheap battery replacements impacted Q1 2019 earnings. 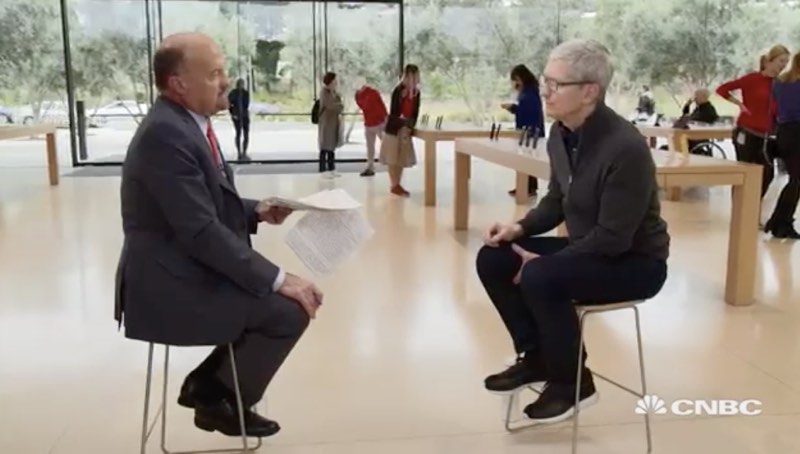 According to Cook, Apple's ecosystem of devices and services is "probably underappreciated" by naysayers, which is something that he's heard over and over again over the years.

"I'm not defensive on it. This is America and you can say what you want," Cook continued. "But ... my honest opinion is that there is a culture of innovation in Apple and that culture of innovation combined with these incredible, loyal customers, happy customers, this ecosystem, this virtuous ecosystem, is something that is probably underappreciated."
Click to expand...

Cook went on to say that he wasn't surprised at the drop in Apple stock following the news, because the market is "quite emotional in the short term." Cook says that Apple "looks through all of that" and focuses more on the longer term.

***TONIGHT*** Wall Street has taken a bite out of $AAPL's stock, but CEO @Tim_Cook tells @JimCramer that "@Apple's health is better than ever" - Don't miss this exclusive sit down covering everything from China to fighting off the naysayers pic.twitter.com/grDJwJqQKv - Mad Money On CNBC (@MadMoneyOnCNBC) January 8, 2019
Click to expand...

Products should always be better each iteration, but that doesn’t mean they are enticing.
Reactions: RandomDSdevel, VMMan, bigboyz12000 and 7 others

I don't know too many CEO's that go on record saying business is down even when business is down. With that being said, I can appreciate some of his remarks. Yet, the iPhone is getting heavier and more expensive by the year. I just want an affordable, sexy, awesome phone that does not cost a monthly mortgage payment hehe.
Reactions: CooKieMoNs7eR, Yogosans14, Peperino and 16 others

Apple will be fine, but you can't really tell that by that empty ass store in the picture. I'd love for either of our Apple stores to EVER be anywhere close to this empty. lol.
Reactions: oneteam

Not to come off too negative, but I never bother watching these "interviews." Just about as scripted as their keynotes, though they get another opportunity to promote whatever political / SJW trending topic.
Reactions: scrapesleon, sarevok, bigboyz12000 and 35 others

He forgot saying Apple’s product prices have never been cheaper.
Reactions: VMMan, slide_to_unlock, sarevok and 39 others

“Culture of innovation”? Just stop Tim. You haven’t given a DAMN about innovating anything in years. You’ve been coasting on your predecossor’s legacy and it’s showing.

There was a time when Apple’s products stood for themselves but more and more Tim you’ve been sending your minions out to do damage control. The sooner you are removed from Apple the better off the company will be.
Last edited: Jan 8, 2019
Reactions: RandomDSdevel, Elgaard, VMMan and 49 others
P

like tim said "This is America and you can say what you want" so he can say whatever he wants but the numbers and stats don't lie. they are not better.
Reactions: RandomDSdevel, Peperino, Oblivious.Robot and 10 others

Why doesnt any 'brave' journalist ask if Tim thinks the pricing model is whack as hell?

I think watching paint dry is more exciting than watching Tim speak in hyperbolic terms and gaze off in the distance.
Last edited: Jan 8, 2019
Reactions: RandomDSdevel, VMMan, clauzzz203 and 52 others

This is all I think when I hear a CEO talking about how great their company is doing.
https://i.imgur.com/si4kn8q.gif

Apple made it through the 2000-2003 downturn without any cost-cutting layoffs, because SJ cared deeply about that. We will know how sick Apple truly is when they have a layoff.
Reactions: RandomDSdevel, Oblivious.Robot, nt5672 and 3 others

cocky jeremy said:
Apple will be fine, but you can't really tell that by that empty ass store in the picture. I'd love for either of our Apple stores to EVER be anywhere close to this empty. lol.
Click to expand...

Its quite something to think that they have an entire Apple Store just to be a set for TV interviews.

He always says that. Won’t even bother to read.
Last edited: Jan 9, 2019
Reactions: clauzzz203, terryzx, Mr Todhunter and 3 others
H

These TV interviews that Cook comes out and does every so often to defend the company for one reason or another feels exactly like Theresa May coming out every couple of weeks to say the exact same crap while everyone knows Brexit is happening in the background and it's going to be a disaster. It would be best if he, and her just shut up and listed to what people are saying and act on it.

They both have the leadership of a supply teacher in high school. Placeholders, nothing more.
Reactions: imageWIS, Peperino, Oblivious.Robot and 14 others

It's pretty hard to think long-term if Apple is so secretive. Not that sharing all their plans is a good idea, but I get why people wouldn't believe him. What's next after iPhone? When is AirPower coming? Nobody knows.
Reactions: RandomDSdevel, Mr Todhunter, rbrian and 2 others

Of course he's going to say that.
Reactions: clauzzz203
S

Apple's stock is valued like a blue chip, so when revenues go down the stock drops. It's all about what Apple can provide now, rather than what they might do in the future. Rather than being truly innovative, they can find new ways to remain a steady blue chip (like "services" which is just a copy of many other companies' existing businesses).

If investors thought Apple were innovative, the P/E ratio would have been far higher even before the recent news.
Reactions: RandomDSdevel, clauzzz203, AlumaMac and 1 other person

But his “never been better” and “never been stronger” reeks of as much condescension as their continued raising prices and lacking innovation. And I say this as an Apple shareholder.
Reactions: RandomDSdevel, Peperino, Mr Todhunter and 7 others

ALL I want to know is if the AAPL Board has asked Cook to RE-sign ???

ALL the signs (for a Mgmt change) are there !
Reactions: scrapesleon, VMMan, clauzzz203 and 9 others

Spin as fast as you can, Cookie.
Reactions: VMMan, clauzzz203, Hank Carter and 6 others

[never : not in any degree : not under any condition]​
Tone down the superlatives and get back to letting the products to speak for themselves.
Good outcomes will follow.

The year after year higher premium prices for their phones are starting to slow down their sales. I love their products but the majority of the people cannot or just will not upgrade every year or even every other year. My iPhone x is still like a new phone and I have no intention of buying a new one any time soon.
Reactions: RandomDSdevel, imageWIS, Oblivious.Robot and 4 others
You must log in or register to reply here.
Share:
Facebook Twitter Reddit Email Share Link
Register on MacRumors! This sidebar will go away, and you'll see fewer ads.
Sign Up
Top Bottom