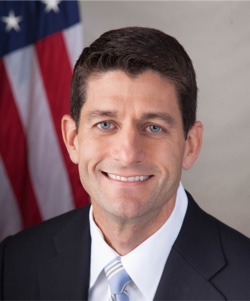 Apple CEO Tim Cook plans to co-host a fundraiser for House Speaker Paul Ryan next week in an attempt to strengthen Apple's relationship with key Republicans, reports Politico. The announcement comes following news Apple has decided not to donate money and Apple products to the Republican National Convention, reportedly because of comments made by presumptive nominee Donald Trump.

Cook and Ryan will host a private breakfast on Tuesday, June 28 in Menlo Park alongside longtime Apple treasurer Gary Wipfler. Money raised will benefit Ryan and a fundraising committee that helps elect other House Republicans. Invitations were sent out today, and Politico was able to obtain one.

Cook is hosting the fundraiser on his own accord, as Apple does not have a corporate political action committee like Facebook, Google and other tech giants in Silicon Valley. Still, the move reflects Apple's desire to court Republican and Democratic officeholders alike, even at a time when it has serious reservations about Trump, the GOP's presumptive presidential nominee.
Click to expand...

Over the weekend, Apple told Republican leaders it would not donate resources to the convention due to Trump's comments on women, immigrants, and minorities, despite having traditionally made donations to both the Republican and Democratic conventions.

HP has also announced that it will not provide funding, but Facebook, Google, and Microsoft have all agreed to provide support to the upcoming event. It is not clear if Apple will donate to the Democratic convention.

As Politico points out, Cook has made an effort to bolster relationships with both Democrats and Republicans in the past, with donations to Senators and Representatives from each party.

why are you hiding this on the side bar instead of front page. the political fireworks would be a fun watch
Reactions: ToroidalZeus, AdonisSMU and tosca001
Comment
B

For Tim Cook, money "trumps" social causes every time. I don't mind it really, it's what most business people do. I do, however, wish that the whole social issue PR campaign that is driven by Apple was less fake. It's just too obvious when they are doing things to appease the hipsters, eco lovers etc.
Reactions: S G, Dekema2, augustrushrox and 12 others
Comment

Here's your chance to be negative MR. Bat her out of the park now.
Comment

Oh great, just what we need in this country, more Crony Socialism...

You know, there was a time when Apple didn't lobby at all...

What's wrong with Trump? Let's make America racist again! BTW I'm not republican but Paul Ryan might be some day attract my vote...anyways I'm not from Wisconsin.
Reactions: AgentAnonymous, PowerBook-G5 and JPark
Comment

Stay out of politics with our monetary support. I buy Apple products not Apple endorsements for whatever cause that Apple is NOT REALLY committed to. Hmm, 140+ countries where Apple sells products. I don't see them boycotting the Socialists or the world politicians with Human Rights violations do they??? Politics ONLY when convenient and not in the way of opening doors in China, et. all is not REALLY political stand to begin with.
Reactions: Boatboy24, WWPD, Dekema2 and 9 others
Comment
J

Tim Cook need to exit Apple and pursue his dream to become a famous politician!
Reactions: WWPD, Patron_Saint, Dekema2 and 12 others
Comment

Can we just keep money out of politics?
Reactions: yashrg, S G, SimonTheSoundMa and 12 others
Comment

Ugh, looks like I may need to build a Hackintosh instead of waiting for a new Mini. I guess the dumbing down of macOS finally makes sense in light of Cook's intention to reach out to republicans.
Reactions: AgentAnonymous, Sandstorm, Uunnkknnoowwnn and 2 others
Comment
K

It's smart business to court both parties. Political affiliation should be an individual decision; even for CEOs.
Reactions: Gasu E.
Comment

And this is called a democracy, oh the hypocrisy.
Money is king in the states.
Reactions: ILikeAllOS and Benjamin Frost
Comment
B

Tim just want's to bring his cash back to America without some outlandish tax applied to it.
Reactions: Uunnkknnoowwnn, nikster0029, tosca001 and 1 other person
Comment

I think that is the side that doesn't believe in climate change....but I may be wrong.....
Reactions: AgentAnonymous, Sandstorm, SusanK and 3 others
Comment

justperry said:
And this is called a democracy, oh the hypocrisy.
Money is king in the states.
Click to expand...

"[It's called] a republic, if [we] can keep it."
-- Benjamin Franklin
Reactions: phillipduran, augustrushrox, Deelron and 2 others
Comment

This coming on the heels of Saturday's non-donation statement by Apple is obviously a clear snub of Trump.....
Reactions: AgentAnonymous and ToroidalZeus
Comment

dannyyankou said:
Can we just keep money out of politics?
Click to expand...

The supreme court decided that big bucks should have more weight than anyone's vote. Our political system have become a complete sham.
Reactions: S G, Ezlivin, tosca001 and 2 others
Comment

It's gonna be hard to make him lighter with all that hot air and all.
Reactions: ouimetnick
Comment
M

Mac Fly (film) said:
Here's your chance to be negative MR. Bat her out of the park now.
Click to expand...