In case there were any doubts that Apple was exploring the use of advanced multitouch gestures under Mac OS X, a recent Apple patent application authored by Wayne Westerman (of Fingerworks) shows mockups of a Mac OS X gesturing control panel with options to configure standard trackpad, basic multitouch, and advanced multitouch settings:

Apple's notebooks already contain what we presume to be "basic multitouch" with two-finger scroll, rotate, and zoom, but "advanced multitouch" has not yet been seen in shipping products.

The patent application depicts how one could customize these advanced gestures for Expose and Dashboard, by using four finger swipes up/down/left/right: 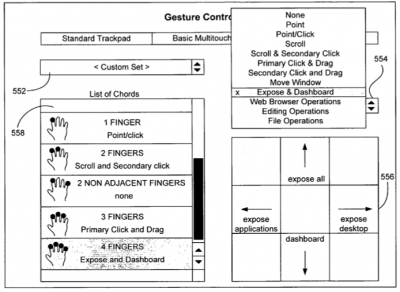 File operations, such as Open, New, Save and Close using gestures based on your Thumb and Forefinger: 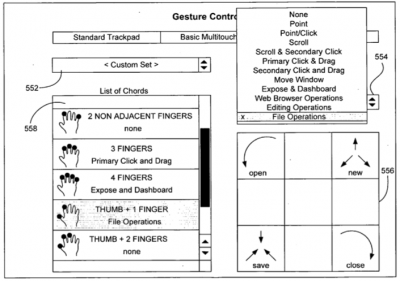 And even editing operations such as Copy, Cut, Paste, Undo, Select All, Tab, and Cancel using gestures based on your Thumb and Two Fingers: 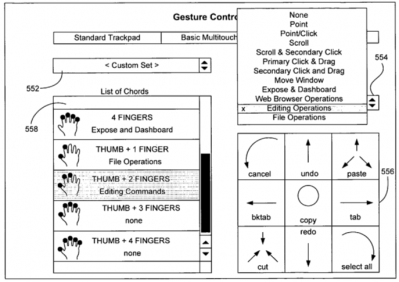 They also claim to be able to distinguish between various combinations of fingers, including adjacent and non-adjacent finger presses. In particular, they point out that the pinky finger when applied sideways to the trackpad (as in the bottom of a fist) generates a unique pattern and could be used for its own customizable functionality: such as adjusting volume or putting the computer to sleep.

Over the past few years, numerous multitouch patent applications have been revealed Apple's ongoing work on gesture computing. Apple has been making small and steady steps at introducing the multitouch interface -- first in the iPhone, and now in the MacBook Air. Apple is expected to expand this multitouch trackpad to the remainder of their notebook product line.

This is quite impressive. Looking forward to multi-touch on the new MacBook Pros. Perhaps, even the next generation Mighty Mouse will incorporate Multi-Touch capabilities.

I'm saving up RIGHT NOW for a Macbook Pro.
T

The mouse is slowly becoming obsolete...

I imagine this will speed things up further still. But to learn EVERY gesture? Seems like a hobby more than a functional premise.
Z

Well, here's to hoping, but I won't be able to enjoy any of these features on my current setup, unfortunately.
W

cool news. If the MBP get updated tomorrow or whenever they do, they'll probably have it.
C

The mouse is going to see so archaic in a couple of years.

I sit around 20 hours a day working on my computer (or so it feels), and my gut is paying the price. I welcome a little more physical movement in my computer usage.

So I take it the MBA and new MBPs should get this eventually as a update one day?
D

Great, so we are finally getting cut & paste then?

i thought tablets were going to be the next big thing, but i guess there still a ways off to becoming the norm.
S

They got us hooked with iPhone and MBAir.

Now is where the fun begins.

File operations and edit operations are very intriguing. I could really speed up my workflow by not having to move my fingers off the trackpad or mouse around for menus.
L

It would be cool to have this option for desktops too... New Apple keyboards, anyone?
M

Perhaps the next patent application we will see will be a way to infuse all of these gestures into your memory...
B

There are some people in the world who don't have all of their fingers, or because of other issues don't have the dexterity or the control necessary to manipulate a system like this. While yes, the population that falls into this category is in the minority, we should all be aware of accessibility issues when creating computer interfaces.
R

Alas for the tablet hopefuls. I think we can safely assume that Apple is going to focus on its touchbased computing through the trackpad and its portable devices for the time being. We may get a UMPC (Newton II or whatever) but not a Mac touch.

I still think there will someday be a Mac tablet, but it doesn't look like it will be 2008.

Looks like I am gonna be getting the HP TX2000 for my tablet/portable computing needs.

I wonder if the next step for the desktop will be multi-touch versions of pads like the Wacom tablet things. That would be really awesome to have an 8" x 6" trackpad with support for laptop-style tracking with a finger, multitouch gestures, and high-precision + pressure-support with a stylus. That would be a great tool. I'd like to see those devices get a little more down to earth.
M

Lol, I just barely made this then I looked at the home page and saw this article

MacFly123 said:
Lol, I just barely made this then I looked at the home page and saw this article
Click to expand...

eww.. that macbook pro is ugly..

Bentov said:
There are some people in the world who don't have all of their fingers, or because of other issues don't have the dexterity or the control necessary to manipulate a system like this. While yes, the population that falls into this category is in the minority, we should all be aware of accessibility issues when creating computer interfaces.
Click to expand...

true, but we don't all forego monitors because some people are blind. We just work on other tools that allow them to take advantage of computers in a different way. Same sort of thing here, I think. Multitouch is great, though, for accessibility. If you only have a few fingers on your hand, you can configure the thing to only support gestures you are able to perform. For some reason my intuition is that a trackpad might be better than a mouse for people with accessibility issues. But maybe I am way wrong


MacFly123 said:
Lol, I just barely made this then I looked at the home page and saw this article
Click to expand...

You know what they say... it's all fun and games till you close the laptop too hard and the glass shatters...
P

I love the way it would let you choose "Standard Trackpad", "Basic Multi-Touch", and "Advanced Multi-Touch. That will make it a LOT less intimidating. Apple rules I can't wait to see how they tackle this for desktops
M

DMann said:
This is quite impressive. Looking forward to multi-touch on the new MacBook Pros. Perhaps, even the next generation Mighty Mouse will incorporate Multi-Touch capabilities.
Click to expand...

I really think it will. I do not see them doing touch displays on either the laptops or desktops at all. If they do it probably will only be on one specific product and not for several years.

looks sorts confusing. And why do we need copy/paste gestures? Isn't command c and v on the keyboard efficient enough?