Yesterday, it was discovered that a Mac App Store app called Calendar 2 had implemented a cryptocurrency mining feature that users could elect to use to unlock in-app features rather than paying cash, raising questions about whether Apple planned to allow such apps in the Mac App Store.

Calendar 2 was mining a digital coin known as Monero, and initially, Apple was slow to respond to questions from Ars Technica about whether or not such a feature was permissible, resulting in the app staying in the Mac App Store for a good 24 hours after Apple knew of its existence. Shortly after widespread media reports about the cryptocurrency mining feature circulated the app disappeared from the Mac App Store, but at the time, it was not clear if it was Apple that removed the app or the app's developer. 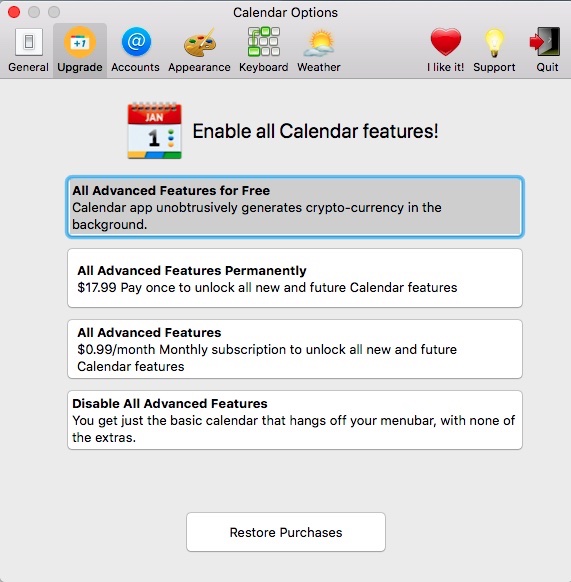 As it turns out, the app was indeed pulled by Apple. According to Greg Magarshak, CEO of Qbix, the company behind the Calendar 2 app, Apple removed the app from the Mac App Store for violating rule 2.4.2, which states that apps should not put an unnecessary strain on device resources.

Design your app to use power efficiently. Apps should not rapidly drain battery, generate excessive heat, or put unnecessary strain on device resources.
Click to expand...

The Calendar 2 app was supposed to be using currency mining as an opt-in feature, but it was riddled with bugs causing the mining feature to use excessive resources and run regardless of whether or not users opted in, which is what drew so much attention to it. Just before the app was pulled from the Mac App Store by Apple, Magarshak promised to remove the feature from future versions of Calendar 2 because of these issues.

As of today, the Calendar 2 app is back in the Mac App Store. Magarshak said on Twitter that he worked with Apple to get a new version of the app released that has no mining features. As an apology for the snafu, all Calendar 2 users, new and old, will be provided with upgraded features for free for a year following the app's next update. Calendar 2 uses should update immediately as the older version of the app continues to include the miner.

1st of all lets give credit where due: an hour after we updated Ars about removing the mining feature, Apple removed our app citing 2.4.2 &amp;worked w us to put it back on the store. New release has NO mining and we are giving all old&amp;new Calendar users ALL features free for a YEAR. - Qbix Apps (@QbixApps) March 13, 2018
Click to expand...

Magarshak tells MacRumors that Calendar 2 brought in approximately $2,000 from mining Monero, and the company says the funds will be used "towards improving features for our users going forward."

Apple wants their 30%. No way they can get it if you're using cryptocurrency mining in lieu of the Apple advertising platform.
Reactions: numberfour, macfacts and Delgibbons
Comment

Well, iAd is dead and other ad platforms are prevalent so... probably not the reason.
Reactions: Goatllama, AdonisSMU and daveheinzel
Comment
B

Apple doesnt want thei customers’ devices being used as mining devices or even the IDEA that it is OK. Shocked as you may be, this is peanuts for Apple. There are situations they ACTUALLY look out for their customers, even if it’s self serving in the end.
Reactions: Goatllama, Gasu E., LinusR and 16 others
Comment
C

Apple simply doesn't want consumers to complain their Macs are running slow due to an app using resources for mining bitcoin. Plus the possible ethical issue of mining. Simple. No hidden agenda.

And what advertising platform are you talking about??? iAd was discontinued years ago.
Reactions: Goatllama, Dorje Sylas, Gasu E. and 5 others
Comment
W

When are they going to pull Angry Birds?
Comment
D

In before all those tinfoil comments that this is a conspiracy to advertise the Calendar app and/or distrust cryptocurrency!!! OMG!!! /s
Reactions: Goatllama and charlesdayton
Comment

Let's be honest, it was a bit of silly feature to begin with, especially on a notebook.
Reactions: bernuli and Arran
Comment
C

Windlasher said:
When are they going to pull Angry Birds?
Click to expand...

Surely the anger that's portrayed by the birds towards the pigs must be causing someone some grief. ¯\_(ツ)_/¯
Reactions: clauzzz203, Ghost31, JosephAW and 1 other person
Comment

Windlasher said:
When are they going to pull Angry Birds?
Click to expand...

When they build a catapult near some pigs, presumably.
Reactions: PBG4 Dude, MacsRgr8, miniyou64 and 1 other person
Comment

Reminds me of the ad banner thing that earned you points if you let it run while you browsed.
Reactions: JosephAW
Comment
T

"As it turns out, the app was indeed pulled by Apple."

What is the FUNCTION of this app? Is it simply a fancy calendar app - now?
Reactions: t1meless1nf1n1t and clauzzz203
Comment
P

They should have banned the developer for this kind of crap.
Reactions: Goatllama, impulse462, bernuli and 15 others
Comment

Apple was just jealous that they didn't think of this first.
Coming soon, free iPhones with built-in always on bit-mining iOS instead of an advertising iOS.
Reactions: Groking and krause734
Comment

I think it might be more do to with it increasing the claim rate on warranties and Apple Care.

Not going to use them either way, Calendar 2 sounds sketchy. Are they even considered a 'top' calendar app even better than, say Fantastical 2?
Comment

Now if instead of mining Monero it was say iCoin...? Cupertinocoin?
Comment
J

Using applications like Little Snitch, you can control what traffic goes out to the internet and block all outgoing traffic from a single application.
Reactions: Goatllama and jecowa
Comment

Given the number of calendar and organiser apps out there I’m really curious to know what this app thought it did that justifies such hefty prices or CPU abuse!
Comment
J

Starfyre said:
Using applications like Little Snitch, you can control what traffic goes out to the internet and block all outgoing traffic from a single application.
Click to expand...

Oh, thanks! I was confused and thought this was an iOS app. I'm not used to seeing in-app purchases in Mac apps. Little Snitch sounds like a great firewall. Hands Off! and LuLu also look like they might be good firewall options.
Comment

If this had been (a) done correctly, so that it was opt-in with full disclosure, (b) only did the mining when on AC power, and (c) did the mining with a sufficiently disfavored priority that it would not compete with other activity on the system, I don't see that it should have been a problem.

Of course, none of those were what happened...
Reactions: chas_m and gnasher729
Comment
E