Apple will discontinue its physical Photo Books printing service later this year, as spotted by 9to5Mac. Using Photo Books, macOS users can choose from pictures taken on an iPhone or iPad, synced to the Mac Photos app, and build books, cards, calendars, and prints that are then mailed to them.

Now, a new message has been spotted in the Photos app on macOS 10.13.6 and states that final purchases for the built-in photo printing service will need to be placed by September 30, 2018. Afterwards, it appears that Mac users will have to opt for third-party companies like Shutterfly to craft physical books made from their digital photos.

Apple explains that users can integrate these third-party services into Photos with a Photos Project Extension downloaded from the Mac App Store. With these extensions, apps like Shutterfly can integrate photo printing services into Apple's own Photos app so users don't have to leave the app to build their photo books. 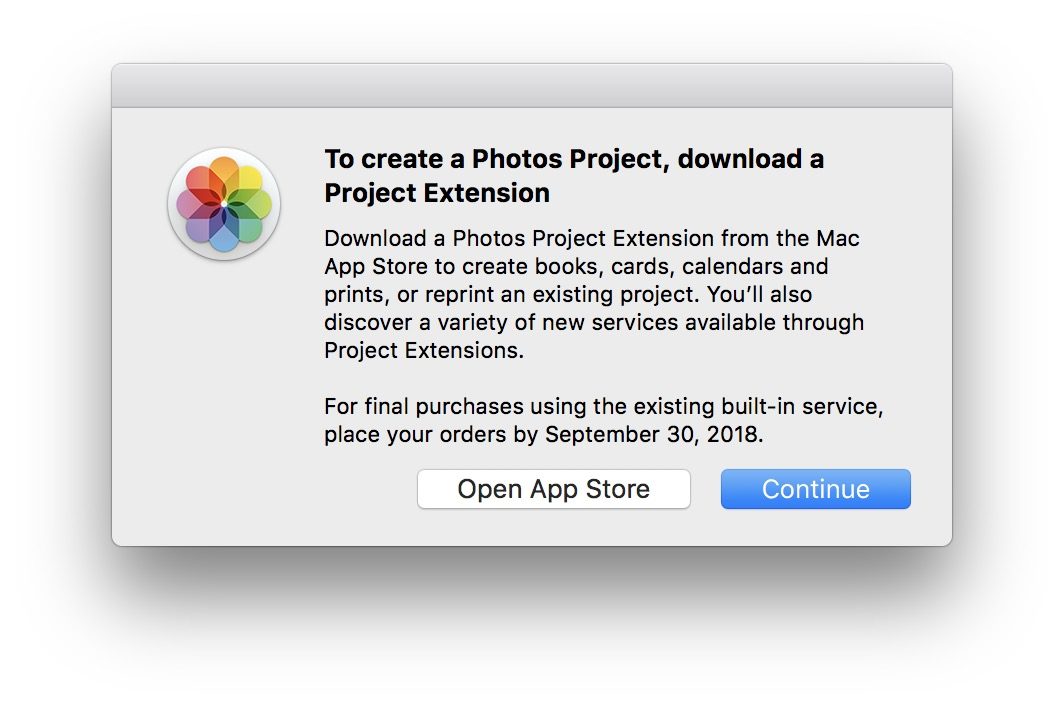 For classic landscape-style books, Apple sells softcover books starting at $9.99 in a medium size, and increasing to $49.99 in hardcover and extra large size. Calendars are $19.99 each, cards start at $0.99, and posters for panoramic shots are also available for $12.99-$17.99. These prices should remain intact until the service shutters in the fall.

What a shame! I just found the service recently and quickly made a project and placed an order, and voilà! Done! And the person received it ASAP and said it was great!!!

I'm going to have to make all my project over the summer and get them out fast.
Reactions: Shirasaki, Sasparilla, Sniffle and 11 others

Well this sucks. I love these books and felt like the pricing was actually pretty fair for the quality. I was planning to make a calendar for my mother-in-law for Christmas per her request, so I guess I'll need to get it done before September 30.
Reactions: Shirasaki, Sniffle, bernuli and 12 others
D

Damn, I was just about to order my first one too... lol

I'll chime in to say my fiancee and I used this after a rare vacation - it was a blast to make and still sits on our coffee table. I'm sure there are plenty of alternatives, but I'm a little bummed they'd choose to end this!
Reactions: Sasparilla, bernuli, ChrisChaval and 9 others

Absolutely. Having 1st party access to printed photo books is quintessential to being a Mac owner and a user of the Photos app.

Hopefully wiser minds will step in to keep this vital service active for the company.

I guess they’re closing the book on this one.
Reactions: Shirasaki, ShinySteelRobot, rafark and 18 others
T

I've never used this service but I liked having the option.

However I did extensively use the birthday card service in iOS before Apple discontinued that a few years ago. It was really convenient and used premium materials.
Reactions: bernuli, computersteve, Wackery and 7 others

Tim probably couldn't find a way to jam a subscription model into it.
Reactions: Shirasaki, rafark, RedCloud2017 and 20 others

I ordered prints (not a book) through this service last year (first time using them) and was actually quite disappointed with the lack of sharpness. Everything else was high quality but the image sharpness was poor. A friend commented on it as soon as he looked at them. I printed the same shot on my HP inkjet at home and compared. The HP was way sharper. I emailed Apple and they sent a new batch for free, but it was the same. I gave up after that and went to Mpix (which is excellent).

Seems to me Apple’s heart wasn’t in this. They were right to close it down.

So they're going to allow project extensions from the App store. Let's all take guesses on how many of those will be subscription based.
Last edited by a moderator: Jul 12, 2018
Reactions: WatchFromAfar, iMerik, Mikey44 and 1 other person
M

kylelerner said:
I guess they’re closing the book on this one.
Click to expand...

Might as well just stop making the photos app while your at it. Just have the app icon open the pictures folder... gezz what a waste.
Last edited by a moderator: Jul 12, 2018
Reactions: Shirasaki, Sasparilla, bernuli and 3 others

I am still upset they discontinue Airport family. In fact I am picking up my Airport Extreme on Sat (ordered to be picked up in store) since the stores do not carry them anymore.

We will miss the Apple holistic ecosystem!
Reactions: Sasparilla, PlayUltimate, computersteve and 3 others
1

This is sad news. I’m pretty sure the only 2 users of this service will be very upset.
H

Huge disappointment. I ordered many beautiful books both hardback and softback over the years. The quality was really decent. I had everything from skiing/snowboarding holidays to books representing my athlete clients.

What a shame I still LOVE the real printed books and there's no way an iPad or whatever could ever replace that for me
Reactions: Sasparilla, bernuli, centauratlas and 8 others

My mom has maybe a hundred of these photo books and that make browsing through a trip really easy and makes it all into a nice story.
Reactions: bernuli, centauratlas, ChrisChaval and 4 others

I couldn't find a 'Photos Project Extension' on the Mac App Store. (I'm not in the US) Were you able to find one? any recommendations for printing books? Thanks!
Reactions: bernuli, centauratlas and computersteve

Apple is good at discontinuing things. They should discontinue the company.
Reactions: rafark, Manzanito, bernuli and 4 others

This is a shame. Sure there are other services offering it, but most are subpar print quality, or they’re a bit better but they cost a LOT more. Steve would have kept this going, this is one of those “if Steve were still here...” situations for sure.

The print products were made in the USA too, no comment on possible job losses.
Last edited: Jul 12, 2018
Reactions: Sasparilla, centauratlas, WatchFromAfar and 5 others

Blackstick said:
This is a shame. Sure there are other services offering it, but most are subpar print quality, or they’re a bit better but they cost a LOT more. Steve would have kept this going, this is one of those “if Steve were still here...” situations for sure.

The print products were made in the USA too, no comment on possible job losses.
Click to expand...

Read the article and still confused... Does this definitively mean that they aren't going to do the cards anymore either, or just the books?

I've made one of these cards every year around the holidays for the last nine years using the same template. It's kind of a tradition. Really sucks if the cards are going too.

Follow-up question: I still use iPhoto (can't give up the manual event splitting and most recent at top sorting)... does this mean they are going to release a "new" version of iPhoto with the Print ordering pieces ripped out?