TUAW tentatively claims that Mira Mobile is hiring for an unannounced Apple event in the last week of February.

The company reportedly coordinates television services for sporting and other live events, including Apple's events. TUAW cautions that this is otherwise unconfirmed information, but speculates the iPhone SDK may be the subject of a late-February announcement. We received a similar (the same?) tip earlier this month, but were unable to confirm it.

Of interest, it does appear that Apple contracts out to MiraMobile for their AV needs. A video documents the AV truck that was used at Macworld San Francisco's Keynote speech, which was stamped with MiraMobile's url: 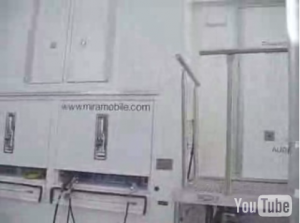 Apple is due for a number of potential releases in the coming weeks: Apple TV software revision, MacBook Pro updates, and Mac OS X 10.5.2. The iPhone SDK, however, is the most likely to warrant its own event.

Definitely iphone/touch SDK. Steve will showcase the new features and the best apps.

Why would they need a full event JUST for the SDK's, which could easily be quietly-but noticeably-announced? I do hope for several upgrades, the most important-judging from so many folks here in the forums-is the macbook pro's long due upgrade.

Goodness, always a reason to think a MBP is coming out on a given Tuesday/week. SURELY this is a guarantee that the MBP will be out by the end of the month. Right?
H

The possibilities are endless

Appler said:
Why would they need a full event JUST for the SDK's, which could easily be quietly-but noticeably-announced? I do hope for several upgrades, the most important-judging from so many folks here in the forums-is the macbook pro's long due upgrade.
Click to expand...

Because it is a huge thing for them to release the SDK.

They will most likely update a few other things simultaneously.
S

iPhone SDK release and probably something else, maybe MBs/MBPs - all to LED
J

What is SDK?
P

John Purple said:
What is SDK?
Click to expand...

Why did i say Standard?? oops, my bad
D

John Purple said:
What is SDK?
Click to expand...

In this case, it will allow people to make programs for the iPhone and iPod touch.
N

Wasn't there something about the rumored tablet not being quite ready for a MWSF release? Maybe...

This sounds reasonable. If they held an event it would give Steve a chance to announce the SDK release and show how apps are going to work with the iPhone. It would also be a great time for Apple to release the updated MacBook Pro we have been waiting for. Hopefully there will be an event.
P

yeah this would be very nice. hopefully there is an event, and that when the SDK for the iPhone is released, so will some new apps
Q

Appler said:
Why would they need a full event JUST for the SDK's, which could easily be quietly-but noticeably-announced? I do hope for several upgrades, the most important-judging from so many folks here in the forums-is the macbook pro's long due upgrade.
Click to expand...

they will also showcase OS X 10.5.2, which i guess is going to have alot more features.
W

It amazes me how secretive Apple is. The only dates they seem to publicly list are for new OS.
C

I just bought a 23" Cinema Display. Do you think I should return it and wait to see if new ones come out...? It is unopened. I have three more days left to return it so I must decide soon.
V

No not the macbooks...

The possibilities are endless

I hope they dont release the Macbook Pros so soon, I ordered one yesterday