Apple's Phil Schiller, responsible for Apple events and the App Store, has deactivated his Twitter account following recent developments on the platform. 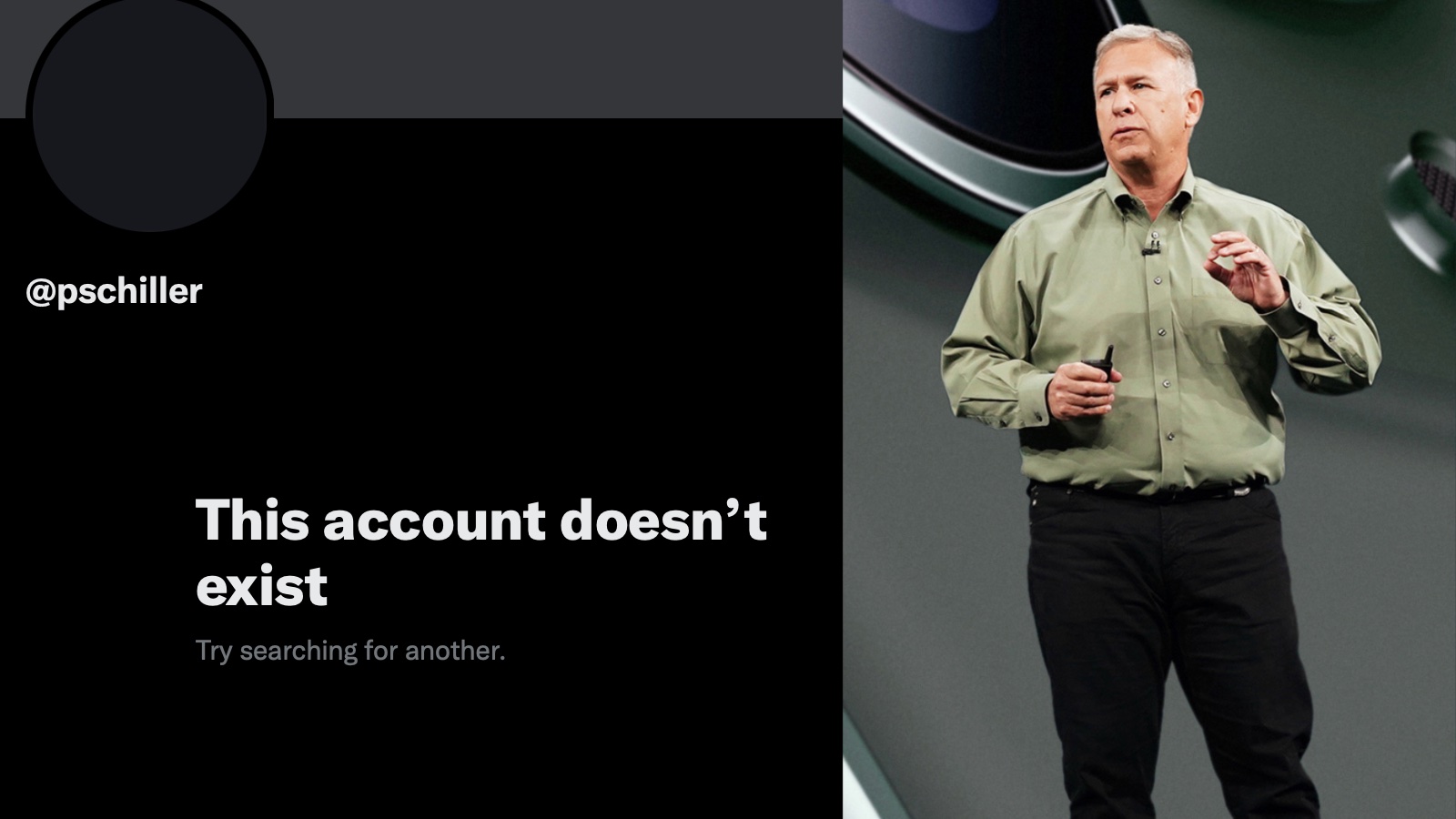 Schiller often used his account to promote new Apple products, services, software, and initiatives and interact with customers. As noted on Twitter by Bloomberg's Mark Gurman, however, Schiller's account no longer exists. The account had over 200,000 followers and was created in November 2008 according to a web archive of the account dated November 4.

Yesterday, Twitter CEO Elon Musk announced that former President Trump's account would be reinstated on the platform following its suspension in January 2021. In a recent interview, Apple's CEO Tim Cook commented about the future of Twitter and the social media platform's relationship with Apple. During the interview, Cook said he remained hopeful Twitter would uphold its moderation standard under the new leadership.

Good job, I did the same thing
Reactions: realeric, splifingate, iLLUMI and 149 others

Might as well. It's all over but the shouting now.
Reactions: imlovinit, FriendlyMackle, maxoakland and 49 others

Many will realize life can still be productive and have meaning without Twitter and the like.
Reactions: realeric, Dudebro101, bobmepp and 125 others

He still has another one.. He is too narcissistic to drop it totally.
Reactions: ddavid, bobmepp, Apple Core and 71 others
B

Even Trump has rejected Twitter. Nothing is more pleasing than watching Musk flush $44 Billion down the toilet.
Reactions: realeric, iLLUMI, Your Royal Highness and 101 others
F

I hope more people will follow this example
Reactions: realeric, iLLUMI, Your Royal Highness and 78 others

Phil has been entertaining but largely worthless for a long time. Sad but true.
Reactions: Apple Core, iLLUMI, darthgreen and 64 others

Goodbye all these people leaving Twitter are annoying, they had no issues with leader of Iran on there before, Twitter is a better place now
Reactions: Te0SX, mansplains, ddavid and 224 others
M

The basics of the platform are sound so long as it keeps ticking over.
Reactions: MRrainer, Makisupa Policeman, MarkosXT and 61 others

This is the best entertainment since the invention of cable television. I’m enjoying this to the fullest! 🍿✌🏼
Reactions: Makisupa Policeman, stevekr, !!! and 44 others
J

Bravo! now if all the other critics of Musk would just follow ... users need to start speaking out!
Reactions: Your Royal Highness, virgin71, maxoakland and 34 others

Most will not actually quit, and the people that follow through will be back.. Just like they didn't leave the USA when they said they would. All the "quit" talk just shows what an echo chamber it was and that nobody really wants any opinions other than the ones they cuddle up with on their tear stained pillow..

The fact that everyone needs to talk about twitter 24/7 is telling. When I quit something I don't need to virtue signal that I quit it.. lol
Reactions: mansplains, singhs.apps, Apple Core and 137 others
C

I use Twitter for specific purposes. More finance and networking than anything. Hardly post to it. I don’t see that changing. Or why anyone cares about this nonsense. Lol
Reactions: singhs.apps, darthgreen, Powerguru and 42 others
N

i don't even understand what people are outraged about. he bought it and owns it, and wants to improve it and everyone is upset because he allows people on there that you have a disagreement with. where is all this self-righteousness coming from? most twitter users are secular so they don't even have a justification for their fake moral codes
Reactions: Te0SX, mansplains, Apple Core and 163 others

I love the meltdown that’s going on with a certain political group. It’s awesome! 😂
Reactions: mansplains, Dudebro101, Tim Apple’s Glasses and 148 others

I don't like Trump, but I like censorship less. Shine a light on everything.
Reactions: Dudebro101, singhs.apps, StoneyG and 146 others
N

russell_314 said:
I love the meltdown that’s going on with a certain political group. It’s awesome! 😂
Click to expand...

their "morals" change like the wind too. it's not rooted in any real principles. whatever is en vongue that's all. if the collective hivemind decides using a toilet is bad, they will call everyone that uses a toilet a demon.
Reactions: mansplains, Tim Apple’s Glasses, singhs.apps and 123 others

Funny how one side a year ago was leaving Twitter because they COULDN’T have a discussion.


Now one side is leaving because there IS a discussion.
Reactions: mdridwan47, mansplains, KazKam and 139 others

All of this free Twitter advertising....
Reactions: Makisupa Policeman, jooish, aristobrat and 39 others

BootsWalking said:
Even Trump has rejected Twitter. Nothing is more pleasing than watching Musk flush $44 Billion down the toilet.
Click to expand...

Twitter is at an all time high, with a new revenue stream in a week
Last edited: Nov 20, 2022
Reactions: AgentAnonymous, lyngo, Sedulous and 51 others
C

I also strongly suggest shorting the stuffing out of TSLA. I’ve made quite a bit doing that recently.
Reactions: ProfessionalFan, decypher44, grs5003 and 18 others
G

BootsWalking said:
Even Trump has rejected Twitter. Nothing is more pleasing than watching Musk flush $44 Billion down the toilet.
Click to expand...

Trump likely legally *can’t* go back to Twitter. If he leaves Truth Social it dies, and his investors wouldn’t be happy, so they probably made him sign a contract saying he wouldn’t return if he could.


Not sure what Schiller’s mad about, all he does is lie for a living, like every other marketer.
Reactions: Makisupa Policeman, MarkosXT, stevekr and 55 others
N

ceriess said:
I also strongly suggest shorting the stuffing out of TSLA. I’ve made quite a bit doing that recently.
Click to expand...

you could've done that with the whole stock market this year and done well
Reactions: nerdherdster, KazKam, Oblivious.Robot and 18 others

nutritious said:
you could've done that with the whole stock market this year and done well
Click to expand...