Following months of bleak news about Peloton's "precarious state," including the revelation that it has halted production of its bikes and treadmills, Apple is being floated as a potential buyer of Peloton's troubled fitness business. 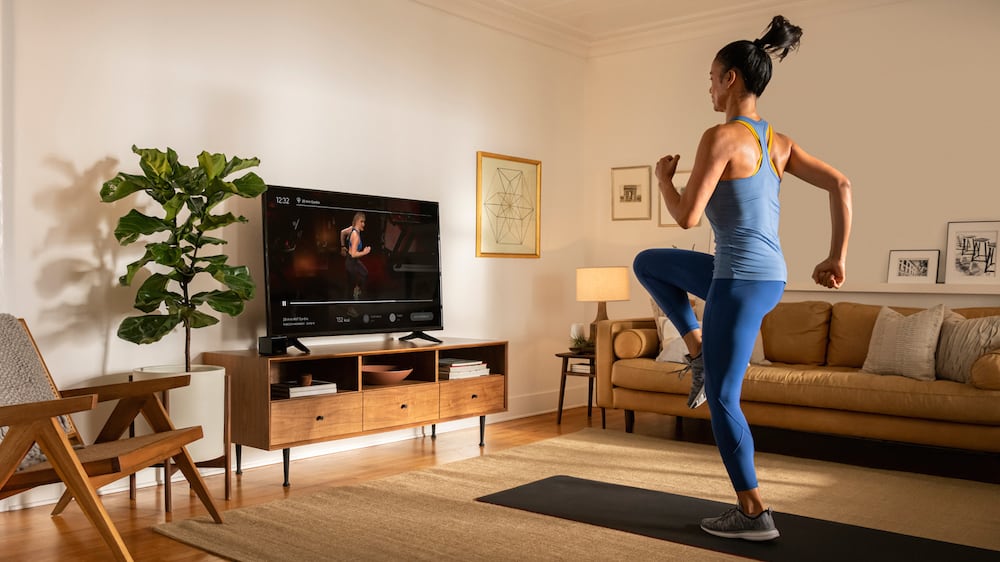 Yesterday, CNBC reported that Peloton will temporarily stop production of its connected fitness products due to a "significant reduction" in consumer demand, a pressing need to control costs, and amplified competitor activity. In a confidential company presentation earlier this month, Peloton told employees that products such as the Bike, Bike+, and Tread will be out of production for between six weeks and six months.

As a business, Peloton has high customer acquisition costs, translating to high product pricing. Toward the end of last year, the company reduced the price of its entry-level bike by almost 20 percent to $1,495 in an attempt to drive up sales through the end of 2021. It then emerged that the company is planning to lay off 41 percent of its sales and marketing staff.

CNBC also revealed that the company's fiscal forecasts do not take into account new delivery and setup fees between $250 and $350 that customers will have to pay on top of the cost of the Bike or Tread. In addition, Peloton has seen low email capture rates for its upcoming $495 strength training product, "Peloton Guide."

In a press release preannouncing its upcoming financial results yesterday, Peloton CEO John Foley said that the company is now "taking significant corrective actions to improve our profitability outlook and optimize our costs." Peloton's stock has since plunged 24 percent, now floating around 85 percent below where it was trading this time last year, and even $5 less than when it went public in 2019. There are also indications that Peloton is losing market share in the connected fitness industry.

The Information reports that Peloton's production halt and the precarious state of its business looks like a prelude to an acquisition by a bigger company, positing that Apple is the ideal candidate to buy Peloton:

If Peloton is to have a future, it would be better off as part of a bigger, more diversified company. Apple is an ideal candidate to take on that project. It has the Fitness+ subscription service for classes and it markets the Apple Watch as a device that can help with jogging and other exercise activities. It could close Peloton's stores and sell the equipment through its own stores. And hey, after today, Peloton's market capitalization is down to $7.9 billion. Cook could pay for that by dipping into the change jar in his kitchen.
Click to expand...

The idea of Apple acquiring Peloton is gathering steam among market observers, with the possibility being weighed up by The Motley Fool and Inc., among others.

Analyst Neil Cybart recently highlighted how Peloton is now actively threatened by Apple Fitness+, which is considerably cheaper, costing up to $388.01 less annually for digital classes alone. Cybart cautioned that without major changes in 2022, "Peloton is on track to be a Fitbit 2.0 - a company unable to compete with the giants subsidizing health and fitness tracking as an ecosystem feature."

Are Apple considering investing in Coal as well?
Reactions: Blowback, amt2002, Marshall73 and 44 others

I’m surprised Peloton didn’t fail sooner. Expensive bikes, expensive subscription. You get the same thing with a phone/tablet and any cheap bike/treadmill paired with a subscription to some fitness program, many of which are cheaper than peloton or even free.
Reactions: wild flight, amartinez1660, clandherr and 50 others
M

Yah that ain't happening.
Reactions: Lazy, valleian, duanepatrick and 9 others

I wonder what Apple's angle would be. I put an iPad mount on my $99 exercise bike to use on snowy mornings. Peloton, shmeloton.
Last edited: Jan 21, 2022
Reactions: Lazy, vmistery, valleian and 21 others
M

Probably someone with peloton stock trying to raise the price so they can sell.
Reactions: Drogba11, atkinsonr, Lazy and 65 others

Peloton does not deserve to get bought out, just needs to go under. Ridiculous business model.
Reactions: robd003, entropys, Borin and 38 others

I actually like the idea, but I'm not sure it's a good long-term acquisition.

Why buy? Kill them then take their people. Why buy debt? That's stupid. This is business, not Sesame Street.
Reactions: Lazy, amartinez1660, entropys and 37 others

Sciomar said:
Peloton does not deserve to get bought out, just needs to go under. Ridiculous business model.
Click to expand...

Instead of Peloton, I ride my bicycle outside in the fresh air. Much cheaper, and I get good-ole vitamin D!!!!!
Reactions: Lazy, jchap, Borin and 38 others
M

Apple don’t buy what they can recreate.
Reactions: Antes, Lazy, amartinez1660 and 11 others

I always thought it had a limited consumer base. Proving to be true.
Reactions: Lazy, vmistery, valleian and 6 others

Apple is very big on when it comes to fitness. If Apple doesn’t make the purchase some other company will.
Reactions: jchap, svish, duanepatrick and 6 others
B

Their product is extremely overpriced. Simple as that.
Reactions: robd003, Lazy, gene731 and 18 others

I was skeptical about Peloton... but they had a great Black Friday deal this past November and my wife has enjoyed it when she used a friend's Peloton. So, I bought one. And it's actually really nice. The workouts/instructors are really good and the hardware of the bike hasn't been a problem at all.

I also owe a rowing machine and enjoy doing the Apple Fitness+ rowing workouts with Josh. I also do the core workouts and occasional yoga workouts on that platform.

Let's say Apple does buy Peloton (which I don't think they will): Can they connect my Apple Watch to it through a software update to give us access to Health Kit? We didn't get Bike+, which comes with Health Kit access. Can they work Apple Fitness into the Android platform (probably)? Does Apple keep the Peloton name? Lots of questions.

Also, the instructors on Peloton have developed their own brands over the years and command big money. There was an article recently citing that all of these instructors now make more money off social media and have agents to work their contracts with Peloton and other sponsors. Apple would definitely have enough money to pay them if they knew it would bring in more subscribers.
Reactions: kiensoy, amartinez1660, Marty_Macfly and 12 others

All of these comments are clearly from people who have never actually used a Peloton.
Reactions: AltJ, kiensoy, flur and 25 others
M

User 6502 said:
I’m surprised Peloton didn’t fail sooner. Expensive bikes, expensive subscription. You get the same thing with a phone/tablet and any cheap bike/treadmill paired with a subscription to some fitness program, many of which are cheaper than peloton or even free.
Click to expand...

You don't really get the same thing. The same argument could said about Apple computers, expensive and people can just buy cheaper PCs for roughly the same thing. But we all know the 'same thing' here isn't actually the same.

Pelotons problem is their market is the spin market, not the general exercise bike market. They got overextended during covid and appear to have poor management based on how they handled the Tread issue.

Apple and Peloton would actually be a great fit with what I would guess a fairly large overlapping customer base right now. The only question is if Apple wants to do more with fitness or just keep it an Apple Watch thing...
Reactions: Lazy, flur, jeffu and 3 others

User 6502 said:
I’m surprised Peloton didn’t fail sooner. Expensive bikes, expensive subscription. You get the same thing with a phone/tablet and any cheap bike/treadmill paired with a subscription to some fitness program, many of which are cheaper than peloton or even free.
Click to expand...

In my opinion, Apple Fitness + alone is much better.
Reactions: svish, duanepatrick, SFjohn and 8 others

If Apple were to buy Peloton, the only part of the business that has any value are the digital workouts. That is not worth anywhere close to $7.9 billion.

Apple could purchase that part of the business, make it all part of Fitness+ and gain all the Peloton subscribers to that service. As far as Peloton equipment, that side of the business would be allowed to just vanish. Some sort of plan would be needed to service the existing equipment until their warranties run out.
Reactions: Alfredo_Delgado

I love my Peloton bike and the community that it fosters. I bought mine late 2020 and have been an active user, riding 6 days a week. I’ve significantly improved my health and fitness over the past year and a half. Regardless of whether there is a pandemic or not, it’s hard to beat being able to jump on the bike on my schedule, without having to get in the car and drive to a club.

I do think Apple buying Peleton would be a great addition to their Health initiative. It does seem like Apple needs to have some kind of physical product for exercising, to tie their services together better. I hardly use the Health app, haven’t taken any classes because I’m roped in too much with Peloton already, although I do track my health stats through Apple.
Reactions: flur, stlsot, Marty_Macfly and 13 others
B

Secondary question, do they even support GymKit? I’m not sure I’ve ever seen a single piece of exercise equipment in the wild that does.
Reactions: SFjohn, dominiongamma and B.A.T
I

Largest acqusition of Apple was $3 billion for Beats! That's why this story is pointless, as it is now at $8 billion, thanks to this story. Apple doesn't acquire overpriced companies, but likes to buy smaller startups with good ideas, before they exploit. This story is just some large investor trying to talk up Peloton's stock. I am sorry for them, but they had quite a journey and Kathy Woods really promoting them.
Last edited: Jan 21, 2022
Reactions: Lazy, amartinez1660, Blowback and 6 others

iBluetooth said:
Largest acqusition of Apple was $3 billion for Beats!
Click to expand...

I agree. That’s why this company is chump change for Apple.
Reactions: svish