Apple has hired two former Mercedes engineers to join the company, likely as part of its effort to continue to build out its internal workforce as the development of an "Apple Car" continues.

The Apple Car, internally codenamed "Project Titan," is one of the company's most secretive projects. Despite a myriad of rumors, Apple's ultimate goal in the automotive space remains unclear. The most recent hires by Apple joins a list of former engineers and executives the Cupertino tech giant has tapped in from some of the world's largest car makers.

As the company continues to build up its workforce with skills and talents needed to produce and develop a car, Apple has also had several setbacks. The company lost several top managers from "Project Titan" over the course of the year, potentially derailing the timeline for an "Apple Car." Kevin Lynch, well known for work on the Apple Watch, is helping to lead "Project Titan."

While Apple has invested in its in-house talent over the past years, it will also need to rely on third parties to help it get the wheels moving. Apple is reportedly in discussions with several suppliers, including its most significant, Foxconn, and carmakers regarding a partnership. The talks and discussions have so far not materialized into any formal deal.

Foxconn, which serves as the mass producer for the iPhone, is likely to be tapped to play some role in the supply chain of an Apple Car, said to be at least half a decade away. One of Apple's most recent aforementioned hires previously held responsibilities in the mass production release schedule of Mercedes cars, which could be an asset to the company.

Siri, drive me to the nearest bar. ?
Reactions: wwetech, TheYayAreaLiving 🎗, whoknows2597 and 1 other person

I guess this means the Apple Car will be both expensive AND require frequent repair or costly maintenance.
Reactions: NARadyk, Deliro, Desforado and 24 others

Why is Apple trying to build a Mercedes when they should be working on the Apple Car or at the very least an upgraded Mac Mini
Reactions: wilhoitm, diandi and wnorris

It will only drive you to a Made For AppleCar©️ bar.
Reactions: snek, wwetech, AmazeSE and 4 others

Apple car in the making. I wonder if Apple will be able to introduce iCar before Tim Cook retires.
Last edited: Sep 3, 2021
Reactions: wnorris, AngerDanger, chrisdazzo and 1 other person
D

From all the Patents granted AppleCar is getting closer and closer…2024 seems about right.
Reactions: TheYayAreaLiving 🎗

I really don't anticipate that working out too well… 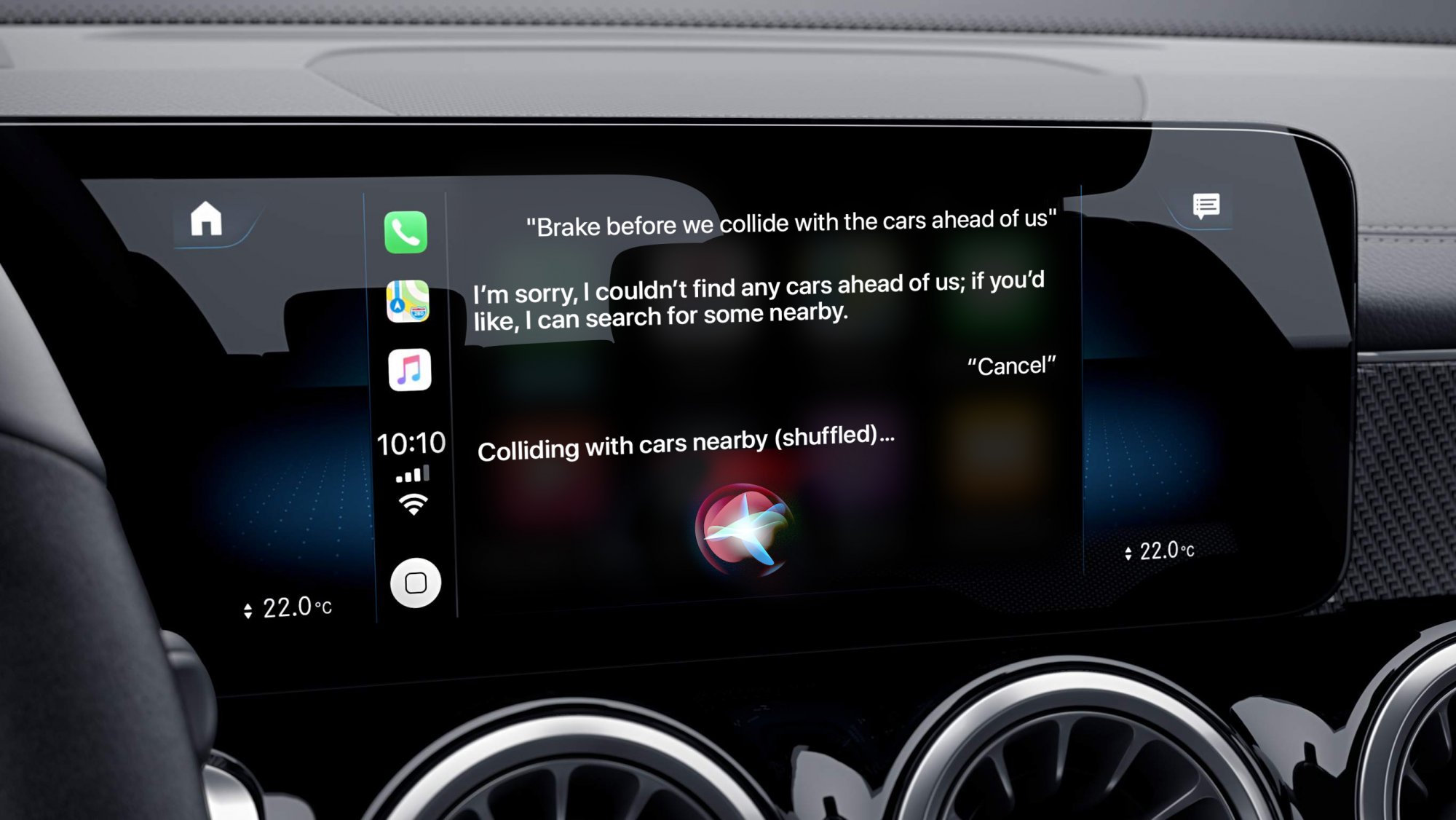 There is no need for an Apple Car. TESLA is the Apple of cars and Musk is the car Jobs.
Reactions: Desforado, wwetech, wilhoitm and 8 others

After all these years of development, the least I’m hoping for is a flying car, with anti-gravity as a Pro option.
Reactions: TonnyTech and StoneJack
N

Wasn't it musk who said that Apple is Tesla ex employees' graveyard?
Reactions: tcp/ip and thebeans

I keep thinking this is not about Apple making cars but rather selling some form of vehicle intelligence to the automotive industry.
Reactions: PC_tech, lfaa, pplfn and 1 other person
J

2 engineers don’t make a car, they’re only part of a large team and as secretive as this project supposedly is… I still doubt that Apple will actually make its own car…
Reactions: wnorris and thebeans
J

now i see it said:
Wasn't it musk who said that Apple is Tesla ex employees' graveyard?
Click to expand...

Yea, the guy who promised a truck that is now what 2 years delayed and a roadster that is now 3 years delayed???
I think he still has a lot to learn about manufacturing…
Reactions: abhishake, danny842003, istvan and 9 others
M

now i see it said:
Wasn't it musk who said that Apple is Tesla ex employees' graveyard?
Click to expand...

Musk has said and will say more stupid things as well.
Reactions: lfaa, Pezimak, CarlJ and 5 others

bradman83 said:
I guess this means the Apple Car will be both expensive AND require frequent repair or costly maintenance.
Click to expand...

So the Brits are going to be manufacturing it?
Reactions: AngstyKylo, -DMN-, istvan and 6 others

rpmurray said:
So the Brits are going to be manufacturing it?
Click to expand...

Sir, I take exception to your comments and I demand satisfaction ??
Reactions: Desforado, SidricTheViking, Applebot1 and 5 others

While I doubt Apple is actually working on a car (I'm going to guess car technology), I really hope: A. tech blogs stop using images of smooshed Tesla Model 3's with a glowing Apple logo plastered on the front and back (so horribly ugly), and B. Apple partners with an OEM and spins off a new brand therein if they do ever produce a car.

With Apple's new M1 chips and the future looking real bright for future MX chipsets, why not start producing in-car "computers" that power audio, sensors, etc.? That makes a lot more sense than this hypothetical "Apple car" that gets fanboys drooling all over themselves. Watch Apple leapfrog GM/VW/Tesla et al's sensor arrays and "autopilot" software with a much smaller hardware footprint, level 4-5 operation, and sell it to manufacturers - unlikely as most manufacturers have their own versions, though, and that's a tall mountain to climb, even for Apple.

Proceed to checkout: your configured Apple Car will require purchasing a set of tyres for $20k separately.
Reactions: Deliro

You're on to something, IMO. I don't think Apple is going into the car building business. I see them building a self-driving system (cameras, computer, AI) that can be intergrated into a car.

I'm really curious what they envision for an Apple car. Fully autonomous cars are not likely to be realized within my lifetime. I wonder what value they expect to add to what's already out there.
C

rcread said:
I'm really curious what they envision for an Apple car. Fully autonomous cars are not likely to be realized within my lifetime. I wonder what value they expect to add to what's already out there.
Click to expand...

rcread said:
I'm really curious what they envision for an Apple car. Fully autonomous cars are not likely to be realized within my lifetime. I wonder what value they expect to add to what's already out there.
Click to expand...

Since a Tesla is heavily software based why wouldn't Apple just make their own environment? Look at https://www.tesla.com/AI does it remind you of anything that Apple is perfectly capable of? I think the whole concept of autonomous cars is very risky as human oversight is still a prime requirement in spite of whatever Musk preaches. But there is a awful lot of accident prevention systems that can be improved on compared to todays car offerings. Likely Apple has been showing automotive vendors what they are working on, to see if they are interested in incorporating it into future transportation vehicles. So no Apple car but multiple manufacturers using their technology would be a great expansion into new marketplaces.
Last edited: Sep 3, 2021
You must log in or register to reply here.
Share:
Facebook Twitter Reddit Email Share Link
Register on MacRumors! This sidebar will go away, and you'll see fewer ads.
Sign Up
Top Bottom