Apple appears to have made some significant improvements to the way App Store searches work in recent weeks, returning more relevant, intelligent results whenever a keyword search for an app is conducted, reports TechCrunch.

App rankings for search results now appear to take into account factors that go beyond simple keyword listings, like partial keyword matches and competitor brand names, somewhat de-emphasizing the keywords that developers enter manually. As an example, a search for "Twitter" now brings up relevant apps like Tweetbot, something that didn't happen before the shift. 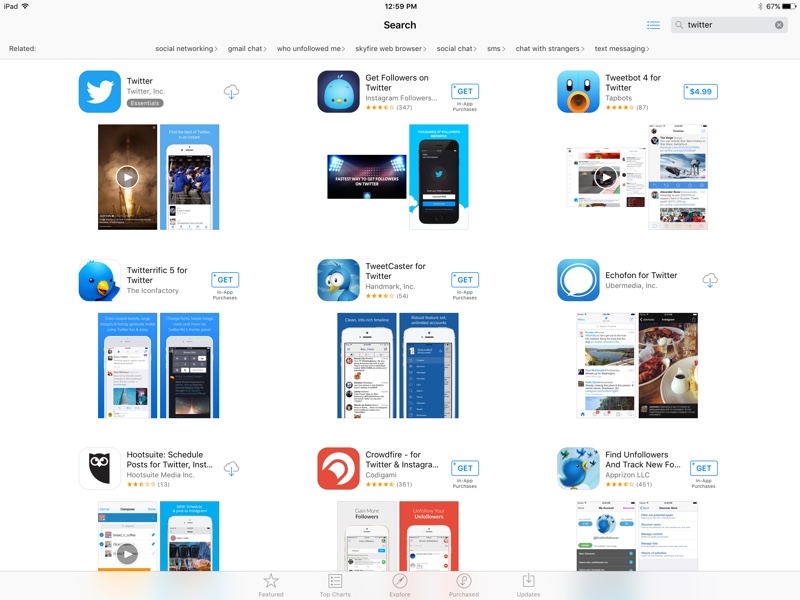 It's also the first time the App Store has ranked apps for keywords that are not in the title or the "keyword," slot, we understand.

For developers searching against their own app name, what this change means is that they'll now see a number of competing apps that didn't show up before, and an overall expanded list of matches.
Click to expand...

AppFigures CEO Ariel Michaeli told TechCrunch the App Store uses a new suggestion function that takes into account the "essence of the app" and puts more emphasis on on-page components.

Apple is constantly making changes to the way apps come up in charts and through search, in an effort to improve app discovery. The recent search algorithm changes appear to be bringing up much more useful results, but as TechCrunch points out, Apple could make further improvements by utilizing metrics like whether an app was featured, positive reviews and press mentions from the web, and its overall usage.

Something that is desperately needed. Unless you spell the app name exactly correct, it rarely finds what I'm looking for.
Reactions: attila, Mums, Sandstorm and 13 others
J

I would assume Apple improves algorithms on a regular basis.
Reactions: attila, VanZan, HansumKingtut and 2 others
C

Well, what about the Apple Watch App Store?
search algorithm aside, all featured apps have been the same for ages,
and the very few apps that are actually useful are still not native apps.
I just want the watch store to be interesting as the main App Store
Reactions: RabbitLuvr and Zirel
C

Makes me wonder what a lot of their staff do with their time. This has been such a seemingly neglected area yet the App Store is so important to users, developers and most of all, as a revenue stream for Apple.

Here's hoping that the top 10 charts might look slightly different in the future. For the last few months and years they certainly haven't.
Reactions: S G, attila, tl01 and 15 others

I guess it is not that hard to include "Tweetbot 4 for Twitter" when someone searches for "Twitter". Nice algorithm, Apple!
Reactions: NMBob and AleXXXa

Let's hope that this will weed out some of the opportunistic keyword-reliant garbage apps that swamp every possible search term.
Reactions: Sandstorm and Ploki

App store is a nightmare. It's nearly impossible to search apps without knowing exact names.
Reactions: PeteLP, Digger148, attila and 16 others

derek4484 said:
Something that is desperately needed. Unless you spell the app name exactly correct, it rarely finds what I'm looking for.
Click to expand...

Desperately needed: the ability to spell? I mean I know spellcheck is a thing (and apologies if you're dyslexic or something, but given that you spelled everything in your post correctly, I'm going to guess you're not), but how much must technology fix our mistakes? Shouldn't humans be able to navigate life without technology correcting our problems for us?

Kudos to Apple for improving the search functionality. It seems like if Apple does right, people complain, and if they do wrong, people still complain.

Well... Geez, Apple... Why didn't you do this before!!?! You ruined my life and made all of my Apple products worthless by not releasing a perfect product to start with. What a crappy company... /s
Reactions: gixxerfool
1

And now maybe they could also improve speed and responsiveness a bit.
Reactions: Sandstorm, dk001 and Benjamin Frost

Didn't Apple buy a company that had their own app store search a couple of years ago? Are they just now incorporating that tech/code?
Reactions: Sandstorm
Z

realeric said:
App store is a nightmare. It's nearly impossible to search apps without knowing exact names.
Click to expand...

Totally agree, i can never find anything i want to.

In the end i just google what i am trying to find, then it takes me to it in the App store. Shouldn't have to do it this way, but it works.
Reactions: attila and Sandstorm

Well...I'm happy about this and have nothing bad to say.
2

It's 2015 and the App Store search has been working like Google search did 20 years ago.
They should also start hiding or lower positioning of apps that haven't got an update for 6 months or so.
Reactions: S G, Sandstorm, RabbitLuvr and 2 others

This feels like re-arranging the deckchairs on the Titanic.

The App Store is in dire need of a complete overhaul. It is hopelessly restricted for app discoverability. We need more categories, more sub-categories and sophisticated filters accessible at the top of the page. We need to be able to hide apps individually or by category. For instance, I do not want to see any apps with gold, gems or other treasure as In-App Purchases. These apps are all junk to me. We need free demos for every single app, even for 30 minutes. We need longer video previews, video tutorials and more screenshots. We need to be able to tailor the App Store to fit our devices and desires.

Get to it, Apple. If only you hadn't fired Forstall.
Reactions: S G, Mums, Sandstorm and 8 others

Search on the app store was always terrible. I remember always having to have the app name exactly right. I also remember lots of irrelevant results showing up when searching for simple things like Adobe's apps. I recently did a clean install of iOS 9 on my 6s because I had some issues with random freezes during the night making my alarm go off (along with a hot home button, ended up being replaced by Apple) so I had to search for a lot of my apps to install them from scratch. I remember when doing the Adobe apps it would bring up guide books and other weird stuff as the top result. Even now I just tried searching Lightroom and accidentally typed Loghtroom and it still found it fine! Kinda sad that it took them this many years to get basic search right. Even I setup the WordPress install for our news site at work to search for partials and across various pieces of metadata and tags in the database. Why did it take this long?
Reactions: Sandstorm, keysofanxiety, iamPro and 5 others

Nice! To be honest though I have never had a problem searching for stuff.

(Slow clap)
This only took years. I still don't believe it. Add these algorithms to Maps and I may begin to believe it.

cmichaelb said:
Didn't Apple buy a company that had their own app store search a couple of years ago? Are they just now incorporating that tech/code?
Click to expand...

Apple "search" has sucked for years. It's always sucked. The only thing worse, which also uses "search", is Apple spell "correct".
Reactions: Woyzeck and dk001

I never had an issue with the search function before... That is until I passed down an old iPad to my 3 year old Grandson, and was trying to load it up with pre school educational apps. I kept getting the same basic results, no matter what I searched for. I know there has to be a ton more out there, other than what was showing up.
Reactions: keysofanxiety, Benjamin Frost and dk001

derek4484 said:
Something that is desperately needed. Unless you spell the app name exactly correct, it rarely finds what I'm looking for.
Click to expand...

Just so I'm straight here: If *I* misspell the app name, *you* don't get what you're looking for?...

Ah... That's why my app downloads have essentially halved over the past couple of weeks...
Reactions: grandM
W

Everyone going out of their way pointing out other's spelling/grammar mistakes in posts... Geesh.

It really should work more like Google search, delivering relevant results for a particular app, even if you happen to misspell it's name. The whole world of AppStore users doesn't need to know to exactly spell an app name, and either get no results or get some bogarted name tagged app that has nothing to do with the original.
Reactions: Digger148, Sandstorm, Woyzeck and 1 other person