Apple today sent out a press release announcing an update to its professional video editing software, Final Cut Pro X, along with updates to companion apps Motion and Compressor. The updates bring new features for motion graphics and enhancements to speed up video editing, packaging, and delivery.

As described by Apple, Final Cut Pro's 10.2 update marks the debut of easy-to-use tools for the creation of 3D titles, with a variety of templates that include built-in backgrounds and animations. Text styles can customize the look of titles with different materials and lighting, and it's possible to convert 2D to 3D titles and see changes in real time. 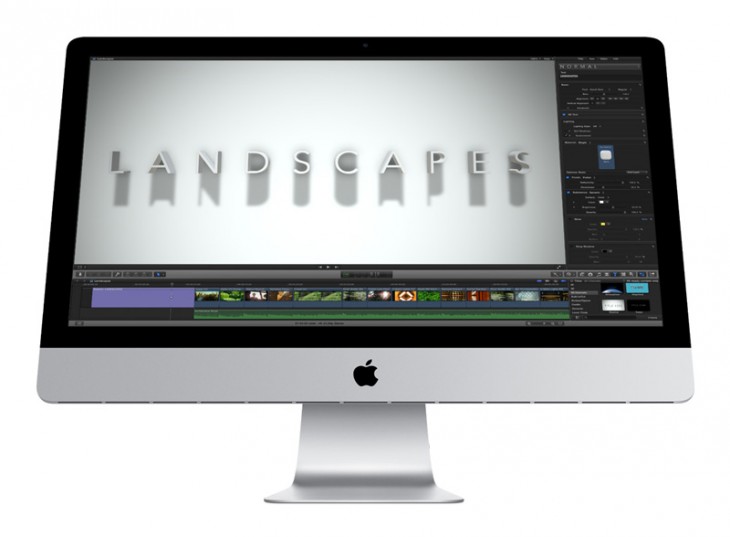 Today's update also lets editors view up to four video scopes at the same time for better precision when color grading, and there are now improved Shape masks that can be applied to any effect and saved as a preset. Finally, the update includes support for more video formats and makes it faster to work with RED RAW files.

Motion 5.2 offers additional options for 3D titles, bringing tools for the creation of dynamic titles with lights and cameras, while Compressor 4.2 makes it easier to prepare movies for sale on the iTunes Store.

Apple's press release includes details from Glenn Ficarra and John Requa, who co-directed the Will Smith film Focus and used Final Cut Pro X to edit the video. The duo's work with the software was previously featured by Apple on its Final Cut Pro X feature page.

"We loved using Final Cut Pro X to edit Focus," said Glenn Ficarra and John Requa, co-directors of the 2015 feature film, Focus. "We created the final theatrical titles for the movie right in Final Cut Pro, and the new 3D titling and effects features will let us take in-app graphics even further. We're using the new Final Cut Pro on our next feature film."
Click to expand...

Several sites have been able to get hands-on access to the new software updates ahead of their launch, and have shared details on the new tools included in the update. Fcp.co has a complete rundown on all the new features, along with screenshots, as does The Next Web.

All of today's updates are free for existing Final Cut Pro, Compressor, and Motion users.

Final Cut Pro can be downloaded from the Mac App Store for $299.99. [Direct Link]

Compressor can be downloaded from the Mac App Store for $49.99. [Direct Link]

Motion can be downloaded from the Mac App Store for $49.99. [Direct Link]

That FCP icon though!

cambookpro said:
That FCP icon though!

Yes, that icon is a huge improvement
M

I've been playing around with it for a few minutes. It does feel faster, and the 3D titles.... Holy Crap. You can customize the crap out of everything. There are so, so many options, including lighting and a million "materials" to make the titles out of. You can also make different parts of the title different materials.

Every company I know is using Premiere. There is just one guy I know using FCPX.

No, but Handbrake does.

I'm currently on the fence with Final Cut Pro. I want it so badly BUT...it's just to learn and play with.

Hi Chrono! My name is heimo and I'm software addict too. ;-) I don't even edit videos and I want to get FCPX so badly.

chrono1081 said:
I'm currently on the fence with Final Cut Pro. I want it so badly BUT...it's just to learn and play with.

Instead, get the new -free- Resolve 12 when it's available.

Love the updates!
FCPX is the only NLE that can support true multi-cam 4K editing...
I've run 16 angles in 4k (not Proxy) with tons of layers, and no issues!
But, I would suggest a very fast SSD RAID. (Like BlackMagic's Muti-Dock)

rei101 said:
Every company I know is using Premiere. There is just one guy I know using FCPX.
Click to expand...

Yeah, we know. Thanks for the information!
W

You don't want to export in that format.


rei101 said:
Every company I know is using Premiere. There is just one guy I know using FCPX.
Click to expand...

We have two left on 7 at my company but we're moving to Premiere as well as soon as they can be convinced to learn something new.
Z

3d text. A good sign that we are due for a huge 15 inch macbook pro update. Take my money .
S

Great updates, Apple has followed through on their commitments to FCP X, course they let Aperture whither on the vine and die - as a user its a real risk (longer term) making a commitment of time and effort to Apple's pro software products.


ValSalva said:
This must be timed to coincide with the release of the new MacBook
Click to expand...

It's always good to add some context, the ~1Ghz dual core MacBook that defaults to 4GB RAM, maxes out at 8GB and whose CPU performance numbers are roughly equivalent to the iPad Air 2 released last year. Okay, that was fun. I think the new MB is really meant for folks that want an iPad with a keyboard.

Probably its meant for the 5k iMac, Mac Pro and top of the line MBP.

Wait, how do those 2 things relate?
K

Does anyone have a list of what the supported hardware is?

I doubt it ever happens. Apple will probably just let developers add plugins to photos like they do now for photos for iOS.

I take it this is confirmation that J.J. Abrams has accepted a position at Apple?
R

nagromme said:
I take it this is confirmation that J.J. Abrams has accepted a position at Apple?
Click to expand...