Though Netflix had been in negotiations with the Obamas for several months, Apple was rumored to be interested in working with the duo had the Netflix deal fallen through. Apple has been developing a slew of original television shows, and a deal with Michelle and Barack Obama would have been a big win. 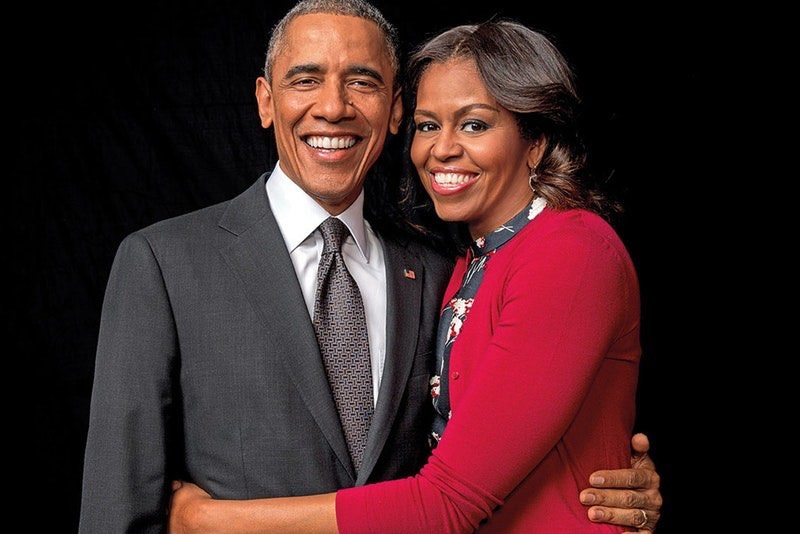 Image via Getty Images​
Obama's deal with Netflix will allow for him to create content that will reach millions of people both in the United States and internationally through a new production company he created alongside Michelle Obama called "Higher Ground Productions."

According to Netflix, the Obamas will create "scripted series, unscripted series, docu-series, documentaries, and features" that are meant to highlight the issues and themes the president worked on during his eight years in office.

"One of the simple joys of our time in public service was getting to meet so many fascinating people from all walks of life, and to help them share their experiences with a wider audience. That's why Michelle and I are so excited to partner with Netflix -- we hope to cultivate and curate the talented, inspiring, creative voices who are able to promote greater empathy and understanding between peoples, and help them share their stories with the entire world."
Click to expand...

Obama has said that he does not plan to use Netflix to wage a public campaign against current president Donald Trump or to fight against conservative media outlets.

While Apple did not secure a deal with the Obamas, the company has more than a dozen original television shows in the works at the current time. Most of the shows are dramas, with one real estate-related docu-series in the works. Apple does not have any politically-oriented shows planned, and is said to be aiming to keep its content family friendly.

Glad I cancelled Netflix.......
Reactions: rva, Hellenek, Naaaaak and 109 others

What is your favorite episode of CarPool Karaoke?
Reactions: imlovinit, Sen Yu, Jongstar and 87 others

They could have had a huge hit on their hands, yet they'll leave it to Netflix to suck up the views
Reactions: martyjmclean, mikeydeezy, rafark and 5 others

Either way will be refreshing to hear again from Obama. Boy, I miss him.
Reactions: imlovinit, Thomas Veil, TheHorrorNerd and 103 others
G

Obama was the most racist president in our history. Who encourages thugs to shoot cops? Who hires a painter that depicts the decapitation of white women to also paint his self-portrait? Who brings a Muslim kid who built a clock that looked like a bomb to the White House? Answer to all, Obama.
Reactions: rva, Hellenek, HMFIC03 and 96 others

Good, stop trying to create content and focus on what you were put on earth for.... computers.
Reactions: Hellenek, Naaaaak, alphacen and 50 others

macfacts said:
What is your favorite episode of CarPool Karaoke?
Click to expand...

The one where James Corden, the host, is on his show ― it's only 1 episode
Reactions: dan110 and HailstormX

Queue the comments of Trump fan boys angrily stating they would switch to Android if Apple got the deal. Only to realise few minutes later they now have to cancel their Netflix subscription... But then decide logic, reasoning and principles don't apply to them.
Reactions: TheHorrorNerd, Dana Beck, ginkobiloba and 70 others

GREEN4U said:
Obama was the most racist president in our history.
Click to expand...

Give me a break. 12 presidents kept black human beings as their personal property.
Reactions: imlovinit, Thomas Veil, iwoolman and 141 others

Can’t wait for this. I love that man. When the trash currently occupying the Oval Office is finally disposed of, he will never be remembered this fondly. He’s well aware of that, hence the reason he’s so fixated on Obama.
Reactions: imlovinit, Asarien, Dana Beck and 53 others
E

I really hope Apple have some big plans for their video streaming service. Netflix have some amazing content at the moment and Amazon have a few good shows as well.
Reactions: CasinoOwl, cashville2400, Kornbeef24 and 6 others
N

Politics aside this sounds awful.
Reactions: rva, Hellenek, HMFIC03 and 72 others

Personally, I’d been okay if Obama could have done additional terms.
Reactions: Dana Beck, imola.zhp, WarHeadz and 25 others
D

ActionableMango said:
Give me a break. 12 presidents kept black human beings as their personal property.
Click to expand...

I learned a long time ago you're better off ignoring people who think like this.
Reactions: jjhny, ActionableMango, imola.zhp and 31 others

I have zero interest in watching any former President have a show.... regardless of political affiliation. Zero. Zip. Nada.
Reactions: rva, markieG84, Dana Beck and 86 others
E

Glad I subscribe to Netflix!
Reactions: dilbert99, Dana Beck, imola.zhp and 43 others

GREEN4U said:
Obama was the most racist president in our history. Who encourages thugs to shoot cops? Who hires a painter that depicts the decapitation of white women to also paint his self-portrait? Who brings a Muslim kid who built a clock that looked like a bomb to the White House? Answer to all, Obama.
Click to expand...

You do know that those “decapitation” portraits showed a scene from the Bible, right? The same scene portrayed by many artists over the last 500 years?
Reactions: WarHeadz, CasinoOwl, mike0steff and 33 others
S

As much as I respect the Obamas, I think that this is beneath them. Seems like a money grab. There is much more important work to be done.
Reactions: Dana Beck, Agit21, coffeemadmanUK and 3 others
B

Too bad, you're missing out on some great original and exclusive content. In case you didn't know, as a Netflix subscriber ... you don't have to watch this show.
Reactions: duffman9000, imola.zhp, djames42 and 30 others

ActionableMango said:
Give me a break. 12 presidents kept black human beings as their personal property.
Click to expand...

Strictly speaking are you sure they were all personal property rather than company property?
Reactions: neliason

So, Netflix signed the most admired man in America to produce content. As a Netflix stockholder, I’m thrilled.
Reactions: imola.zhp, CasinoOwl, mike0steff and 17 others