9to5Mac reports that Apple will moving away from Google Maps services in iOS 6, making the transition to an in-house mapping service that included 3D views. According to the report, Apple's prior acquisitions of mapping companies Placebase and Poly9 are ready to bear fruit, with last year's purchase of 3D mapping firm C3 Technologies rounding out the suite of services.

The most important aspect of the new Maps application is a powerful new 3D mode. The 3D mode does not come enabled by default, but users simply need to click a 3D button that is conveniently and visibly stored in the app. Perhaps under the fold like the current traffic, pin, and map view buttons. This 3D mode is said to essentially be technology straight from C3 Technologies: beautiful, realisitic graphics based on de-classified missile target algorithms.
Click to expand...

Apple's in-house mapping services will otherwise be rather similar in appearance to the current Google Maps application, although Apple's implementation is said to be a "much cleaner, faster, and more reliable experience" and will include a new icon based on the same view of the company's Infinite Loop headquarters in Cupertino but with new colors and styling. 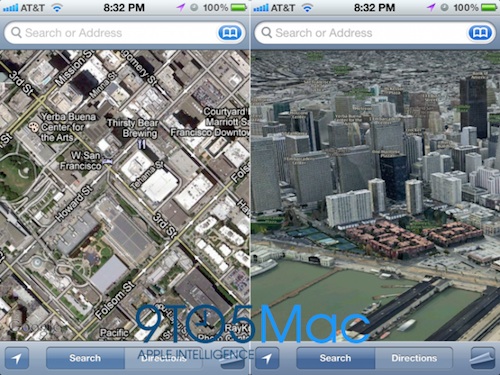 Current Google Maps aerial view (left) compared with mockup of Apple's 3D mapping mode (right)​
Apple has clearly been working for some time to reduce its reliance on Google by developing its own mapping services for iOS, as evidenced by its acquisitions of mapping expertise and job postings addressing its ambitions for mapping. The company has already moved location services in-house and revealed last year that it is building a crowd-sourced traffic database based on users' GPS data.

With the release of iPhoto for iOS back in early March, Apple took its first big step outside of the actual Google mapping services, taking advantage of OpenStreetMap and other services to generate its own map tiles for the application's Photo Journals feature.

Apple is expected to preview iOS 6 at next month's Worldwide Developers Conference in San Francisco, with the operating system presumably making its public debut alongside new iPhone hardware later in the year.

Update: AllThingsD says that it has independently confirmed the claim.

We've independently confirmed that this is indeed the case. Sources describe the new Maps app as a forthcoming tent-pole feature of iOS that will, in the words of one, "blow your head off." I'm not quite sure what that means, and the source in question declined to elaborate, but it's likely a reference to the photorealistic 3-D mapping tech Apple acquired when it purchased C3 Technologies.
Click to expand...

I hope they don't get rid of over head simple, easy to read 2d map altogether.

Cool. The new 3D perspective looks nice and it will be good as long as it's accurate. I'm concerned about data usage on a tiered data plan and the time it will take to render the images.
K

As long as they have a large database of points of interest as well as keep the maps updated, I don't mind too much.
X

I hope it isn't as awful as the iPhoto app maps. They were horrid and dated. I wish they could get along with Google as their maps are some of the very best.
T

really hoping for navigation. One of the things I miss most from my Droid.
J

Maps is in terrible need of an update. They definitely need to add turn-by-turn navigation.
I

Really? All that money and they are working on 3D? 3D is a gimmick. I want to see voice guided GPS. Is that too much to ask?
L

Meh, I'd prefer them to keep Google maps for the 2D stuff. I never really use 3D or street view. But maybe I'm just weird. Either way it does look cool, I just don't think I'd ever use it, and I'd prefer to stay with something that has worked great for me.

Ryox said:
I hope they don't get rid of over head simple, easy to read 2d map altogether.
Click to expand...

I see no reason why they would.

imthenachoman said:
really? All that money and they are working on 3d? 3d is a gimmick. I want to see voice guided gps. Is that too much to ask?
Click to expand...

I'll reserve full judgment to see how this is implemented (if it is true at all) and how well it works in the real world, but my knee jerk reaction to this is "uh oh".

The reason most people use Google Maps is because it is a really good product. If you are going to change away from that the alternative better match up and, based on what happened with the Open Street Map implementation in the iPhoto app for iOS, I'm not so sure that will be the case.
A

but will the map data be as good as google maps?

will I be able to zoom in to a random country outside of the US and have the detail that comes from google maps? considering that even bing maps is pretty poor at the moment I'm not holding out much hope for these maps.

I wonder if we'll be able to see Apple's walled garden?
B

I'm skeptical this can match Google Maps for Android, but if any company can compete with Google in a particular area -- its Apple.
T

ugahairydawgs said:
I'll reserve full judgment to see how this is implemented (if it is true at all) and how well it works in the real world, but my knee jerk reaction to this is "uh oh".

The reason most people use Google Maps is because it is a really good product. If you are going to change away from that the alternative better match up and, based on what happened with the Open Street Map implementation in the iPhoto app for iOS, I'm not so sure that will be the case.
Click to expand...

Streetview is really handy. We KNOW Apple don't have that data, and the iPhoto maps were really, really crappy.

If it works as good as those side by shots show, I cannot wait!

I use MapQuest on my iPhone now instead of my standalone GPS unit, and it usually works great, but there is one major problem with it that is a true shortcoming of iOS. It's not integrated into the OS. No GPS navi program is. There is GPS on the Google Maps app, but you have to have someone sitting there telling you what to do, or you have to read it while you drive, which is difficult and also a really stupid and dangeroug thing to do.

I want a built in maps app that will allow me to play music, but will interrupt the music to give me my next direction. On a long road trip if I need directions, I can't listen to music if I'm running MapQuest. Please, Apple, please build this. It's the one thing that makes me jealous of Android users.

This is a good thing for everyone, you could either use apple's mapping system or use the google maps app that google is inevitableaby going to make which would get updated more frequently with new features.
H

I'm all for change but will this be another "USA Only" thing? Leaving the rest of world and Europe out? Whilst this is great I would rather they update things like Siri to cover the UK or update iTunes with 1080 movies (yes I know its the content provider)
I

Bing Maps has this type of view, and it's fun to play around in but it's really only useful if you want to know what the side of a building looks like.
J

What if Apple used a slightly worse implementation in iPhoto for maps because they didn't want any spoilers for iOS6...

Based on this from SlashGear:

"OpenStreetMap confirmed that its data was being used back when iPhoto for iOS was launched, yet its taken this long for Apple to confirm the usage.

Having said that, Apple does seem to be using old map data. OpenStreetMap took to its blog back in March to say that the data being used was generated in April 2010."
Click to expand...

Streetview is really handy. We KNOW Apple don't have that data, and the iPhoto maps were really, really crappy.

One of the mapping company's that apple bought had street veiw type data.

And the maps in iPhoto were meant to look vintage and old because that was the style of the whole journal theme, it was not meant for a detailed map.
P

We need free navigation in iOS