Apple is continuing its major push of retail store openings, with three more coming this week in three different countries. With these grand openings, Apple will have opened 14 retail stores over the space of four weeks as it moves toward its goal of opening a total of 30 stores during the July-September quarter. 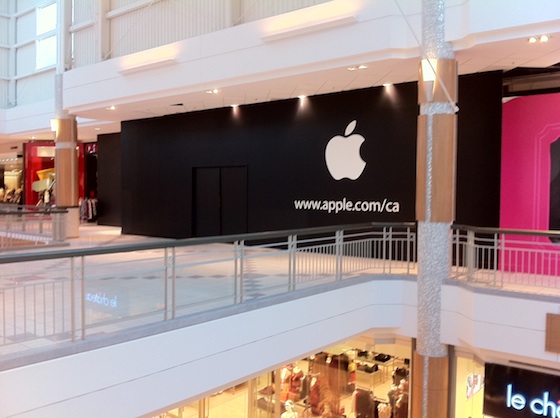 - City-Galerie (Augsburg, Germany): City-Galerie will be Apple's sixth German store and the second in Bavaria in the southeast of the country. The new store will join the existing Munich store just under 50 miles away.

- Campania (Naples, Italy): Apple's seventh retail store in Italy, the Campania store in the Naples metropolitation area is the first to open south of Rome. It is located approximately 25 km north of Naples in the Centro Commerciale Campania along the main Autostrada A1 motorway that serves many of Italy's major cities between Milan in the north and Naples in the south.

It is a surprise these stores became such a huge selling point for consumers. People seem to really like knowing that if they have a problem, just go to the apple store and it's taken care of
Comment

I wish Apple would build a store in State College PA. My closest store is a 90 Miles away.
Comment

It's another Apple Wwwwwwworrrrrrrrrld DOMination Weekend. I guess you could say Cook is putting another "niche" in Apple's belt.
Comment

My whole country doesnt have an Apple store!
Comment

Demand must be insane. I mean, new stores almost every week.

iPad sales will be through the roof over the next year. Count on it. And the result? It'll drive sales way up for Apple's other key products. Yes, Apple will need all these stores.
Comment
S

I don't understand why Apple won't open stores in Sweden. Stockholm, Malmö/Lund and Göteborg could easily support their own Apple Stores and Swedes are very design-conscious consumers willing to drop a lot of money on status items such as Apple electronics. Also, I'd like to petition for an Apple Store in Oxford, England. If Cambridge can have one, so should Oxford!
Last edited: Sep 1, 2011
Comment
M

As a Canadian, it's nice to see more Canadian stores. The closest one to me is still the Rideau store in Ottawa. As I've had to go there 4 times in 7 days (due to 2 back to back repairs), I know how much it sucks to drive hours just to get to one. Also hope to see more in the countries that really need them (large countries, in terms of land, and countries with few or no Apple stores).
Comment

I just wish they'd increase the size of the Apple Store in downtown Palo Alto.

C'mon, Steve, you know the one I'm talking about.

Amazed to also hear no stores yet in Sweden...the ultimate connoisseurs of design and style.
Comment
S

Apple stores are great for when there's something wrong with your machine and you want to receive great, in-person support.

Apple stores are awful if you want to actually buy something.
Comment
N

glad to have a store in Burlington. wish they had one in the pen center in st Catharines. buffalo is close to me but I hate driving over the border to get things done.
Comment
R

swedefish said:
Also, I'd like to petition for an Apple Store in Oxford, England. If Cambridge can have one, so should Oxford!
Click to expand...

The one in Reading just opened which is only twenty or so miles?
Comment
P

newdeal said:
glad to have a store in Burlington. wish they had one in the pen center in st Catharines. buffalo is close to me but I hate driving over the border to get things done.
Click to expand...

I don't think we'll see one in the Pen Center any time soon. Gotta be happy at least to drive to burlington instead of Buffalo or Mississauga though.
Comment

I wonder what Apple's criteria is for a store location. It seems some areas are blessed with several Apple stores in their vicinity whilst others must travel 999999999 miles to get to one.
Comment
D

Well they are where it matters - not in the dirty and poor Berlin... I still don't get why this junkyard has been made our capital.
Comment

Ontario has enough apple stores, three in Toronto alone, bring one to the maritimes. Us East of Quebec need to drive 9 hours to get to the nearest Canadian apple store
Comment
D

It's nice to see my mom's hometown of Augsburg, Germany get an Apple store.

Now when the hell will my hometown of Brooklyn, New York get one??? I see Apple products everywhere here.
Comment
A