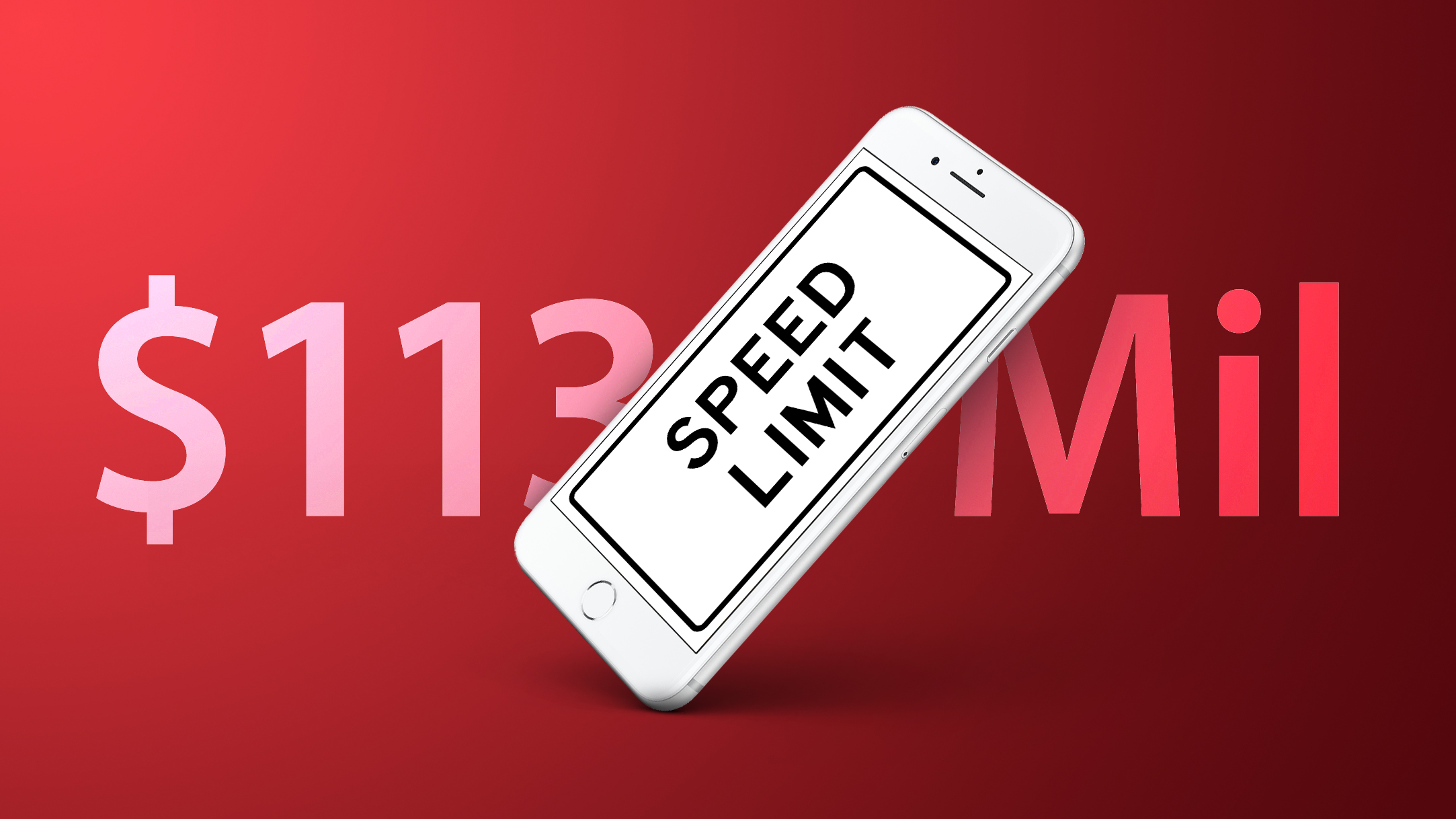 The investigation has now concluded, and Apple has opted to pay $113 million to settle the matter, reports The Washington Post. Apple has also agreed to be more transparent about similar changes to iOS devices in the future, providing more detail about battery health and power management.

"Big Tech must stop manipulating consumers and tell them the whole truth about their practices and products. I'm committed to holding these goliath technology companies to account if they conceal the truth from their users."
Click to expand...

The investigation involved 34 states and the District of Columbia, and it concerned the 2017 controversy that Apple was embroiled in after quietly adding a power management feature to iPhones in iOS 10.2.1.

Apple's feature was meant to eliminate unexpected shutdowns that older iPhones were experiencing due to exhausted batteries, but it did so through throttling the maximum performance of devices with chemically aged batteries.

Apple did not disclose the throttling when releasing the updates, and customers were outraged when it was discovered that iPhone performance was being downgraded. While Apple said that it implemented the feature to make sure iPhones lasted as long as possible even as the battery began to fail, customers and regulators saw it as evidence of planned obsolescence.

After the throttling was discovered, Apple apologized and launched a battery replacement program that saw the company offering batteries for older devices for $29. Replacing a failing battery successfully fixes the problem that leads to shutdowns.

Apple offered lower-cost batteries for a year, and also added new battery management features to iOS that encourage customers to replace their battery when needed and allow throttling to be shut off. Apple has also already shelled out $500 million to settle a class action lawsuit over the issue.

I thought they already settled this? I made my claim in July.
Reactions: rafark, SDJim, Stevez67 and 2 others
Comment

I wonder how Ja Rule feels about this.
Reactions: BreakingKayfabe and rjp1
Comment
T

dannyyankou said:
I thought they already settled this? I made my claim in July.
Click to expand...

Was it the $25 per customer Settlement? I also opted in to that class action (since the attorneys, somehow, knew I had purchased a qualifying Apple iPhone that was covered under the lawsuit).
Reactions: erniefairchild1 and SDJim
Comment

So Apple is paying $613 million to settle this fiasco. I missed my chance to get my $50. Oh well. What's a few hundred million amongst friends, I guess.
Reactions: BigMcGuire
Comment

Looking forward to a $3 settlement check as compensatation for me having to pay $800 to upgrade my phone. I used to upgrade every two years due to iphones becoming "slow." I've had my current phone for 3.5 years and it still feels snappy. No reason to upgrade it yet.
Reactions: Marlon DLTH :), rafark, Septembersrain and 1 other person
Comment
B

Frivolous. If they only messaged it better out of the gate, this would have been viewed as a good thing.
Reactions: Lazy, Marlon DLTH :), ackmondual and 12 others
Comment
T

PutTheFBackIn said:
I wonder how Ja Rule feels about this.
Click to expand...

He will say that’s peanuts for Apple lol
Comment
W

The posturing from the Arizona state AG about going against the goliath of big tech is a tad disgusting.

Save your stones for the real issues.
Reactions: Lazy, BugeyeSTI, KeithBN and 14 others
Comment

PutTheFBackIn said:
I wonder how Ja Rule feels about this.
Click to expand...

I bet he's on FYRE.
Reactions: PutTheFBackIn and Stevez67
Comment

The article forgot to mention that Apple went one step further and is optimizing battery charging in iOS so that it doesn't stay at 100% for too long. It learns when you usually begin using your iPhone for the day and charges the last 5-10% or so right before you need it. This should help maximize battery lifespan as well.
Reactions: erniefairchild1, KeithBN, SDJim and 3 others
Comment

They should have left people to let their phones suffer without power and sue about that?
Reactions: erniefairchild1, KeithBN, Jonathan Leclerc and 3 others
Comment

Slap on the wrist.

That's 0.197% of what they made last fiscal year.
Reactions: cjducasse, Solomani, PC_tech and 6 others
Comment
G

sw1tcher said:
Slap on the wrist.

Slap on the wrist? its the complainers that should be slapped. Apple did the right thing, perhaps they messaged it poorly, but in the end they were working to help older phones retain their ability to make emergency phone calls when power was low. And people who do not understand the technical facts just spread more falsehoods. Just goes to show, no good deed goes unpunished. Yep, I know, my position is unpopular. Oh well.
Reactions: Lazy, Solomani, BugeyeSTI and 17 others
Comment

I def understand how this looks bad but I do understand why Apple did it. I don’t think it was shady though Apple haters will say it is. They wanted to make sure people that keep their old iPhones can use them for years to come. They wanted to make sure they can them and not need to upgrade if they don’t want to. It was the opposite but people think it’s Apple intentionally slowly. Yes it’s technically true but with an asterisk.
Reactions: Solomani, erniefairchild1, G5isAlive and 2 others
Comment

Few know that Apple had, at one time, throttled Memory DE-allocation operations to slow down Perf !

They may OR may NOT still be doing it.

I do NOT know.

My main app has conditional code in it to deal with the issue in three places; I have NOT checked lately if it's (still) being triggered.

The main problem is that Apple had thought they sold us ALL a "Managed Device," when in fact, we own what we bought !
Reactions: rafark
Comment
M

sw1tcher said:
Slap on the wrist.

I have no idea what a "proper" amount should be. But it shouldn't be "High" just because Apple made a lot of money any particular year. It should be an amount that fits the specifics of the situation. Just like I shouldn't have to pay a lot more or less than someone else on a traffic violation because of my income. If $113 million is what the court is calling "fair", then so be it. They should pay what they owe, not a percentage of their annual income.
Reactions: Lazy, erniefairchild1, G5isAlive and 2 others
Comment

Profit Apple made forcing premature new device purchases far outweigh the fine so might be incentive to do it again.
Reactions: Knowimagination, erniefairchild1, rafark and 3 others
Comment

Do you want a new phone as well? Would adding a pony to that deal make you happy?

Apple haters need to give it a rest... it gets old.
Reactions: Solomani, JBGoode, erniefairchild1 and 4 others
Comment

Solomani said:
Was it the $25 per customer Settlement? I also opted in to that class action (since the attorneys, somehow, knew I had purchased a qualifying Apple iPhone that was covered under the lawsuit).
Click to expand...

MacRumors said:
"Big Tech must stop manipulating consumers and tell them the whole truth about their practices and products. I'm committed to holding these goliath technology companies to account if they conceal the truth from their users."
Click to expand...

This wasn't manipulation of customers, this is customers not understanding technology and nurturing their paranoid delusions about how the world is out to get them.
Reactions: kltmom, erniefairchild1, CarlJ and 5 others
Comment
L