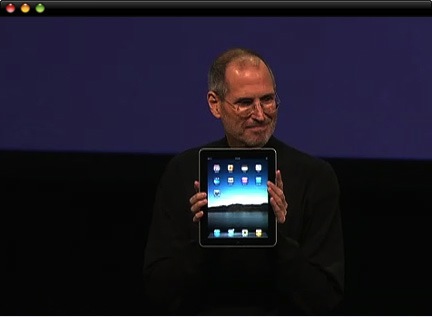 Apple has posted the January 2010 media event video stream from today which saw the introduction of the company's much-anticipated iPad tablet device.

First off, I have a MBP hooked up to an ACD 20" and I have an iPod Touch (I got for free from a friend).

I purchased the MBP for its portability but found I didn't really want to move it off my desk much and find it a bit cumbersome to take around the house or when i'm hanging out with my family.

The iPod Touch is easier to take around but the small screen size was starting to get to me. I didn't like doing anything on it, but it is nice to just plop into my pocket and have it handy for when I need to look something up or email.

Now, I was looking for something that was more powerful than the Touch but easier to surf , email, watch movies etc wherever I wanted in my house or on trips. I don't need this thing on the go, just need it to be easier to handle in my house than moving my MBP.

The iPad fits my purpose here, my other option was the Air. Considering the price difference and since I already have a MBP, the iPad might be exactly what i'm looking for. I don't need the iPad, I would just like to have it.

I'll probably just get the 16gb version and just move content on and off (in conjunction with my MBP 320gb HD). I don't see spending $100 for 16gb more of storage.

Great portability for surfing the web, watching movies, music, pictures, reading books.
IPS screen (nice)
Decent size compared with my Touch.
Easier to move around than my MBP
Looks pretty fast.
$500 isnt too bad of a price
Apps being developed for the iPad should be promising
Wifi (all I need, i'm only using it in my house or at work or wifi spots, i'm not paying for any more service, plus i'm not gonna be walking the streets with this thing)
Gaming - should be better than on the touch/phone. I personally don't play too many games anymore.
Nice battery (10 hours)

Won't replace my MBP (lucky I have one already) Its a complement to your main computer.
Where is the flash ? Won't that become an issue with truly taking advantage of all content on the web?
No camera (probably in next revision)
Minimal storage unless you go for the $700 version (not happening, i'll just have to swap content in and out)
Sort of like an iPod Touch (however, I didn't pay for my touch so I have the money saved for this device)
You depend on the Apps. Hopefully they will be better for the iPad (catering more to its screen size and power)
Some might need to purchase another 3G service
Cost could be an issue to some for the higher storage.
No multitasking (WTF !)

Overall, I can handle $500 for what I need this device to do. I think it will nice to have it around the house and use it on trips or at work during break. I have a MBP so I don't need another computer or to have it replaced, just something to complement the things I do.

I'll be honest, I was not too impressed. I still see it as a larger iPod Touch. I know its better etc, but if you break it down, its a touch with some more ability and potential.

If your ok with the pros and cons, then I say purchase it. If you were looking for something greater, consider just getting a Macbook or MBP. Its as simple as that.

wasn't this up a while ago? im like at the 20 min mark

Does any know if the dock with keyboard will work with the iPhone??
F

Stream won't play ...anyone else"

My stream has been trying to connect for 15 min. Tried low, med and high to no avail. Even did a reboot.

winks360 said:
Does any know if the dock with keyboard will work with the iPhone??
Click to expand...

Not likely. Maybe when the iPhone goes to OS 3.2? Can't hurt to try it when it comes out.
D

I really really want the keyboard dock with my iPhone will this work!!! I need to know!!!
T

Who cares about the stream now? What a truly disappointing huge iPod touch device.
K

im waiting to see this on my big HDTV via TV.
anyone know how long it takes for them to post these keynotes to the "keynotes" podcast?
D

Anyone know how to find the dl link from Apple of this event video? Is it from the podcast which should be posted later, or some other source?

Anyone know how to find the dl link from Apple of this event video? Is it from the podcast which should be posted later, or some other source?
Click to expand...

should be a direct akamai link
M

theheadguy said:
Who cares about the stream now? What a truly disappointing huge iPod touch device.
Click to expand...

Why are you here then? If you don't care, don't look inside this thread and post. Why are you wasting your time?

People want to watch the stream in its full for their own reasons. They don't care what you think or feel about it.

I got what I wanted: a bigger-screen iPod Touch, for use at home and for 90% of my laptop outings. Apple’s great touch interface looks like it works amazingly well with larger-size apps and games.

I didn’t expect it would be cheap enough to actually get the thing I wanted, though. $599 for 32 GB will do great for me, and even 16GB is enough for most people.

I was hoping to learn more about the next-gen iPhone OS (4.x?) but I guess that was not the focus of this event.
A

brianj1400 said:
My stream has been trying to connect for 15 min. Tried low, med and high to no avail. Even did a reboot.

No idea, mine isn't working either

I have a question though, now that we have the iPad, is there going to be an "iPad" tab up there next to the "iPhone" tab?
L

Steve still looks frail and thin. Definitely has lost a lot of energy. I can't help thinking that he is sitting on the chair because he can't stand that long.

btw. The iPad will do very well.


theheadguy said:
Who cares about the stream now? What a truly disappointing huge iPod touch device.
Click to expand...

What's funny is Steve Jobs actually CALLS the iPad an iPod at 29:30ish on stage at the Keynote: "So that's a little bit of an overview of the iPOD's hardware."

Some people think the iPhone/iPod Touch is the reason you dont want something like this.

For me, the iPhone is what made me know I do. It works greatnow make it bigger (and faster, with more battery life).

Not everyone can make do with a tablet instead of a laptop (Im keeping my Air for sure). But a whole lot of people canand will find it more usable, in fact.