Apple has just released iOS 8.0.2, its second update to iOS 8 designed to fix major issues introduced with iOS 8.0.1, which went out to iPhone owners on Wednesday.

iOS 8.0.2 is available immediately as an over-the-air download and in addition to fixing the cellular issue introduced with iOS 8.0.1, it also includes the bug fixes that were included in the original iOS 8.0.1 update. 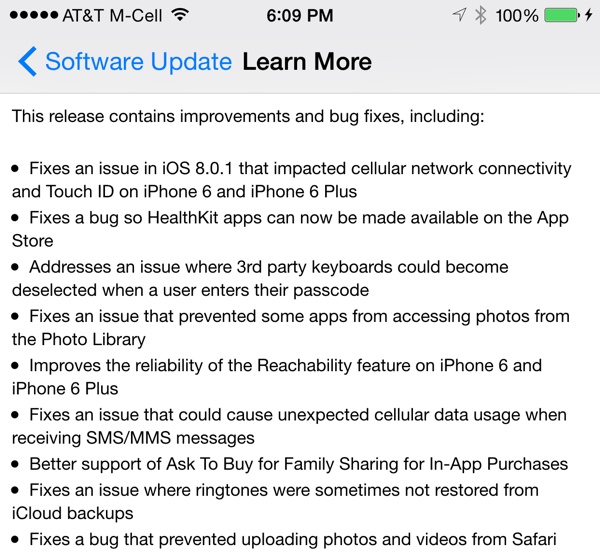 After installing iOS 8.0.1 yesterday, many iPhone 6 and 6 Plus users found that their cellular service was disabled and that Touch ID was non-functional. Apple pulled the iOS 8.0.1 update approximately an hour and fifteen minutes after it was first released, but not before numerous iPhone users were able to download the software. The company announced an investigation in the afternoon, and in the evening, released a support document saying iOS 8.0.2 was in the works and directing users to fix the problem via an iTunes restore to iOS 8.

iOS 8.0.1 contained a fix for a major HealthKit issue that was discovered just before the public release of iOS 8, prompting Apple to remove all HealthKit enabled apps from the App Store. Following iOS 8.0.1 and iOS 8.0.2, these apps will be able to return to the App Store. The updates also bring fixes for third-party keyboards, Reachability, Photo Library, SMS/MMS messages, and more.

Update: According to Apple, less than 40,000 iPhone 6 and 6 Plus devices were affected by yesterday's iOS 8.0.1 bugs. Apple has also issued an apology alongside the release of iOS 8.0.2:

Let us pray this one is ok.
D

Since I made the mistake of grabbing 8.01 as soon as it came out i've had the following missions...

Downloading the 2gb iPSW 8.0 restore file from Apple's battered servers for 18 hours, which kept timing out. Eventually find a link to a different Apple server on iClarified and grabbed it at full speed (which still took 2 hours to download on my connection)

Then I backed up, and this is my fault (although I wouldn't' be in this position were it not for the terrible update!) id recently run OmniDiskSweeper and deleted the 40gb of mobile apps that were filling my rMBP up from backups from various devices. Id foolishly then not updated the links in iTunes had I, and iTunes is not clever enough to check if the file actually exists before doing a back up. So I clicked to backup the apps thinking it would grab them all off the phone, only to find out iTunes thought it still had them and didn't realise it didn't until it came to restore the phone and it said 200 apps were missing... (it had only grabbed my recent updates)

So now I try an iCloud restore, my last resort if I can help it, knowing its going to take possibly days on my connection. I load it, and it all the apps are greyed out - but they won't download. Not at all. I press on them, nothing, says "waiting" then just stops. I tried everything, troubleshooting wise I could find online. I went into the app store and triggered manual downloads, but all the app data was then deleted...

So I dig out a Time Machine backup thinking I may still have the .ipa files - and low and behold there they are (thanks Time Machine!) I restore them over my network (2 hours....) after 2 hours is up I restore to 8.0 for the 4th time today, do my touch ID for the forth time today, enter my e-mail passwords, my iCloud passwords, my iTunes passwords, my keychain code, my Facebook password, my twitter password zzzz (I wish it remembered all these from the restore just by entering one password to load them all back up!)

And finally, finally, its spending 2 hours copying all the apps back off the computer (over lightning's USB2...sigh) and in the middle of that a tweet pops up "iOS 8.02 is released now" - FML
Last edited: Sep 25, 2014
F

So who is going to be the guinea pig, haha?

I am not installing without hearing from others first!

Yeah, if someone could go ahead and test this for us all, THAT'D BE GREAT.
N

Damn, they were quick!
P

Bring on the healthKit apps!

It's not showing up under general for me on my 5S

I think I am going to wait... for about 8 more pages in this thread before upgrading.

Is it coming through OTA for anyone?
N

Dekema2 said:
It's not showing up under general for me on my 5S
Click to expand...

Edit - there it is

Though I was one of the ones who downloaded it to my iPhone before it was pulled, I don't have any issues with my 5s, which was later reported to not be affected.

I think I'll wait until the morning for this one.

Here's to hoping it fixes the performance issues of the 6 Plus.
P

Broph said:
Yeah, if someone could go ahead and test this for us all, THAT'D BE GREAT.
Click to expand...

Yeah, I don't trust Apple's QA, but if one or two anonymous MR posters says its good that's enough for me.
D