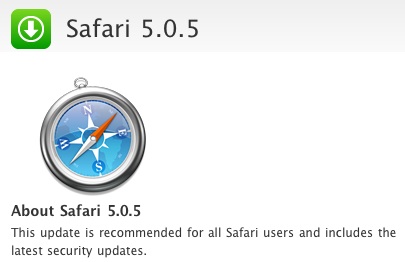 Alongside today's release of iOS 4.3.2, Apple has also pushed out Safari 5.0.5 and Security Update 2011-002 for Mac OS X. The updates are available through Apple's download pages and through Software Update.

Apple's download notes for Safari 5.0.5 indicate only that the update includes the latest security updates.

Security Update 2011-002 is available as a small update for Snow Leopard systems, while the Leopard versions are much larger and incorporate additional changes that were previously made to Snow Leopard.

Important but not exciting

i hope i can load the facebook games faster on this new version of safari.

Wow, those are huge updates for Leopard folks.
Last edited by a moderator: Apr 14, 2011

Firefox is so bloated these days. I recently switched over to Safari after using Firefox for the last 6 years.

Shouldn't Safari updates move to the app store [TM] eventually? It's not part of the OS.

Has the update caused headaches for someone? I know it's causing me headaches. Can't go into main system and I am stuck at login page. If I do manage to go in, the entire system crawls to a halt after a minute. This was right after the "update".

Installed both and restarted. Every things working without a hitch.

ten-oak-druid said:
Shouldn't Safari updates move to the app store [TM] eventually? It's not part of the OS.

It installs with Leopard, Snow Leopard, and Lion (and I'm pretty sure it installed with Tiger as well). Meaning there's not a box to uncheck to not install it, so yes, it is actually part of the OS. No one is forcing you to use it though.
R

Try Safari or Chrome, then try to go back to Firefox. It's a horrible piece of software on OS X and always has been.
A

-Ryan- said:
Try Safari or Chrome, then try to go back to Firefox. It's a horrible piece of software on OS X and always has been.
Click to expand...

I just updated Safari, and am actually pleasantly surprised.

More usually I've used Opera, preferring that over Firefox in overall appearance, and also responsiveness. Safari, at least with me, has been an also ran in this contest, as seeming terribly slow. But of late have not had much patience with it, and certainly no expert.

But in curiosity after this update my initial impression is that now, strangely or not, it seems quite snappy. No further testing beyond that, although nice to have another alternative.

All the more as I am cheesed with Opera at the moment, with their recent forced update to version 11.0. I'm not a power user with any of these browsers, but immediately noticing two dis-improvements to Opera. One that their full screen view of pictures no longer is, and also they helped themselves to my bookmark list to add some of their own at the bottom (apparently unmovable), and I do not appreciate this blatant product placement/advertising. They do boast that Opera is faster now, and maybe it is, but it hardly helps when the first thing their customers notice is that now missing, or added without asking, and not wanted. I'd also note that about the only reason I've used Firefox is because at times Opera will simply not do something, which in every case Firefox always has. For instance, being able to access Apple's site, but inability to use their navigation at top of page; that persisted for several days (and no issue with Firefox) and then, as other anomalies with Opera have, ceased to be an issue. Still like them, but they are beginning to press their luck.

Might be reason enough to give Safari another look.

I wonder if this update will fix the random crashes I've been having with Safari...

Just doing little things, like opening a new tab whilst Facebook is loading in another etc (no flash or anything) - then Safari would just 'quit' and tell me to report it.

It feels blazing fast and I think my computer even loads up faster now.
A

vincenz said:
Firefox is so bloated these days. I recently switched over to Safari after using Firefox for the last 6 years.
Click to expand...

Agreed, Firefox is pure rubbish. I use Chrome and occasionally Safari.
I

thank you software update, for reminding me safari exists, sometimes i forget.

Funny I was listening to a episode of Security Now and they were explaining the whole Comodo ordeal. Important update!

Anyone else having trouble getting to the download for Safari 5.0.5?

and it instantly redirects to

Odd. I haven't found an alternate way to navigate to the download. Any suggestions?

Why not go to the Software Update? (Assuming you're on a Mac) Try this link to see if it goes to the direct download: https://swdlp.apple.com/cgi-bin/WebObjects/SoftwareDownloadApp.woa/wo/DkjY3SR45XSxPvrzhWHrG0/2.5
M

Yell0w said:
i hope i can load the facebook games faster on this new version of safari.
Click to expand...

That would be an issue with Flash rather than Safari - then again my sister (who is a big Facebook user) hasn't noticed a slow down.


ten-oak-druid said:
Shouldn't Safari updates move to the app store [TM] eventually? It's not part of the OS.

Because firstly the appstore doesn't deal with applications that require admin privileges and secondly Safari provides more than just a browser it also provides a series of frameworks for various parts of the operating system and third parties to rely upon.

How is it confusing that Firefox developers ranted and raved about hardware accelerated layers and here we are in 2011 and the performance is WORSE than it was 5 years ago. Firefox is riddled from top to bottom with bugs that not only are Mac related but related to rendering and so forth - any one worth their while could easily read through the mountain of bugzilla reports to see Firefox developers refusal to fix long standing bugs in their code.

Sorry, but for all Safari's faults I'd sooner stick with something that performs well than simply running off to Firefox to feel as though I'm 'stick it to the man'.
A

Firefox 4 loads pages faster than Safari 5 on my Macbook Pro. I am not sure what you guys are experiencing.
I

Azadre said:
Firefox 4 loads pages faster than Safari 5 on my Macbook Pro. I am not sure what you guys are experiencing.
Click to expand...

Firefox is still unstable. Try opening 90 tabs and it crashes almost 80% of the time. My Safari doesn't crash even with 200 tabs.